For months I had been planning a dive trip at Cayman Brac, one of the Cayman Islands. My nonpilot "co-pilot" Lynn and I have gone on many dive trips in my Piper PA–32-260 Cherokee Six.

For months I had been planning a dive trip at Cayman Brac, one of the Cayman Islands. My nonpilot “co-pilot” Lynn and I have gone on many dive trips in my Piper PA–32-260 Cherokee Six. (Please note that Lynn is a male. For some reason, my wife of 25 years won’t let me go on flying/diving trips with single females.)

Our friends and diving companions Amy and Bob would accompany us on this trip. It would be our longest stretch over water—and out of sight of land. The Cayman trip was preceded by 15 hours of flying over a period of about four weeks while getting an instrument proficiency check. I felt very comfortable with the aircraft and the fairly new Garmin 430 GPS with a Latin America database update.

The airplane is based at Herlong Recreational Airport in Jacksonville, Florida. We decided to break the trip into two three-hour legs over two mornings: Friday to Marathon, Florida, and Saturday to Cayman Brac. On Saturday morning I completed a thorough preflight inspection, did an extensive flight briefing, and we all put on our life vests. We departed at 9 a.m. Because of our initial weight (3,350 pounds with a max gross of 3,400 pounds) we had asked for and received permission from Cuba to overfly its airspace at 4,000 feet. I am a member of Caribbean Flying Adventures, and the annual membership includes one Cuba overflight permit per year.

At Cayo Largo del Sur, a small island south of Cuba, we made the left turn toward Cayman Brac on Victor airway A511 and left the comfort of land. About 75 nm from Cayo Largo I asked Havana Center if I could climb to 6,000 feet, because it was getting quite warm outside. The controller approved the request and I increased power slightly and began a slow ascent.

All was well—until 5,500 feet. At that point the airplane experienced a sudden—and unexpected—prop overspeed that was severe and estimated to be 3,000 rpm. Redline on this Cherokee Six is 2,700 rpm. I lowered the nose, immediately pulled the propeller control aft, and retarded the throttle. There was absolutely no control over the prop. Nothing!

I contacted Havana Center again and requested 3,000 feet. They approved it and asked if I wanted to declare an emergency. I said, “No, but I will give you a position report to LESOM every five minutes.” They asked if I was having any difficulty with the other engine—and I said, “No, there isn’t another engine!” They also asked me if I had a raft and what color it was. “The outside is yellow—but I don’t know what the inside is—and I don’t want to know!” The Cuban controller laughed at that one.

When I arrived at 3,000 feet the rpm stabilized at 2,000. Manifold pressure was 23 inches, and I told my passengers that we were good for now but I might be able to make it perform a little better. They all said pretty much in unison, “Don’t touch it!”

During the descent I briefed everyone twice on what we should do if we had to ditch the aircraft. With this power setting we were flying at about 95 knots, and we continued to monitor the rpm and the oil pressure gauge very closely. We were handed off to the Gerrard Smith International Airport tower about 45 miles from “the Brac.”

The tower cleared me for a left base for a visual landing on Runway 9. I asked to maintain 3,000 feet until over the field and then circle to land. The controller approved that request and asked again if I wanted to declare an emergency. I again said, “No.” We landed without incident and taxied to the ramp. They had the emergency equipment out of its garage but not on the runway or taxiway.

With help from a mechanic who works with Cayman Airways, we ordered and installed a new prop governor on the airplane. It didn’t work, either. We
then determined that the shaft was separated inside the engine because the female spline that powers the governor didn’t turn with the prop—but you could turn it with your fingers.

We shipped the engine to Don George Aircraft Engines in Orlando, hoping to get it rebuilt. When he started taking off the accessories, he discovered some “foreign objects” in the accessory case. He also discovered the close encounter with a case puncture a few inches from the oil filler. We probably will never know if this was caused by the prop governor shaft separation or other damage resulting from the overspeed. The airplane is still on Cayman Brac at this writing, with a factory-rebuilt engine installed “temporarily.” We have to lift the engine again so that we can remove the short threaded bolts on the dynafocal engine mounts that came with our 1965-manufactured engine—the new engines don’t come with the mounts. We are flying back to “the Brac” to complete the installation, install the prop, and do the ground checks and break-in flights—and then head back to Florida.

Like many pilots, I suppose that I was hesitant to declare an emergency. The engine was still delivering power and the propeller rpm stabilized by reducing the throttle and lowering altitude. Communication was good, and I could not expect any help as we were still almost an hour from land. However, I never again will hesitate to declare that dreaded emergency. Thankfully, the engine held together, and the fire and safety equipment was ready—if I needed it—at Gerrard Smith International.

The lesson that is taught many different ways to pilots is to first and most important, fly the airplane! I had been taught this, so aviate, navigate, and communicate was what I did. We had a calm crew and a stable airplane and were able to avoid a water landing in a fixed-gear airplane that might have ended quite differently than Captain Sully’s “Miracle on the Hudson.” 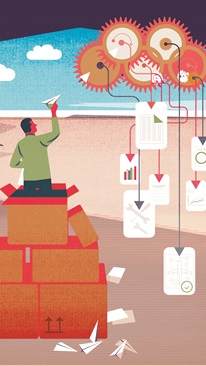