Get the app Get the app
AOPA will be closed July 4th, in observance of the Independence Day holiday. We will reopen at 8:30 am ET on Tuesday, July 5.
News & Media Pilot Briefing

Gyro or fixed-wing? Flying cars progress in the Netherlands, U.S. If flying cars become a reality, drivers will have to become certificated pilots.

If flying cars become a reality, drivers will have to become certificated pilots. Which do you think they would rather be, an autogyro pilot or a fixed-wing pilot? Those appear to be the two choices, based on recent test flights in the Netherlands and the United States. 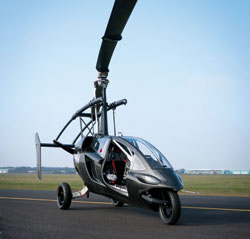 In France the Pal-V One (Personal Air Land Vehicle) flying car converts from car to gyrocopter and has flown successfully. In the United States a production prototype of the Terrafugia made a recent flight around the pattern and is a more traditional Light Sport aircraft with electrically folding wings.

On the ground, the Pal-V claims to be the sportier of the two and is shown roaring around a test track, while the Terrafugia video shows a suburban grocery-getter slipping sedately out of the family garage. An electric motor raises the heavy mast and rotors of the Pal-V, which has a cruise speed of 68 mph, compared to 105 mph for the Terrafugia Transition. The Pal-V tail is extended manually for flight.

Terrafugia says it has overcome the question of highway approval. Pal-V expects to have an easier time of getting highway certification, since it has only three wheels. When ready for the public, the Pal-V will sell for $250,000 while the Terrafugia is currently priced at $279,000.

Former U.S. Air Force test pilot Keith Colmer will be one of the astronaut pilots to carry tourists on suborbital space flights for Virgin Galactic.

Colmer, who has combat and test-flight experience as well as experience in spacecraft operations, was selected from more than 500 applicants to be the first to join the commercial spaceline’s flight team, Virgin Galactic officials said. He will begin flight training and testing with chief pilot David Mackay.

Colmer, whose call sign is “Coma,” is a graduate of the undergraduate space-training program at Lowry Air Force Base and the Euro-NATO Joint Jet Pilot Training Program.

Birthday bash for the Piper Cub

Lock Haven, Pennsylvania, is the place to be in June to wish the Piper Cub a happy seventy-fifth birthday. The twenty-seventh annual Sentimental Journey to Cub Haven Fly-In, from June 20 through 23 at William T. Piper Memorial Airport—where the iconic J–3 was first produced—will “celebrate the Platinum Jubilee of the Piper J–3.” Even the airshow will feature a Cub: Greg Koontz and The Alabama Boys’ J–3 flying comedy act.

Thousands of visitors lined the parking lot of the National Air and Space Museum’s Steven F. Udvar-Hazy Center for the final approach of the space shuttle Discovery. After 27 years of space travel, Discovery has landed at its retirement home in the Virginia museum. It left the Kennedy Space Center in Florida April 17 and overflew Washington, D.C. landmarks to the cheers and applause of well-wishers, who are saddened by its end.

Seen from the air : Aerial photography honored in stamps

Photographs by satellites and aerial photographers, some of them featured over the years in AOPA Pilot, will be used on stamps honoring aerial photography to be issued in October. The series is called Earthscapes, and includes 15 stamps with different scenes. One shows the Grand Prismatic Spring in Yellowstone National Park and was taken by Jim Wark who was featured in December (“A Window to the World,” December 2011 AOPA Pilot). He had four other photos chosen for the new stamp series, including towboats in a river, apartment houses, a foggy Stagecoach Butte in the Monument Valley Navajo Tribal Park, and a railroad roundhouse. 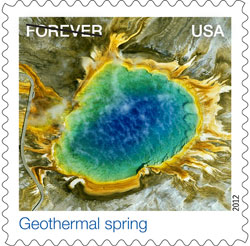 Another was by Cameron Davidson, who has also photographed articles for AOPA Pilot. His photo chosen for a stamp was an aerial view of a creek in an inland marsh that winds through the Blackwater National Wildlife Refuge on Maryland’s Eastern Shore.

A photo of colorful salt evaporation ponds by Barrie Rokeach of San Francisco was chosen for another of the 15-stamp series. Algae causes the ponds to take on vivid red colors. Rokeach has been mentioned several times in Pilot starting in 1993.

Other photographers contributing stamp photos include Tom Brakefield of Hendersonville, Tennessee; Richard Hamilton Smith of Park Rapids, Minnesota; and Steve Dunwell of Boston. Brakefield shoots from a microlite kite, while Smith uses a rented Cessna 172 and Dunwell uses a helicopter. Brakefield contributed a photo of log rafts on a river, while Smith flew over a cherry orchard and Dunwell hovered above floating cranberries during harvest. Other photos in the series were from a stock photo agency that has lost the name of the photographers. You can buy all the stamps starting October 1.

Convective season is upon us. The Air Safety Institute rolls out Storm Week June 11 through June 15. Each day during Storm Week, learn how to improve your ability to read the weather, understand how ATC and weather briefers can aid you, and when to say no to a flight. ASI is also rolling out a new thunderstorm weather webcast with renowned subject experts and panelists, and several other products such as a storm quiz and “Ask ATC” video. 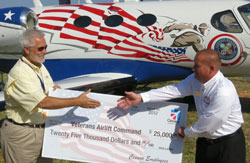 First they built and painted the jet to carry injured veterans and their families, then they raised money for the trips. Cessna employees made T-shirts they could sell to raise money for the Veterans Airlift Command, then they bought the shirts themselves. Turns out you can buy one, too, to leverage their efforts.

Veterans are often recuperating hundreds of miles from their families, and benefit from free transportation offered by aircraft owners nationwide, including Cessna.

The Cessna aircraft is designated American Patriot and has a paint scheme featuring a heroic character dubbed Patriot Defender, who some say reminds them of the comic book hero, Captain America. It is featured on the T-shirt used to raise $25,000. There were no sales outside the factory.

Veterans Airlift Command (VAC) Air Boss Walt Fricke was stunned. “I thought Cessna must have kicked in, but no, it was all employees.” Fricke, shown on the left in the photo taken at this year’s Sun ’n Fun, received the check from Cessna’s Brian Rohloff, the business leader for the M2 and Mustang.

“We wanted to demonstrate the pride we felt in the Citation Mustang product, and also wanted to figure out a way to show support for the VAC and their mission,” said Ashley Parks, Cessna employee and project coordinator for the American Patriot T-shirt fundraising campaign.

If you would like buy one of the shirts, contact Andy Woodward, Cessna manager of external relations, at [email protected]. He has bravely agreed to handle sales in addition to his regular job of acting as spokesman for Cessna.

Aviation icon and World War II hero R.A. “Bob” Hoover celebrated his belated ninetieth birthday March 26 to 28 at a Texas-sized party surrounded by friends from across the country. The celebration, coordinated by Bill Fanning of the Pilot Insurance Center, was the sort of party any military aviator would be proud of, regardless of what decade they may have first flown. 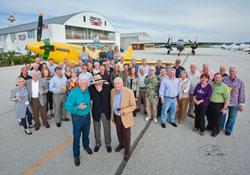 According to Fanning, a lifelong friend of Hoover’s, the gang of aviation personalities took over the Hangar Hotel at Fredericksburg, Texas; had an evening event at the Nimitz Ballroom in the National Museum of the Pacific War; and another night rented the entire town of Luckenbach, Texas, where a band kept the party going all night.

Among those attending were various FAA officials, including former administrator Randy Babbitt; leaders from among the FBO and fuels business; air racing aficionados; and astronauts and fellow aviators Neil Armstrong and Eugene Cernan, the first and last men to step on the moon.

Hoover made a thunderous arrival via Cessna Citation, with his personal and famed yellow-and-green P–51 Mustang Ole Yeller in formation.

As part of the celebration, the FAA presented Hoover with the gift of an intersection named BHOOV on the VOR Runway 11L approach to Torrance, California, Hoover’s home airport for many years.

After general aviation was nearly obliterated during the Cold War, the Russian government said in a paid supplement to the Washington Post that private aircraft are a vital part of the country’s transportation system. Still, there is much to do.

The country’s 300 largest airports, used only by commercial airliners, “do not welcome light aviation.” That leaves 500 airports in Russia, compared to 5,400 in the United States, that “do accommodate small planes,” the article said. The government began to open its airspace in 2010, leading to current claims of support for general aviation. The lowering of restrictions on airspace appear to be working, says Vladimir Tyurin, chairman of the board of Russia’s Aircraft Owners and Pilots Association. Tyurin has met officials of the American AOPA. Tyurin said the number of no-fly zones is 400, down from 1,200.

In February, Prime Minister Vladimir Putin said “light aviation” is the only way for a country as vast as Russia to connect its various regions. Pressure to open the air traffic system is coming from those wealthy enough to own aircraft, and those who fly as a “hobby,” the article said. The article showed a picture of a 12-passenger tailwheel Antonov AN–2, a 105-knot biplane, and called it a “popular option” for private aircraft owners in Russia. It was in production from 1947 to 2002.

The FAA is a critical participant in continuing research to develop an unleaded aviation fuel, the presidents of five aviation associations—including AOPA—said recently in a letter urging congressional support for funding in the agency’s fiscal 2013 budget. The association leaders urged support for a $1.995 million funding level that would continue progress toward the “complex transition” of the general aviation piston aircraft fleet to an unleaded fuel.

They also urged committee support for the work of the Unleaded Avgas Transition Aviation Rulemaking Committee chartered by the FAA in January 2011 to study the avgas issue and provide recommendations. That work has been completed, and the panel’s report is expected to be released soon.