Get the app Get the app
Already a member? Please login below for an enhanced experience. Not a member? Join today
News & Media Technique: Fly the Box

The world of primary flight training is in the process of a long-overdue major transformation, thanks in part to some incredible technology and ingenuity. Simulation is now capable of doing what it’s done for major airline pilots for years—making the airplane a transition training device only. Given their high degree of visual fidelity and other gee-whiz features such as motion, these benefits can now be realized for every pilot, from beginning student to ATP.

A recently formed partnership between simulator standout Frasca and Sporty’s Academy (the flight training arm of Sporty’s Pilot Shop) is a perfect example of how much the technology has moved forward. Sporty’s is using a Frasca Mentor flight training device with three screens in a Garmin G1000 configuration. The simulator’s purpose is to test how best to integrate these types of training devices into the primary training curriculum. While it’s always been clear that simulation offers benefits, these benefits have typically been recognized only in the instrument training course—and even then, there has always been confusion on how best to integrate them into the curriculum. 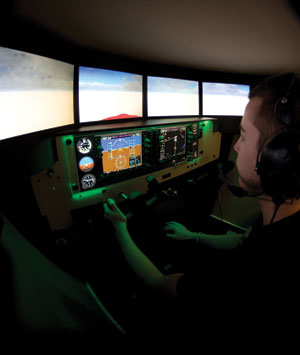 As an example of the amazing capability of these new devices, Sporty’s isn’t starting in a portion of the instrument course. It’s actually flying student pilots in cross-countries, using pilotage. And it works. As students progress and the academy starts to write more protocols, they’ll be concentrating on stalls, steeps turns, slow flight, and ground reference maneuvers. It may seem odd to do turns around a point in a simulator, but the training is very effective.

A study conducted at Embry-Riddle Aeronautical University in Daytona Beach a few years ago using Frascas found that students who became proficient first in the simulator were able to complete—to practical test standards—tasks in the airplane faster than those who trained solely in the airplane. Translation? Simulator training with such detailed visuals makes training cheaper, faster, and more efficient.

The folks at Redbird obviously agree, which is why they are testing the concept of simulator-first training at their new Redbird Skyport in San Marcos, Texas. Although the team is taking the tests seriously and waiting to divulge any complete details until each study is complete, company founder Jerry Gregoire says that early results show pilots obtaining a private pilot certificate with fewer than 35 hours in the airplane. (The Skyport is using a special FITS-approved syllabus that allows them to train to proficiency instead of hours.)

Software advances also are enabling much more effective transition and avionics training. Mike Altman, the CEO of Precision Flight Controls, says there are finally solutions on the market that exactly replicate the capabilities of a Garmin 430/530. Previously, if a simulator company wanted to have a “real” 430 or 530, it had to buy a simulator-specific unit from Garmin—which Altman said costs twice the price of a standard panel-mounted version. But with software, it’s now possible to replicate the functionality of popular avionics for considerably less. Altman calls it, “No excuses software.”

So now instead of burning time on the Hobbs meter, pilots can get in a simulator and practice button pushes without workarounds, something that’s not usually even possible in the multimillion-dollar simulators. And between software solutions and heavy competition, prices on simulators keep coming down, making them more attractive for smaller flight schools.

Gregoire said adoption of Redbird’s various simulators has been very strong, and is only being held back by the availability of financing for small businesses. As the economy improves and lending eases somewhat, the message from Gregoire is to expect simulators in a lot more schools.

What’s more, Gregoire thinks we are just scratching the surface on what these devices are capable of. “The real impact will be three to four years away,” he said. “We’ve just started to see where it will come from.” For Redbird that means building aircraft-specific simulators for a fraction of the price of corporate training standbys such as FlightSafety.

John Frasca, the president and CEO of the simulator company his father started more than 50 years ago, is more measured in his assessment of the future. He said he thinks the visuals will continue to get better. Already the simulator at Sporty’s is loaded with detailed satellite photos of the area within 150 miles of the school, which makes those cross-country training flights just like the real thing.

For Altman, software that exactly recreates the real device is the key to a positive transfer to learning, and an area of growth for simulator companies. Even today, PFC’s devices are sophisticated enough that some King Air recurrent training is happening in them.

No longer is the GA simulator relegated to the fallback position of only being used when the weather is lousy. Today’s devices are incredibly sophisticated, very realistic, and good enough for just about any training you can imagine. If it’s good enough for the rigorous airline training environment, we can probably stand to learn a thing or two in “the box” as well.