Get the app Get the app
Already a member? Please login below for an enhanced experience. Not a member? Join today
News & Media From first ride to 2nd Lt.

From first ride to 2nd Lt. 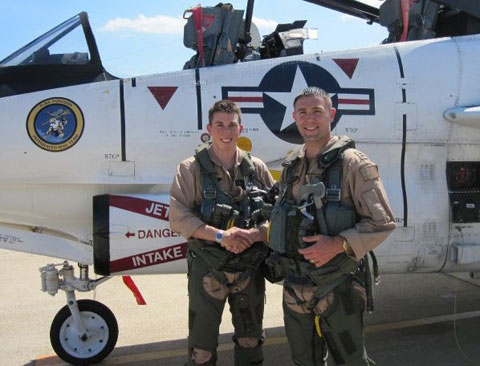 Nick DeLuca (left) with his instructor.

After a ride in a family friend’s Cessna 172 instilled a lifelong fascination with aviation in 6-year-old Nicholas DeLuca, the youngster set his sights on the goal of becoming a fighter pilot.

Eleven years later, Deluca confided his dream to neighbor Bob Talarczyk, a general aviation pilot and a client of the high-school student’s lawn-mowing venture in their New Jersey community.

Talarczyk, active in AOPA’s programs to help student pilots succeed, believed strongly that aviators should act as mentors for the next generation. He offered DeLuca this advice: Set yourself apart from the competition by earning a private pilot certificate as soon as possible.

DeLuca saw the wisdom. When he wasn’t otherwise occupied earning straight A’s in school and having some fun on his skateboard, he ran with Talarczyk’s advice, signing up for flying lessons at the airport in Bentonville, Ark., where his family had soon relocated.

By the spring of his senior year in high school, DeLuca had earned his private pilot certificate at the 47-hour mark, passing his flight test in a Cessna 152.

On June 6, 2012, DeLuca recalled those pivotal episodes of his lifelong journey in aviation in an AOPA interview given shortly after he participated in another graduation—this time from the Naval Academy in Annapolis, Md., commissioned as a U.S. Marine Corps 2nd Lt., with pilot training in his future.

First there are other milestones ahead for DeLuca, who majored in aerospace engineering and led an academy team that designed and demonstrated a solar-charged, night-flying surveillance aircraft for their senior-year capstone project.

In the fall, he will head to Princeton University, where he will pursue aerospace engineering at the graduate level.

After the master’s program is completed, DeLuca will report to Marine Corps Base Quantico in Virginia for training as an infantry platoon commander.

Flight training in Pensacola, Fla., will follow after Quantico. 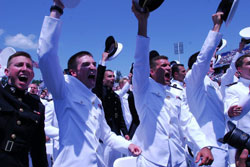 As for an aircraft assignment, DeLuca, who has about 90 hours in single-engine Cessnas, and favors fixed-wing aircraft for now—but “all platforms the Marines fly are pretty cool, and all are focused on supporting the guys on the ground.”

“I’ll be pretty happy flying anything,” he said.

Meanwhile, the academic hitch at Princeton may not be a completely flightless time. DeLuca enjoys giving airplane rides to friends, with most of his passengers experiencing light-airplane aviation for the first time in his care.

And after acquiring some soaring hours, and observing the taildragger tow aircraft in action, he has set his sights on earning a tailwheel endorsement.

Talarczyk, now living in Santa Fe, N.M., said in an email message that he sees DeLuca—who had applied to and been accepted by both the Air Force and Naval Academies—as the “ultimate role model” for future pilots.

Others seem to feel that way too. DeLuca said that he often fields queries from people about how to pursue the dream.

Thinking back on that first ride and wiggling the controls of a family friend’s Skyhawk, he tells advice-seekers that it all boils down to determination and focus. Don’t fall into the trap of stop-and-start, if you want the best results.