Get the app Get the app
AOPA Members DO more LEARN more SAVE more - Get MORE out of being a pilot - CLICK HERE
News & Media Resuming the Journey: Short- and soft-field takeoffs, Alaska style 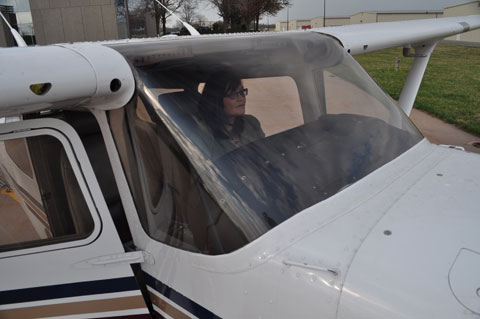 With the certainty that I could get the airplane safely back on the ground at typical airports in the Lower 48, my recurrency training moved on to other kinds of conditions: operating from the kinds of runways I’d likely face in Alaska—short or soft, or short and soft.

My flight instructor, Tom, lent me his FAA Airplane Flying Handbook, and I studied the chapters for short- and soft-field takeoffs and landings. On the day of the flight, the weather was clear with temperatures around 70 degrees Fahrenheit—a gorgeous spring day. The AWOS reported the wind from 290 degrees at 5 knots. As we left the ramp, I saw an airplane takeoff from Runway 23, and heard two more on the radio calling their positions in the pattern. I looked at Tom, surprised, and said, “23? Why aren’t we using 30?” Runway 23 is the longer and preferred runway at Frederick Municipal Airport, and as the airport was nontowered at the time (a new tower on the field was scheduled to open soon), pilots chose which runway to use. Apparently, five knots of wind was not enough of a breeze to warrant a change of runway for those three pilots. Although I could fly a pattern for Runway 30 if I wanted to, the safest choice was to join the flow of traffic—especially since we would be staying in the pattern. I chose safety and figured I’d deal with a crosswind should it pick up.

After the run-up, we taxied to the hold short line and waited for the airplane on final to land. Tom offered to demonstrate a short-field takeoff and I said “great.” We lined up as close to the end of the runway pavement as possible, put down 10 degrees of flaps, and with toes firmly on the brakes, applied full power—a feeling akin to holding back a five-year-old struggling to bolt after a departing ice-cream truck. We released the brakes, kept the airplane on the centerline, and powered down the runway. At best angle of climb, we rotated over the invisible 50-foot obstacle, easing up on the back pressure for best rate of climb about 100 feet. Up came the flaps, and when we reached pattern altitude, I flew the airplane around for a short-field landing. On final, Tom advised, “Now we want a firm landing—not a lot of float.” Roger that—we touched down firmly with full flaps and Tom nodded, “Good.” With the two other pilots sharing the pattern, and one or two helicopter pilots training adjacent to Runway 30, we didn’t brake and turn off, as we would have if the runway had, in fact, been short—but retracted the full flaps, lowered 10 degrees back in, rotated at best angle, and climbed out at best rate.

We made the next landing using a soft-field technique. Basically, we wanted the wings of the airplane—rather than the wheels—to hold the airplane’s weight for as long as possible, holding the nosewheel off the soft surface so it wouldn’t get bogged down. I carried a little power over the runway, pulled the throttle back for the touchdown, then nudged it back in a bit to keep forward momentum, holding the nose off as long as I could. For the touch and go, I added power, lifted the nose, pulled off the runway, and accelerated in ground effect until we reached takeoff speed and climbed out. Cool.

On the third or fourth trip around, we had a simulated emergency as Tom pulled the power on downwind. I brought her around with a no-flap landing that I was proud of. Double cool.

We did have a moment of angst on this flight. During one of the trips around the pattern, we heard someone call downwind for Runway 30. This caught my attention, as I had just turned downwind for Runway 23 and knew that could put us on a potential collision course. Tom and I didn’t see anyone, and decided it must have been one of the helicopter pilot’s routine announcements as he worked his maneuvers aside Runway 30. It wasn’t. As we flew abeam the numbers, a glance out the passenger window showed a Seneca a few hundred feet below us descending on final for Runway 30. I’m sure he never announced base or final. I shuddered, thinking of where our downwind legs could have intersected and the resulting tragedy. Tom commented that the soon-to-open tower would end that kind of conflict.

A few days after this lesson, I talked with Dwayne King, the Alaskan pilot who runs the summer bush pilot training camp for missionary aviators, where I’ll be in July. I told him about the short- and soft-field practice on our paved 5,200 foot runway. He laughed and said, “Great that you’re practicing that! You’ll be flying those techniques all the time at King Ranch Airport. The grass runway is 1,700 feet, but you want to land in the first 1,200 because the 500 feet of runway at the end is downhill at about a 15 percent grade. You’ll find brakes don’t work well on wet grass, downhill.” I gasped as soon as I learned about the 1,700-foot runway!

Right. I have a lot more practicing to do.

Kathy Dondzila is the manager of technical communications for AOPA’s Pilot Information Center. She has 300 hours total time and an instrument rating. After being an inactive pilot for nine years, she is working to get back in the left seat.