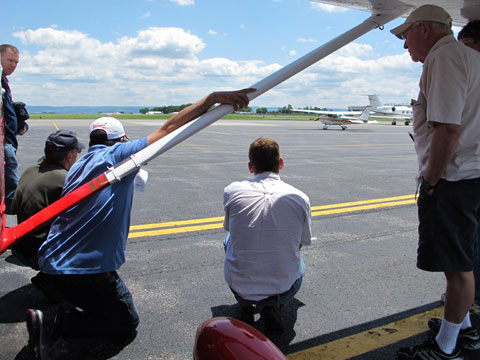 Organizer Gil Velez (in blue) demonstrates how the formation aircraft should be spaced, using aircraft on the ground.


With your eyes pinned to your lead aircraft, the pilot of which you met in the last few hours, you keep a distance of 120 to 150 feet inbound to what is soon to become the busiest airport in the world.

Dozens of aircraft arranged in elements of three make the flight to EAA AirVenture in formation each year through Cessnas 2 Oshkosh, a display of pride in type and the result of nationwide training. A group of pilots converged on Hagerstown Regional Airport in Maryland this June to prepare for the mass arrival.

“It’s the easiest way there is to fly into Oshkosh,” said Cessna 172 pilot Berry Gamblin on a bumpy ride north of the airport, adjusting the throttle to keep the R172K Hawk XP ahead of him as stationary as possible in his window. There are no complicated holds, no Ripon-to-Fisk procedures. Participants all get the same training, the same briefing—and then they follow the aircraft in front of them.

“Any pilot that is proficient can do this,” explained Gil Velez, one of the organizers of Cessnas 2 Oshkosh, who gave a lengthy presentation on procedures and safety before the group of six aircraft took to the sky in elements of two. But he emphasized the importance of taking the training and following established procedures. “Formation flying is a lot of fun, but it’s unforgiving,” he said at the start of the briefing. “If you make an error … that could be the last error you make.”

That’s why training is required for all participants—even those who have attended every year since the arrival’s 2006 start. The small training clinics give new formation pilots a chance to put their ground training into practice with a safety pilot on board, and annual participants an opportunity to get the rust off their formation flying skills before meeting the larger group at Dodge County Airport in Juneau, Wis., for the preflight briefing July 21.

Before heading out for a flight, Velez discussed everything from spacing and position in various stages of flight to communications, which has proven to be the most consistent issue with the mass arrival. Then it was time to put the lessons into practice. 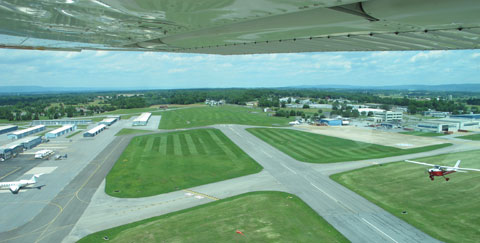 The aircraft departed Hagerstown Regional Airport to practice the principles pilots learned on the ground.


The smaller formation introduced the pilots to challenges they’d face in Wisconsin, as well as a few they might be lucky to avoid. The aircraft were paired with like models, but the difference in power and performance between the 160-hp Skyhawk and the 210-hp Hawk XP made keeping pace a challenge for the sprightly Hawk. As is often the case in the greater Washington, D.C., area, pilots were conscious of airspace: Bonanzas 2 Oshkosh, an organization that helped the Cessna group launch and sustain its arrivals, was holding a clinic at nearby Martinsburg Regional Airport, and a temporary flight restriction around Camp David was set to activate that afternoon, keeping pilots sandwiched between a radial and railroad tracks for clearance. Afternoon surface heating jostled the aircraft at 2,200 feet msl.

“We could have gotten up higher,” said Gamblin, the AOPA Airport Support Network volunteer for Virginia’s Leesburg Executive Airport and host of the Hagerstown clinic, rapidly pulling power as a thermal pushed the aircraft upward. “But part of the sport of it is the bumps.”

It’s a lot of preparation for a 20-minute flight, but the payoff is a sweet camping spot together in the North 40. Cessna 206 pilot James Andres has been flying the mass arrival with his family for seven years, and said he likes the family-oriented atmosphere of the North 40 camping area. After shutting down the airplane, “We have this huge front yard of nothing but grass to play in,” he said. And while the neighbors are always different, many of the participants in the arrival are the same from year to year. “It’s become a second family, you might say.”