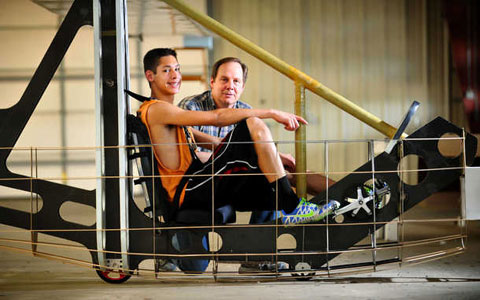 About 40 miles west of Fort Worth in the Texas town of Mineral Wells, a father and son are preparing to take places in the history of human power aviation.

Larry McNay is a Lockheed Martin Skunk Works engineer who ran beside the accelerating Gossamer Albatross, holding the wing steady, at age 16. A family friend, he had swept floors and later built parts for the team led by Paul MacCready that flew a translucent aircraft over the English Channel on the power of pedals pushed by pilot Bryan Allen in 1979.

Now, the Fort Worth Star-Telegram reports, McNay is preparing to strap his son, Andrew, 13, into the cockpit of Wind Rose. Virtually all composite, the new design by McNay was developed with help from Gossamer Albatross veteran Peter Lissaman, a Virginia bicycle shop, and enthusiastic supporters who have helped cover $50,000 in estimated expense.

More money will be needed to transport Wind Rose to the United Kingdom, where the 2012 Olympics and the Royal Aeronautical Society beckon. McNay told the Star-Telegram he hopes to demonstrate human-powered flight for consideration as an Olympic sport, and is also after cash prizes offered for achievements in human-powered flight. McNay may pursue one or both of a $77,610 reward for flying a marathon course, and roughly $155,221 (at current rates) for a human-powered aircraft “suited to athletic competition” and able to operate in “normal weather conditions, as encountered in the United Kingdom.”

McNay told the newspaper he is confident Wind Rose will fly.