Get the app Get the app
Already a member? Please login below for an enhanced experience. Not a member? Join today
News & Media No business like (air)show business 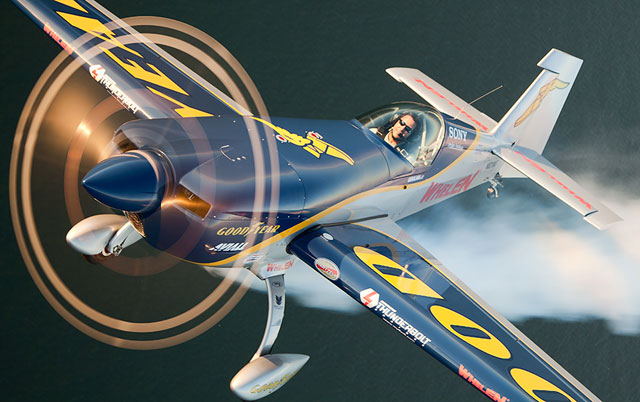 The Extra 330SC rocketed skyward in front of a crowd of thousands, music blaring.

“Reeaady, hit it!” a voice shouted—a nod to the Blue Angels—as the 350-horsepower aircraft lingered for a moment and tumbled end over end at the top of the climb. Then, the Extra plunged into a spiraling descent just as Bon Jovi’s “We weren’t born to follow” started blaring through the speakers, as if by maestro’s cue. The aircraft accelerated in the dive.

That’s a Michael Goulian performance. The aerobatic champion pointed out the moment while watching footage of the day’s routine in a post-flight debrief at the Rhode Island National Guard Open House and Air Show at Quonset State Airport in North Kingstown, R.I., June 17. Crew Chief Matt Chapman cues the music from the ground, anticipating the performer’s compensation for wind, altitude, and venue that make each routine just a little different. The crowd doesn’t notice if a song starts half a beat off, but, “If it’s right, everybody will notice,” Goulian said.

That commitment to precision has helped earn Goulian the airshow world’s three top honors: the International Council of Air Shows Sword of Excellence, Art Scholl Memorial Showmanship Award, and the Bill Barber Award for Showmanship. The Massachusetts native, who has been performing since 1989 (he first flew at the Quonset airshow in 1993), wows crowds with his aggressive style and crisp maneuvers, but he said safety is always paramount.

“The way to make it in the airshow business is to be super-professional for a long period of time,” Goulian said. “… You can’t do the impossible for very long.”

Goulian walks the routine before his performance.

As visitors streamed through the gates and lined up for coffee or a chance to try out flips on the Halo air jumper that morning, Goulian was thinking about the forecast 20-knot wind that would push him toward the crowd when he pulled vertical. He would have to start those maneuvers farther away to keep from busting the 500-foot separation mandated between performers and the crowd, he said. The performer also evaluated the fuel load he’d need to carry for his afternoon routine, in light of schedule changes in the morning pilot briefing: He’d have to wait for debris cleanup from pyrotechnics in the previous act. 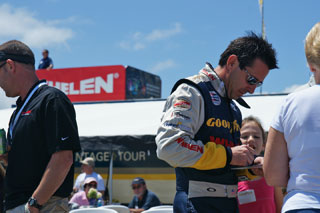 This focus on the upcoming routine results in what Goulian described as separate pre- and post-performance personas. He made the rounds greeting visitors at the Goodyear Aviation-supported VIP chalet in the morning, but disappeared for the hour before each performance and relied on his small Goulian Aerosports team to keep things running smoothly. After the second performance, he was all smiles and autographs.

The latter is as critical to the business’s success as Goulian’s adrenaline-pumping routines. The sponsors that support Goulian’s annual tours count on the team to provide potential customers with a positive airshow experience and facilitate personal connections; while Goulian prepped for his morning performance, Goodyear Aviation’s Marissa Zilch gave a presentation about the advantages of Goodyear tires to potential customers in a climate-controlled meeting room in the team’s modified NASCAR trailer. Goodyear Aviation and parts distributor Aviall are supporting nine of the team’s more than 20 events this year. 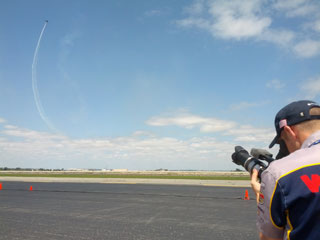 Media and Sponsor Relations Coordinator Chris Porter films the performance for a post-flight debrief. Porter also ferries the airplane from show to show. “That’s the big giant perk,” he says.

A big part of the airshow experience is getting to know the group that makes it all happen, said Goulian’s wife, Karin Goulian, the marketing and sponsorship director for Goulian Aerosports. While Goulian prepares for a performance and Chapman finishes a preflight inspection of the aircraft, Media and Sponsor Relations Coordinator and Ferry Pilot Chris Porter, Hospitality Coordinator and Team Driver Carl Paris, and Karin mingle with the guests. “When I imagine VIP hospitality for people, it’s all about meeting the team,” Karin explained.

It’s also about a great view of the action. The trailer, new to the team this year, offered guests the highest observation deck on the flight line, two stories above the ramp. Out on the pavement, attendees got a close-up view of the airplane between performances, and watched Goulian walk his routine just before climbing into the Extra.

High to the audience’s left, a burst of smoke signaled the start of Goulian’s second performance of the day. With less-than-forecast wind, he was able to fly a tighter routine, delivering crisp point rolls, spiraling descents, and thrilling verticals.

“He just loves it,” Karin said of the airshow business. “It’s in his blood.”

Michael Goulian is co-chairman of the AOPA Foundation’s Hat in the Ring Society.