Get the app Get the app
Already a member? Please login below for an enhanced experience. Not a member? Join today
News & Media Ohio Cub pilots were never really lost 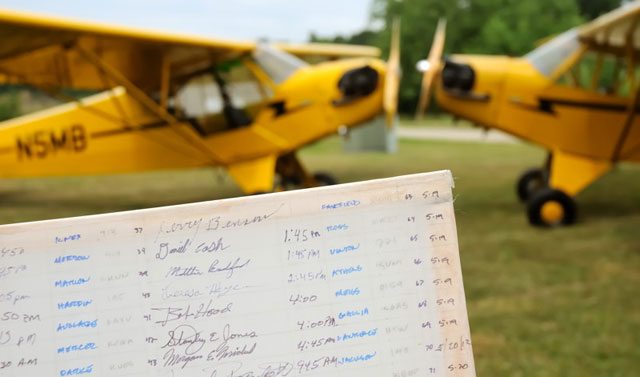 The flight log documenting stops at airports in 88 Ohio counties.

Two Ohio pilots have completed a journey that included landing in each of the state’s 88 counties—a trip they made in their 1946 Piper J-3 Cubs. The quest of Joe Murray, an assistant professor in the School of Journalism and Mass Communication at Kent State University, and retired physician Ron Siwik has been documented on a website, Lost in Oscar Hotel.

Murray, who plans to write a book about flying in Ohio, said he woke up one day last November and realized that he couldn’t do that without seeing as much of the state as possible from the air. After talking with his students, he thought the flight might inspire contributions to a scholarship. Murray’s students also helped to document portions of the flight.

Their plans coincided with the anniversary of the Piper Cub, which first flew 75 years ago. “I’d do this every year if I could,” Murray said after the two returned to their home field, Portage County Airport in Ravenna. “The weather made it really enjoyable.”

“It was like a high pressure system just parked over us,” Siwik added. The pair had only one weather delay during the trip. Siwik said he invited himself along on the trip about two or three months after Murray began planning for it, although adventures are nothing new to him—in 2008, he flew his Bonanza on a 24,604-mile solo flight around the world. Siwik also owns and regularly flies a Pitts S-1 and a helicopter in addition to his Cub and the Bonanza. 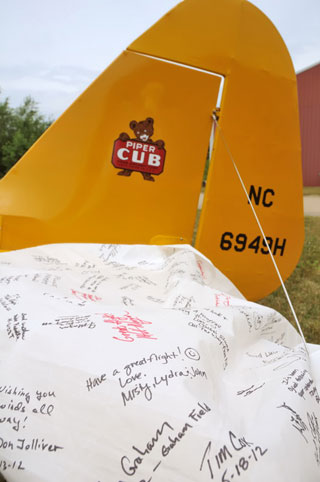 Aircraft fabric signed by well-wishers from airports across Ohio.

After nine days of flying, the pilots and their Cubs arrived at Dayton-Wright Brothers Airport on May 22 to an “amazing” reception, orchestrated by Wright B Flyer Inc. and FBO Commander-Aero. But their mission was not complete—the airport in Newark had been closed for a runway-resurfacing project, so they had not yet landed in Licking County.

Murray and Siwik had planned a journey of 1,670 miles that would take 26 hours of flight time, over about a two-week period. On their way back to Ravenna, however, they detoured back to Newark—the public airport was still closed, but they were able to land on a private airfield, Buckeye Airport in nearby Hebron. Including that detour, the trip ended up covering 1,809 miles over 36 hours and six minutes of flight time.

Of the 88 airports they visited, Murray said he had only been to “a handful,” while Siwik estimated that he’d been to about a third of them. Murray quipped that he got to the point that he wanted to land someplace that Siwik had never landed, or did not know anyone. “I tease him about that, but that’s one of the things about flying that I love,” Murray said. “Everybody’s connected.” And Murray got to meet the man who last overhauled the engine of his Cub. “He came out and said, ‘That’s one of my babies.’”

It’s hard for Murray to pick the most memorable moment of the trip. “I liked landing at [Neil] Armstrong [Airport], and I liked Checkpoint Charlie. But we had trouble contacting the owner for permission.” The private airfield in Lowell got its name from Air National Guard C-130 pilots who would call in as they passed over the strip. Finally, Siwik called the county sheriff, who provided a phone number for the son of owner Charlie Pickering. When Chip Pickering answered, he said he was at the airport and offered to mow the grass for their arrival.

“To me the most memorable thing was the constant welcome—the unrelenting enthusiasm at every stop,” Siwik noted. “It was obvious to everybody that this was the thing to do.”

Murray’s brother, Mike, managed their flight log and real-time flight tracking online. “I never imagined people would be watching it like television,” he said.

“I think the reason we had so much attention was the tracking,” Siwik added. “It gave people a lead time and a confirmation of the arrival.”

Murray said that at the end of the trip, his arm was sore—not from crosswind landings in the Cub, but from shaking so many hands at the airports they visited. “We’re going to be writing thank-yous for many months—people were so good to us,” he said.

Technical Editor
Mike Collins, AOPA technical editor and director of business development, died at age 59 on February 25, 2021. He was an integral part of the AOPA Media team for nearly 30 years, and held many key editorial roles at AOPA Pilot, Flight Training, and AOPA Online. He was a gifted writer, editor, photographer, audio storyteller, and videographer, and was an instrument-rated pilot and drone pilot.
Go to Mike Collins's Profile
Topics: Communication, Training and Safety, Takeoffs and Landings