Get the app Get the app
AOPA Members DO more LEARN more SAVE more - Get MORE out of being a pilot - CLICK HERE
News & Media Resuming the Journey: Wrapping up the flight review

Resuming the Journey: Wrapping up the flight review

Life happens—and in due time, death happens, too. Soon after lesson four, I lost my mother. She’d lived 93 years. Although her passing was not a surprise, as she’d been very ill, it still hurt to lose her and her absence leaves a hole, as a friend of mine put it. Between grappling with the pendulum swing of emotions and the workload of logistics involved in wrapping up her affairs, more than two months went by between lessons. As you might expect, the bit of shine on my re-polished flight skills had dulled considerably—and was especially noticeable on my landings. However, in lesson five we completed many tasks and maneuvers and wrapped up the thorough and very helpful five-lesson flight review, putting me back in the air after nearly a decade on the ground.

I got a good radio workout and had to rethink how I did things at my home airport as, during the two months I’d been away, the new tower at Frederick Municipal Airport had opened. As it happened, the controllers had quite a workout, too. It was the day of the G8 Summit at Camp David—a presidential retreat surrounded by P-40, an area of prohibited airspace that lies northwest of Frederick airport. A 30-nautical-mile-radius TFR was scheduled to impose restrictions on the affected airspace—which included Frederick—at 5 p.m. 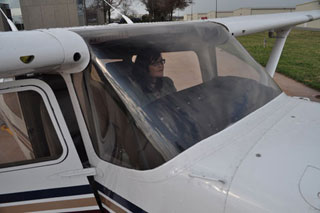 We did our preflight, called ground control around noon, and were directed to take off on Runway 5. My instructor, Tom, directed me to fly to a training area north of the airport. We talked about our proximity to P-40, and confirmed we had plenty of room to complete our maneuvers. I did some clearing turns to the left and to the right, and then pointed the nose north for stall recognition and recovery practice. Power-off and power-on stall practice was followed by engine-out procedures. I had my eye on a nice field below and circled to land. At 500 feet agl, Tom “fixed” the engine and we tuned the GPS to FDK and followed it back to the airport to do some pattern work.

We could hear another pilot on the ILS for Frederick, but we couldn’t see him. We were flying about the same heading as he was. We stayed above glideslope altitude until we were sure he was under us. Tower cleared us for a straight-in touch-and-go to Runway 23, making me rethink my pattern practice in a straight-in configuration. Tom correctly pointed out that I carried too much speed close to the runway, which put me over the numbers high and fast. That accounted for the first firm landing. We took off again, and flew a rectangular pattern, which was bigger than normal because of the tower’s delay in clearing us to base. More adjusting. We were actually never cleared to land, so we went around. Tower was busy clearing three military helicopters through the airspace over the upwind side of the airport, and as we added power to go around, instructed us to clear them visually. Tom kept an eye on them, saying, “Get the nose up—nose up—we need best rate of climb so we get above them.” After we were established on downwind, I grinned, thinking we’d likely climbed over a group of world leaders on their way to Camp David’s G8 Summit.

However, all that excitement did not help my next and final landing. Again, I was fast over the runway, trying to get the airplane down more quickly than it liked—and it complained with a thunk. Sigh. No greasers for me that day. But, definitely, I’m hopeful as I look ahead to flying in Alaska this summer. Looking forward to soft-field landings, short runways, no towers, and lots of adventure as I do some bush flying. Stay tuned—I’ll be posting articles from the Northland soon.

Kathy Dondzila is the manager of technical communications for AOPA’s Pilot Information Center. She has 300 hours total time and an instrument rating. After being an inactive pilot for nine years, she is working to get back in the left seat.