Get the app Get the app
AOPA Members DO more LEARN more SAVE more - Get MORE out of being a pilot - CLICK HERE
News & Media As wildfires rage, crews fight back by land and air

As wildfires rage, crews fight back by land and air

Air tankers and helicopters worked in concert with ground-based firefighters this June to combat a rash of wildfires throughout the West—one of them bearing down on Colorado’s second most populous city.

As of the morning of June 28, the Waldo Canyon Fire near Colorado Springs had grown to 18,500 acres and driven 32,000 people from their homes, according to InciWeb, an interagency incident information management system. White House Press Secretary Jay Carney reported June 27 that 79 helicopters were operating on wildfires around the United States, and 17 air tankers had cycled in and out of firefighting action over the previous 48 hours.

Military and civilian teams worked together to fight the Waldo Canyon blaze, which began June 23. Air Force C-130 tankers equipped with Modular Airborne Firefighting Systems owned by the U.S. Forest Service were activated at the request of the National Interagency Fire Center. The aerial firefighting system can discharge 3,000 gallons of water or fire retardant in less than five seconds, according to an Air Force media release; the aircraft descend to 150 feet agl to drop retardant ahead of projected burn areas, it added. 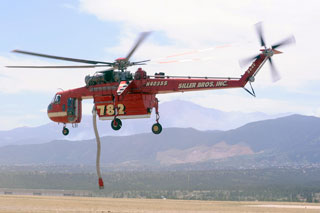 "Our number one goal is to take care of citizens in their time of need," said Brig. Gen. Kenneth Todorov, deputy director of operations for U.S. Northern Command based at Peterson Air Force Base, in the release. "We have eight tankers like these in the country, and half of them will be brought to bear on the fires here."

Officials with the 306th Flying Training Group at the Air Force Academy, which is also threatened by the fire, set up a command center to coordinate firefighting helicopter flights, the Air Force said. Officials with the U.S. Forest Service and Bureau of Land Management oversee their operations. Air Force officials emphasized that the aerial efforts were in support of firefighters on the ground.

Thunderstorms produced strong winds that thwarted containment efforts June 27, but winds had diminished by the morning of June 28. At 8 a.m., the Waldo Canyon Fire was 5 percent contained, according to InciWeb.

As the firefighting season continues throughout the country, one aircraft, the DC-10, is stepping up to drop massive amounts of water. Go behind the scenes of a drop in “ The New Rainmaker: Jumbo jet expands scale of aerial firefighting” in the May 2012 edition of AOPA Pilot.