An airplane’s influence on the course of people’s lives can be profound—and difficult to trace.

Seeing an airshow performance, getting a ride in a general aviation aircraft, or an initial flight lesson can shape lives and careers, sometimes many years after the initial events take place. But the AOPA 2012 Sweepstakes “Tougher Than a Tornado” Husky has made an indelible impression on at least one person, and its effect is both gratifying and inspiring to watch. 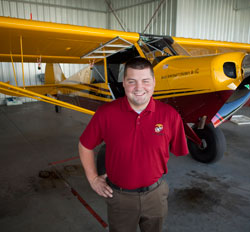 Adam Kisielewski and the Husky.

Adam Kisielewski first flew in the Tornado Husky on October 5, 2011, at AOPA headquarters in Frederick, Maryland. The flight was a try-out of sorts for Kisielewski, a former U.S. Marine sergeant who lost his left arm and right leg in Iraq during the vicious, house-to-house fight for the dusty crossroads town of Fallujah in 2005. He was being considered at the time for an Able Flight scholarship to cover the costs of sport pilot training, and it was a test for GA to see if it would appeal to a 28-year-old, married father who already was working full-time plus.

On a clear but breezy autumn day, Kisielewski met the Husky and climbed into the front seat.

Just getting in and out of a Husky—especially one that stands so tall on 29-inch Alaskan Bushwheel tundra tires—is a feat. But Kisielewski was able to get in and strap in to the five-point seatbelt harness without assistance. In fact, like so many wounded combat veterans, Kisielewski recoils at the idea of receiving extra help and makes it clear that, if he needs assistance, he’ll ask for it.

Kisielewski’s missing left arm is obvious; the amputation is so close to the shoulder that he can’t wear a prosthetic. But he walks so smoothly that it’s easy to forget his right leg is gone below the knee. He can put his feet on the rudder/brake pedals but he has no sensation in the prosthetic right foot and can’t articulate that ankle. 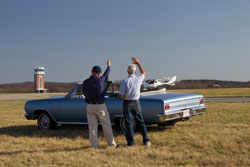 I got in the Tornado Husky’s backseat and we taxied to Runway 30, took off, and as soon as we were airborne, Kisielewski took over. Even though it was his first time flying a GA airplane, he was able to climb to a predetermined altitude and level off, and he showed no hesitation at maneuvering the airplane on a choppy day. Best of all, his situational awareness was excellent as he picked out geographical landmarks that guided the rest of our flight. He even spotted his house, with the American flag on a pole in front, and circled it in the airplane.

It was obvious that Kisielewski was relaxed and happy in the air, and that he would make an excellent GA pilot. Even better, he had the character to make a huge contribution to the flying community.

After 15 hours of dual instruction in a Flight Design CTLS, Kisielewski made an initial solo flight at Frederick Municipal Airport. The German-designed Light Sport aircraft has a hand brake but is otherwise unmodified. Kisielewski flew it smoothly and decisively, and stall recoveries and go-arounds are quick and fluid as he alternates between holding the control stick in his right hand and squeezing it between his knees as he operates the center-mounted throttle. 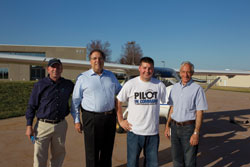 Stickell, a Vietnam War veteran and former F–16 test pilot, says teaching Kisielewski to fly has been a “pure joy.”

“I explain each maneuver and demonstrate it,” Stickell said, “and Adam just finds his own way to get it done.”

Instead of using paper VFR charts, which can be nearly impossible to fold and unfold in a confined cockpit with one arm, Kisielewski uses an iPad strapped to his knee. He also loaded the aircraft checklists on the tablet computer.

On April 19, Kisielwski took his Sport Pilot checkride at Northampton Airport (7B2) in Massachusetts with Tony Debany, an FAA designated pilot examiner.

“He easily met the FAA standards and did a beautiful job on the ground as well as in the air,” Debany said. “The best part is that he has the demeanor of a pilot in command. He takes charge in the airplane and he’s not afraid.”

Kisielewski credits the Tornado Husky for starting what he hopes can be a lifelong pursuit. “That first flight confirmed for me that flying is a blast, and that I could be successful at it,” he said. “Until then, I had no way of knowing.”