Get the app Get the app
AOPA will be closed July 4th, in observance of the Independence Day holiday. We will reopen at 8:30 am ET on Tuesday, July 5.
News & Media Never Again

I was a freshly minted private pilot, and I was nearing that ego-boosting 100-hour mark. I was itching for a "real" mission--a long and exciting cross-country flight.

I was a freshly minted private pilot, and I was nearing that ego-boosting 100-hour mark. I was itching for a “real” mission—a long and exciting cross-country flight.

Listen to this month's "Never Again" story: The 100-hour itch. Download the mp3 file or download the iTunes podcast.

I decided to fly three friends from Winnipeg to London, Ontario, for an international youth conference. It would be more than 25 hours round trip and would require complex cross-country planning, cross-border, and busy airspace. My Piper Arrow was the perfect machine for the mission.

After three exciting days at the conference, we headed back. We cleared Customs at the busy Chicago Midway International Airport, and as we took off for the next leg to Minneapolis-St. Paul, I knew something magical was going to happen—I would reach 100 hours. We landed at Minneapolis midafternoon. After refueling, I checked the weather and the FSS informed me that though my route of flight looked to be VFR, a low pressure system was hanging over the Great Lakes and we could expect some weather moving westward over our route of flight.

I had a decision to make. The weather along the route was VFR and I would have enough fuel to divert or go indirect to Winnipeg. I debated with myself, but not for long. We all had to be at work the next day. We were on a budget and staying at a hotel would blow it. 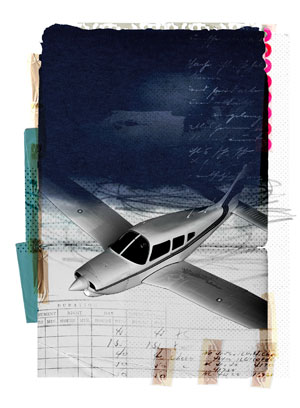 I filed for 6,500 feet agl all the way to Winnipeg. As we headed northwest, I started noticing the lowering clouds getting uncomfortably close. I descended to 4,500 feet, then to 3,000. The farther we flew, the more weather we encountered weather. I could see precipitation to the east and northeast of our flight path. Soon, the sky over us was getting darker, and the weather was closing in. I was getting uncomfortable, but still hoping to make it through. Then we started to encounter some showers followed by turbulence. My passengers were silent. I was talking to the Minneapolis controller and informed him that I needed to descend lower to stay out of the clouds.

I was now at 2,000 feet and the weather was all over me. We were bouncing everywhere. I no longer knew exactly where we were. The farther we progressed north, the worse it got. I diverted west, then south, only to find that it was as bad or worse. I contacted the Minneapolis controller. No response!

My passengers were beginning to panic. We were now about at 1,000 feet agl, flying in all directions to dodge the weather. I felt alone and helpless.

Suddenly I heard a voice on my radio: “Canadian Piper Aircraft, this is Federal Express cargo at 17,000, can you hear me?”

“I hear you loud and clear, do not panic. Just fly the aircraft. Minneapolis Center is trying to contact you, but they cannot hear you and I am assuming neither can you. I will work with them to help vector you to an airport nearby. Just stay calm and stay with me.”

He asked for my altitude and talked me through to Brainerd Lakes Regional Airport. Visibility was extremely poor. The airport manager flashed the approach lights, which could only be spotted less than two miles from the airport.

I can’t describe the joy of that touchdown. The airport manager helped us book a local motel and drove us there. When we got to the room, there was silence for some time. Everyone knew we were lucky to be alive. By the time we landed, I had just about 101 hours of flying time under my belt.

The next morning, we woke up to a magnificently clear day. We headed to the airport and I did a quick preflight, checked the weather, and took off toward Winnipeg. One hour into the flight, I noticed the autopilot beginning to malfunction, followed by other avionics. What was happening? I did a full check and noticed that the ammeter was not charging and we had lost almost all electrical power. I turned off all nonessentials. I was fewer than 60 nm from Winnipeg. I was familiar with the airport and it usually is not a busy place, so I decided to proceed to Winnipeg and plan a NORDO landing. I lowered the landing gear manually, landed, and taxied to the FBO.

I went to my office and began to contemplate the events of the previous 24 hours. Why did I so badly fail this mission? When I took off from Minneapolis, I had doubts about the weather. I did not fully understand what the system was doing, and I could not confidently envision myself completing the flight successfully and safely. Had it not been for many professionals who came together to save us, we would not have made it. I allowed that to happen in the second flight, making assumptions that since the weather was no longer a factor, all else would be fine.

It took me more than 25 years to muster up the courage to share this story. The greatest motivation for me is my son’s completion of his Canadian recreational license at age 16. He has around 65 hours and soon will be shooting for that 100-hour mark.