Get the app Get the app
AOPA Members DO more LEARN more SAVE more - Get MORE out of being a pilot - CLICK HERE
News & Media Pilots:

Stuart Powell's first job was as a part-time line boy at Goodall Field, just south of Danville, Kentucky, where he took flying lessons in the afternoons and would occasionally taxi a Piper J¿3 Cub around the field on the evenings when the manager left him to close. He got a little faster each night and would sometimes get airborne, chopping the throttle before the tires of the perky yellow Cub got too far above the grass. 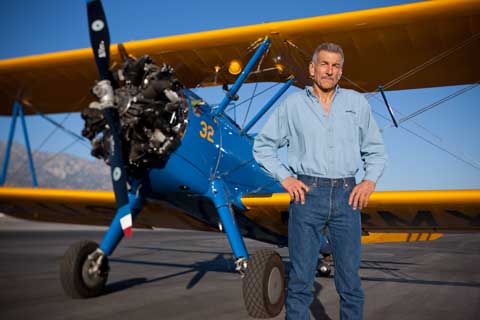 When he was a little boy growing up in San Gabriel, California, John Maglica, 57, loved to look skyward, hoping to see airplanes. For him, the sky was a wilderness and an adventure, and he dreamed of becoming a pilot to explore it. The oldest son of Maglite flashlight founder Anthony Maglica, John—“Mag” to his friends—could have gone to work in the family business, but instead, he pursued a career in aviation and law enforcement.

Maglica earned his fixed-wing private pilot certificate in 1983 and joined the City of Ontario (California) Police Department in 1984 with a desire to move to the aviation division. In preparation for his dream job, he trained in helicopters on his own time. “I was always working toward my goal,” said Maglica. An aviation slot became available 1996 and he started flying an MD 500E helicopter for the department. “I was finally doing what I wanted,” he says.

Unfortunately, his life took a dramatic turn for the worse in 2002. “The helicopter had just come out of maintenance, and my mechanic and I were doing a test flight. During the take-off phase, we experienced a catastrophic engine failure, resulting in a hard touchdown,” said Maglica. Both Maglica and the mechanic were seriously injured in the accident. Both recovered, but because of his injury, Maglica could not continue flying for the department.

While the accident changed his life, it did not change his love of aviation. Now working in research and development at Maglite, he owns and flies a 1941 Stearman. Impeccably restored, it was in pristine condition when he acquired it in 2005. The Stearman was released from service in 1944, and then sold to the Greek Air Force. It didn’t come back to the United States until 1979. Maglica is also an armchair historian of World War II aviation, specifically the Pacific Theater, and has of one the best private libraries of that era.

He has another dream percolating—owning a Grumman F4F Wildcat, a famous Navy fighter of that war. “One of the reasons I bought the Stearman was to prepare for the day I would fly a Wildcat,” he said. “That’s my goal, and I know it will come true, if I work hard and never give up my dream.”