Get the app Get the app
AOPA Members DO more LEARN more SAVE more - Get MORE out of being a pilot - CLICK HERE
News & Media Report compares glass, analog panel safety

Editor’s note: “The Accident Record of Technologically Advanced Aircraft” has been removed; a time has not yet been set for republishing the report.

Proliferation of glass panel cockpits in general aviation aircraft has not had a dramatic impact on safety, according to new research by the Air Safety Institute.

While glass panels may have advantages that cannot be documented—for example, there is no way to know how many pilots may have used them to successfully escape VFR flight into instrument meteorological conditions—an analysis of accident data from 2001 to 2010 suggests that most accidents still occur in visual meteorological conditions during daylight hours, when improved situational awareness is needed least. Quickly and accurately interpreting glass panels in the traffic pattern may also pose a challenge to pilots.

The Air Safety Institute has just completed an analysis —the most comprehensive to date—of accident data for several models of aircraft. Analysts seeking to compare the safety record of glass with analog panels faced many challenges: Glass panels are more common in newer models, and data on actual flight hours flown by specific models is not available, requiring a different measure of time in service (rate per thousand aircraft years) than is used in reported accident rates. No data is available on aircraft manufactured with analog gauges and later converted to glass, though such configuration changes likely account for only a small portion of the total fleet. Glass panels were introduced first in higher-performance aircraft that are typically used for business and personal travel, and have since become standard in virtually all production aircraft. More recent designs, such as the Cirrus SR22, transitioned very quickly to glass panels. Very few new aircraft of any type are delivered with analog gauges.

The accident rate in lower-powered aircraft, with or without glass panels, is higher, but the accidents are less likely to be fatal.

“What you have on the panel doesn’t matter nearly as much as what you’re flying and how you’re flying it,” said Air Safety Institute Manager of Aviation Safety Analysis David Jack Kenny.

The Accident Record of Technologically Advanced Aircraft special report tracked more than 20,000 certified piston aircraft manufactured from 1996 to 2010, a total fleet that includes roughly equal proportions of glass and analog gauges. The most dramatic differences in the accident record were found between three distinct groups: single-engine fixed-gear models with less than 200 horsepower had the highest accident rates but lowest fatality rates; complex or high-performance models certificated prior to 1980 had a lower accident rate, but the rate of fatal accidents was nearly identical. The accident rate for newer designs (models certificated after 1988) with 200 horsepower or more was more than 20 percent higher than comparable legacy models, and the fatal accident rate in newer, high-performance models was more than 60 percent higher. These aircraft likely spend comparatively more time flying at night, and/or in IMC.

Overall, glass cockpit displays had a “negligible” effect on the accident patterns among similar aircraft, though data suggests they set themselves apart in the traffic pattern.

The difference is smallest among the low-power models, and the reason for it remains unclear. One possibility is that analog gauges can be more easily interpreted during rapid changes in airspeed and altitude. Pilots with glass panels may also be “spending more time staring at the displays instead of looking outside,” Kenny said.

On the other hand, glass panels may have advantages when it comes to terrain avoidance, and avoiding VFR flight into IMC, but “the numbers are small enough to leave doubt about whether this is a real effect,” Kenny explained.

“Don’t count on machinery to save you from bad judgment,” Kenny said.

Pilots who fly in technologically advanced cockpits should learn them thoroughly, and the lack of standardization and model-specific training remains an obstacle. In the days before glass, instrument interpretation skills learned in one aircraft transferred easily to another; there are many variations among glass panel displays. Pilots should take time—preferably on the ground—to master the systems. 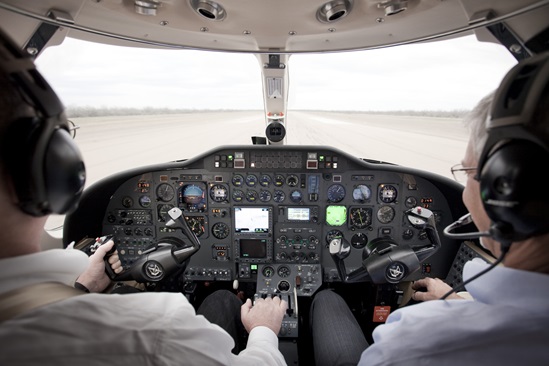