Get the app Get the app
AOPA will be closed July 4th, in observance of the Independence Day holiday. We will reopen at 8:30 am ET on Tuesday, July 5.
News & Media Technique: Keeping current

Several different ways of starting this article come to mind. For example, "The IPC—can't live with it, can't live without it." The instrument proficiency check is a flight check by an instrument instructor, much like a checkride, that either demonstrates your ability to fly on instruments, or shows your deficiencies and leads to more training.

An instrument pilot checks his logbook and discovers that he no longer can act as pilot in command under IFR because his recent experience prescribed for instrument currency is out of date. What must he do?

Rumors to the contrary aside, the answer is the same now as it was before the FAA made a recent technical clarification to several portions of FAR 61.57. Simply stated, if the pilot’s currency lapsed, but did so less than six calendar months ago, the pilot may reestablish currency without taking an instrument proficiency check.

If currency expired more than six months ago, it’s time to set up an instrument proficiency check. In either case, once currency is regained, the pilot has until six months past the next expiration of currency to reestablish it without an IPC. If the pilot is unable to maintain currency—and is also unable to regain it within six months after it lapses—it is time for another IPC.

All that is just as it was before.

Sometimes a timeline beats a narrative for explaining a complicated rule—and when it comes to instrument pilots and their currency requirements, understanding how to regain currency in the six months after it has lapsed, and how to do so thereafter, has always been confusing.

“AOPA has studied the recent amendment, has spoken with the FAA—and consulted with aviation attorneys for good measure—and verified that no change to the procedures for maintaining or reestablishing instrument currency has been made,” said Kristine Hartzell, AOPA manager of regulatory affairs.

Despite concerns expressed by some pilots, the clarification did not change the long-standing procedures that instrument pilots must use to regain currency, she said. 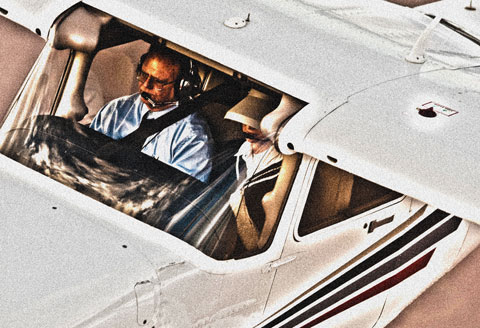 Several different ways of starting this article come to mind. For example, "The IPC—can't live with it, can't live without it." The instrument proficiency check is a flight check by an instrument instructor, much like a checkride, that either demonstrates your ability to fly on instruments, or shows your deficiencies and leads to more training. It is required whenever an instrument pilot fails not only to meet the minimum requirements of six approaches in six months—including a holding pattern, interception of a course, and tracking—but also continues to fail to meet that requirement for an additional six months. After that, you can’t get current on your own, and you can’t act as pilot in command in instrument weather. You need to visit an instrument flight instructor.

If you are amused by this, you are probably flying for a passenger or freight airline, corporate jet owner, or use an airplane in your personal business. Even general aviation pilots flying larger aircraft who keep current must retrain yearly if they want the lowest premium on their aircraft insurance policy.

Flight instructor Sandy Geer of Frederick, Maryland, is concerned that many pilots can prove during an IPC that they meet minimum standards, but may not be proficient—that is, at the top of their instrument game.

When someone comes into his office for currency training, he lets the pilot know the first flight will be an evaluation to see what is needed to make him or her proficient. Some customers walk out. The problem is found most often among older pilots who remember achieving high levels of proficiency in the past, but wildly underestimate how quickly instrument skills deteriorate.

Older pilots who remember achieving high levels of proficiency in the past wildly underestimate how quickly instrument skills deteriorate.

Even airline pilots will tell you that they feel rusty if they have been away for a couple of weeks. Couple of weeks? In my case, I had seven approaches in 12 months, including five the month before I took the IPC—but practically speaking, I had been away from instrument flying for a year.

That’s why Bill Inglis and his wife, Diane, offer a two-day instrument proficiency course in a simulator at Legacy Flight Training in Vero Beach, Florida. He had been the manager of the SimCom training center near Piper Aircraft when SimCom moved the Piper training to Orlando. He also was assistant chief instructor at Pan Am Academy in Florida. His Redbird simulator isn’t approved to actually sign off an IPC, so mostly he flies with owners in their own Piper aircraft. His course is in addition to initial and recurrent training given to new and current Piper aircraft owners.

The two-day format allows a relaxed atmosphere in which to improve proficiency. Each day includes four hours in the classroom and three in the simulator or the customer’s aircraft. You’ll review everything from standard departures and arrivals to the DME arc approach. The biggest problem he has seen among clients is holding. Air traffic controllers simply don’t ask pilots to hold very often—an improvement in the system that keeps pilots from staying proficient.

Since Inglis works most often with aircraft owners, you’ll need to bring your own aircraft. If you are a renter, the two-day course is still a great way to keep current on regulations and procedures, even if you can’t be signed off for the IPC.

Instructor Gary Smith of Frederick, Maryland, has an answer to the holding problem. He was the instructor who gave me the IPC. But before taking Smith’s IPC, I decided to take Geer’s advice and looked at a document for flight instructors conducting the IPC issued by the FAA five years ago called Instrument Proficiency Check Guidance. You’ll find it online. It lists what you might find on your next IPC. In that document, there is a suggestion to take an FAA preparation course, which I did, called, “ Instrument Proficiency Check Review Guide”.

Doing so gave me a head start on the IPC, and a way to butter up the instructor. Instructors appreciate customers who make an effort to prepare. I also had a list of acronyms from another instructor to help with my review. For example, an approach briefing might be recalled by A MICE ATM (ATIS, marker beacon, identify navigation aids, course set, entry type, altitudes, timing, missed approach).

Now then, how are you going to remember holding entries? Smith suggests you do it by the process of elimination. You know which side of a hold is the protected side, right? That is the same side of the inbound course as the holding racetrack.

This works best when the holding pattern is published and appears on the chart. If you are approaching the hold from the protected side, then your only two choices are a direct entry or a parallel entry. Protected equals parallel (plus direct). If you are approaching from the nonprotected side, you have only two choices left—a direct or teardrop entry.

Updates to glass-cockpit software usually go to the owner of the aircraft, and that may not be the flight school where you rent. It is up to the owner to make sure the avionics system software is current, as well as the database. You’ll need to check the software version to make sure.

Also, the school may have glass-cockpit systems from different manufacturers, meaning you need to learn different systems. Even if they are different models from the same manufacturer, renters may find themselves reviewing, for example, both a Garmin 530/430 and G1000 system, or maybe there is a Garmin G600 thrown into the mix.

Then there is the matter of buttonology. Did you load the approach and later think you had activated it, only to discover it wasn’t active? (I did exactly that on my IPC.) Do you find your course deviation indicator to be in the wrong mode? How quickly can you reach the page on the multifunction display to check your second GPS?

Practice breeds familiarity and in this case, familiarity is a good thing. Practice as much as your budget allows and recoup your investment when the weather turns sour.