Get the app Get the app
AOPA Members DO more LEARN more SAVE more - Get MORE out of being a pilot - CLICK HERE
News & Media Wx Watch: The whys of wind

Wx Watch: The whys of wind

Facing fear of the windsock

The airport is quiet. No taxiing, no runups, no one in the pattern, no one on the radio. And the weather is good VFR. What's going on? Chances are, a look at the windsock will give the answer.

So you don’t buy the 5,000-foot predictor of surface winds? Want to know how fast any thermal updrafts will be? Or wonder where updraft heights will peak? If wind behavior near the surface gets your juices flowing, check out the BLIPmap UniViewer online.

This site is a favorite with sailplane pilots because it deals so heavily in boundary-layer dynamics—especially things like cloud bases, wind speeds, and updraft velocities. But this same information helps all pilots understand surface winds better. Yes, you have to register to use this interactive site, but it's free. You can click on a number of regions within the United States, then zoom in or pan around a spot that interests you. For the serious weather geek, you can even click on a location to get a pop-up of the nearest Skew-T/log P plots. 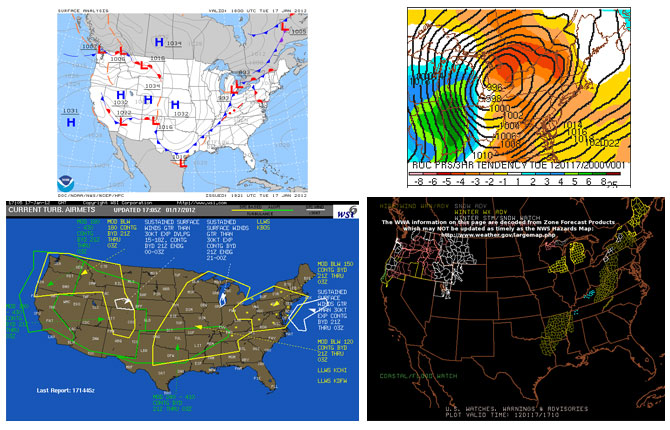 Wind activity on January 17, 2012, as analyzed by several sources. The surface analysis chart (top left) shows a strong cold front moving through the Ohio Valley, with a squall line in southern Ohio/central Kentucky. A three-hour pressure tendency chart (top right) indicates just how fast pressure is falling ahead of the cold front, and rising behind it. As you might guess, airmets for strong surface winds (above left) are parked the length of the front. And high-wind advisories (above right) are in effect as the front moves east.

The airport is quiet. No taxiing, no runups, no one in the pattern, no one on the radio. And the weather is good VFR.

What's going on? Chances are, a look at the windsock will give the answer. Sure enough, it’s sticking straight out and switching direction rapidly with strong, gusty winds. These kinds of winds are the bane of the experienced and the neophyte pilot alike, because they can mean a lot of work during takeoffs and landings—and promise huge servings of turbulence. There are risks, too. Just ask insurance companies.

That time of year

We’re conditioned to think of March as the windiest time of year, but that’s an overgeneralization. Strong surface winds happen at all times of year, for any number of reasons. But, yes, the onset of spring means that bigger, warmer air masses begin to creep northward, chasing winter’s cold back to Canada.

What does this have to do with rowdy surface winds? It helps to understand that wind is a direct result of temperature differences. No matter the time of year or your location, if there’s a zone where colder and warmer air masses come together, you’ve got wind.

Let’s imagine the air mass in the warm sector of a classic frontal complex, and then compare it to the colder air in an air mass advancing from the west as the leading edge of a cold front. Where the warm air lives, air molecules are farther apart, the air is less dense, and so the warm layer is relatively “thick” in a vertical sense. Meanwhile, in a cold air mass, the air is denser and therefore less thick.

How thick is thick? You can check this out on constant pressure charts. That’s where you can see the heights of various surfaces of similar pressure. For example, if you were to draw a line on an 850-millibar (this corresponds to approximately 5,000 feet msl) chart from a warm sector, across a cold front, and into the cold air behind the front you might see the thicknesses of that pressure surface can range from 1,500 meters in the warm air to, say, 1,200 meters behind the front. What we’re looking at are the height variations of a pressure surface aloft—generated by a temperature gradient.

Closely spaced isobars on surface analysis charts give a great idea of just how comparatively strong surface winds may be. The tighter the gradient between isobars, the stronger the wind. But there are some other charts that can help visualize the situation. Pressure tendency charts indicate how much the surface pressure has changed over the past three hours. Streamline analysis charts let us see how, and where, wind directions change. This can all be helpful when scouting out airports with runways more favorably aligned into the wind.

Of course, a check of METARs and TAFs for mention of strong surface winds is also in order. So is a look at airmets for turbulence (or mention of LLWS, or low-level wind shear), and area forecasts, to see if the infamous “WIND” (this means sustained surface winds or gusts of 20 knots or more) notation is posted. Typically, this warning appears in anticipation of the rowdy surface winds that so often follow a cold frontal passage.

Ever notice how a nice VFR day may dawn with little or no surface wind, but by midday winds sometimes reach a not-so-nice, gale level? (Definition: winds of 28 to 47 knots.) Then, as the sun sets, the winds magically die down. This behavior is a function of the mixing of air in the lowest levels of the atmosphere.

At night, the winds aloft continue moving at their usual pace. But without any surface heating from the sun, surface winds drop off because there are no rising air parcels. But by late morning, the surface heats up a bit, which allows this warmer air to reach the 3,000- to 5,000-foot-agl level. This, plus the turbulence created at the boundary between the faster-moving winds aloft and the calmer surface winds, creates eddies that mix the winds aloft and send them downwards. The result? Winds pick up during the day.

For a few days after a cold frontal passage, or on days when a large high pressure system prevails, you can generally rely on a rule of thumb to predict the peak strength of surface winds. It’s a simple rule, based on the air-mixing phenomenon. Just look at the winds aloft at 3,000 to 5,000 feet agl. By midmorning those winds will mix down to the surface. So if the winds aloft are 30 knots, by 11 a.m. they’ll be at ground level. At day’s end, those winds aloft will “decouple” from the quieter air nearer the surface and the pattern will become a tamer place.

So much for theory. Remember the tried-and-true piloting skills necessary for landing and taking off in nasty surface winds? Here’s a quick review of a few: