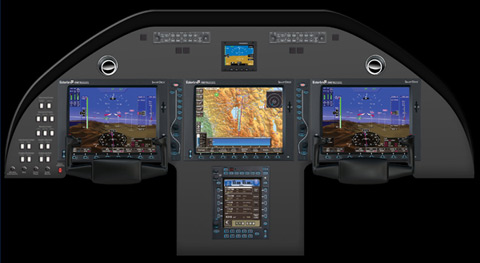 Esterline CMC Electronics, which purchased SmartDeck from L-3 in 2010, plans to aim for the high end of the turboprop market. The glass panel system is now being adapted for the Evektor EV-55 Outback.

The SmartDeck panel, developed to compete with Garmin glass but long on the outside looking in, has now found a home: matched with a brand-new entry in the twin turboprop market from the Czech Republic.

The Outback, powered by a pair of Pratt & Whitney PT6A-21 turboprop engines (536 shaft horsepower each), is, like the glass panel it will now sport, taking dead aim at industry giants.

With an expected sale price of $2.1 to $2.2 million, a 4,021-pound payload, and a landing distance of 1,673 feet over a 50-foot obstacle (international standard atmosphere, maximum landing weight), Evektor hopes the new twin will be ready for delivery in late 2014 or early 2015.

Evektor launched the design effort with a “clean sheet,” guided by market research that told the company there is an aging fleet of thousands of utility aircraft that will require replacement in the coming few years.

“If you look at something like the Cessna Caravan, then the EV-55 is a much better aircraft in terms of performance, in terms of load carrying,” Milne said. “We think we’ve got a pretty impressive utility aircraft.” 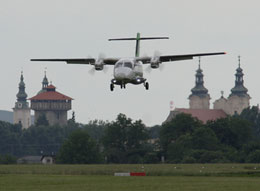 The EV-55 first flew in June 2011. Evektor chose the SmartDeck panel based on a combination of capability and cost, according to Petr Grebenicek, Evektor’s marketing manager for the EV-55 project.

“SmartDeck is very innovative, and it has all capabilities we need,” Grebenicek said. “CMC offered us very competitive price and support for this.”

The SmartDeck will be customized for installation in the Outback, and CMC has developed new features including synthetic vision. SmartDeck already integrates with autopilot systems, and WSI datalink weather. CMC is now developing airborne weather radar integration capability, according to Greg Plantz, director of SmartDeck marketing and sales for Esterline CMC.

The original equipment manufacturer (OEM) agreement with Evektor is a first for SmartDeck. Plantz said the company will not seek to compete with Garmin for the full range of the retrofit market, targeting primarily the high-end turboprops.

“We are going to be selective,” Plantz said. “We don’t anticipate doing multiple (supplemental type certificates) for class one and two type of aircraft.”

Plantz said landing the deal with Evektor to outfit the Outback was a major coup.
“This is the type of platform that we were looking for,” Plantz said, adding the company strategy is focused on select retrofits and “OEM positions such as this.”

Milne and Grebenicek expect the EV-55 to see military service, and on the civilian side they hope it will take hold in the light cargo, passenger service (the EV-55 can seat nine), and utility service.

“The big thing going for the aircraft is it’s already demonstrated it’s got a good capability for rough field performance,” Milne said. “It’s a very flexible aircraft for anybody that’s looking to travel to remote type areas.”

The EV-55 will use pneumatic boots for ice protection, with full known-icing certification “a must,” Grebenicek said, for the market they seek to court around the world.

“There is a huge market for this airplane, especially in big countries,” Grebenicek said. 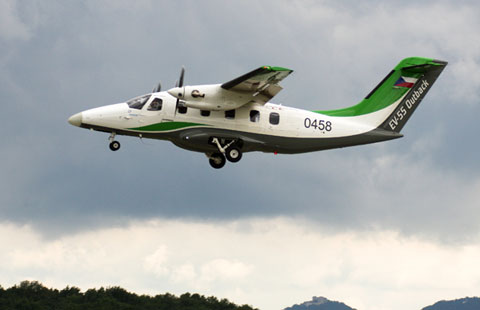 Evektor, the Czech Republic aircraft maker that has produced thousands of light sport aircraft, is taking aim at the twin turboprop utility market with the brand-new EV-55 Outback that will be equipped with a SmartDeck panel.