Get the app Get the app
Already a member? Please login below for an enhanced experience. Not a member? Join today
News & Media Man vs. mountain

Editor's note: This article was updated December 6, 2019, with current links to Whistler Heli-Skiing. 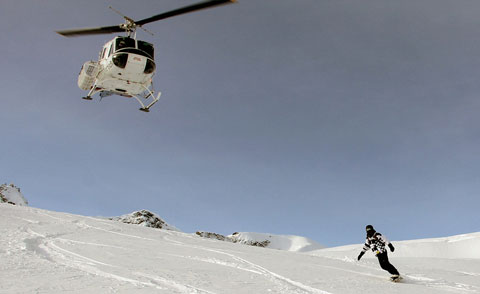 You’ll know when the avalanche probe lands on a person: That spongy, soft feeling is like nothing else on the mountain, ski guide Kirk Becker explains to four advanced skiers at the Whistler Municipal Heliport.

Becker has armed the skiers with transponders, probes, and shovels in case the powder gives way and they must search for a buried companion. They have about 10 minutes, he says, to search a grid, locate the fallen skier, and shovel him out to give him a 90-percent chance of survival.

It’s a standard briefing at British Columbia’s Whistler Heli-Skiing, and familiar to seasoned heli-skiers, but the thunder of avalanche charges earlier in the morning underscores the danger. Less than a week before this snowy late-February briefing, four people were killed in avalanches south of the border in Washington state while skiing and snowboarding in out-of-bounds areas. A skier who goes up against the mountain unprepared might not come down alive.

Today’s visitors traveled from across the country and from Europe to take on the challenges of pristine glaciers and remote glades of the Pacific Coast Mountain Range. The last 24 hours brought more than 40 centimeters of fresh snow, so if Blackcomb Aviation’s helicopters can deliver the skiers safely to a peak—and the guides’ early-morning assessment of avalanche conditions doesn’t steer them wrong—it may be worth the journey. Becker said earlier that if the group could fly up to the alpine it would be “good right-side-up skiing top to bottom.” But alpine winds, low visibility, or clouds could shutter the VFR operation and send them back to crowded lifts. At this point, it all depends on the Pacific coastal weather—and the decision of the pilot in command.

No, you don’t jump out of the helicopter.

The mental image of alpine paratroopers must be so widespread that Whistler Heli-Skiing addresses it in the Frequently Asked Questions of its website. “The helicopter lands at the tops of the heli-ski runs to allow all skiers to exit the helicopter, and to allow the guide to unload the skis, poles, and snowboards,” it explains.

The website seems designed to allay the concerns of intermediate skiers who fear they’ll falter on the ungroomed runs, and experts who dread waiting for the aforementioned heli-skiing novices. Have no fear: The company offers packages that range from intermediate to extreme. Capable skiers with no powder experience can pile 10 at a time into Blackcomb Aviation’s Bell 205, and smaller groups of experts can take the well-powered and quick Bell 407 farther afield for more challenging runs. The average run, according to Whistler Heli-Skiing, is about 2,000 vertical feet, but they vary from 1,400 to 5,000 feet. The runs average about 45 minutes to ski down a distance that took two or three minutes to fly up. 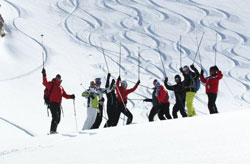 The combination of a Bell 205 and Bell 407 is suited to a large heli-skiing operator like Whistler Heli-Skiing, Blackcomb Aviation pilot and Whistler Base Manager Steve Gray said, but Blackcomb uses different helicopters for its other heli-skiing clients: Coast Range Heliskiing in nearby Pemberton delivers skiers to the peaks in Eurocopter AS350 AStar and Bell 407 helicopters, and Snowwater Heli-skiing’s small operation near Nelson is suited to the AStar.

The heli-skiing machines are just a few of Blackcomb’s extensive rotor fleet: The company also operates AS355 Twinstars, Bell 206 Jetrangers, and more for missions that range from long-line rescues to aerial filming. Geoff Doran, chief pilot of Blackcomb Aviation’s rotary division, said 24 full-time helicopter pilots fly for the company, which has bases around British Columbia, and others come in for seasonal or specialty work. Most arrive with 2,000 or 2,500 hours, he said, including extensive mountain-flying experience, human external transport system (HETS, also known as “long-line”) rescue work, and, preferably, heliskiing.

“We do very specific work, and we need guys to have a very specific skill set,” Doran said. “Some [applicants] have it, but in a flatland environment”—which doesn’t prepare them to understand the performance issues of flying in the mountains and the unforgiving nature of the environment, he added.

Why heli-ski? Whistler Heli-Skiing makes the case for its brand of mountain adventure in this promotional video.

Blackcomb Aviation often gets a call from the Royal Canadian Mounted Police when skiers, snowmobilers, or hikers discover the mountain’s unforgiving nature the hard way. In February a Blackcomb helicopter pulled two people out of Cake Hole, an area on the south side of Whistler Mountain: Skiers duck a rope to get to powder on the other side, Gray said, but there’s a reason the area is out of bounds.

“It’s really like a big lobster trap out there,” he said. People get lost, and that soft powder leads them right to the edge of a cliff. Fortunately, the dead-end run stops at an area with cell phone reception.

Doran said about eight pilots have the HETS qualification to pluck lost skiers or hikers off the mountain with a long line. Pilots take assignments based on the skill sets they have: An experienced pilot might bounce between search and rescue, avalanche control, medevac, fire fighting, filming, and heli-skiing, but someone newer to the operation may only be qualified for certain tasks. Only three fly for movies, he said—with big budgets and high expectations, movie pilots need to deliver. Doran estimated Blackcomb Aviation flies for movie shoots six to eight times a year; the company website lists such film credits as Fantastic Four, A-Team, and Hulk.

Operating machines loaded with skis, boards, and bodies, heli-skiing pilots deal with weight-and-balance and fuel management considerations as well as the challenges of weather. Visibility, heavy snowfall, icing, or high winds could compromise a flight. “The weather can get nasty fast,” Gray said.

“ There’s many days when it’s work, but there’s a lot of days when you almost laugh and think, ‘They’re paying me to do this?’

But on a good day, pilots and skiers alike are rewarded with breathtaking views and outdoor fun. Doran said heli-skiing operations are one of his favorite types of flying. “Fighting fires and heli-skiing—that would be a good year for me,” he said. With heli-skiing, the pilots get to take in the mountain views and spend time around people who are on vacation and enjoying themselves, he said. As seriously as the pilots and guides take safety considerations, at the end of the day this type of flying is just plain fun.

“There’s many days when it’s work, but there’s a lot of days when you almost laugh and think, ‘They’re paying me to do this?’” Doran said.

When you go heli-skiing you never know what will happen, avid skier Benny Caine of Montreal explains on the drive from Whistler Village to the heliport. “But one thing’s for sure—when you do go, something’s going to happen,” he says.

You might encounter pristine powder or less-forgiving wind-affected snow. Someone might wipe out on the first run and have to dig out his skis. And in the dozens of times he’s been heli-skiing since he started in 1992, Caine says later, he’s seen three avalanches—but no one has ever been buried, he adds.

“I do this because I don’t know what’s going to happen,” he says. “… Even if you go out to the same place, it looks different the next day.”

After heavy snowfall in the last 24 hours, Caine and the three other guests in the van with Becker hope to have the opportunity to discover what fresh snow the mountain has to offer. But the fickle coastal weather that allows Whistler Blackcomb resort to boast an average of 34.1 feet of snowfall per year on the summit may have its own plans: Becker estimates that Whistler Heli-Skiing only skied eight and a half days in January because of weather. By late February, they had only canceled four days that month, he adds, “but it has been a work month.”

The guides and pilots navigate the varied conditions with frequent weather checks, starting the evening before. If the forecast looks obviously bad—with icing, say, or high winds from the Pacific—they may call it off early, according to Gray, but most times they opt to wait until morning. 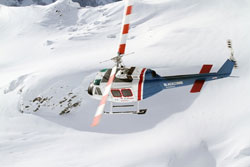 Each morning starts at 5:45 a.m., said Whistler Heli-Skiing General Manager Mike Sadan: Wake up, start looking at weather websites. (“When it’s dark, all you can look at is a computer.”) At 6:30 a.m., three guides discuss via telephone whether to green-light or cancel the day. Or, they can buy some time with a “yellow-light meeting.”

At 7:30 a.m., 20 guides and pilots pack into the maintenance building at the Whistler golf course. They have 15 minutes to make the call. Will the flying be safe? Will the skiing be fun? For ski guides, the go/no-go call goes far beyond the question of Class G weather minimums. They must picture a piece of terrain—a product to deliver—that people can get to and have a good time, Sadan said. A ceiling of 6,000 rules out the high alpine, but you can still fly a helicopter.

If the skiing is lousy below the treeline and visibility is poor above, they cancel the day, Sadan said. But on marginal days like the one that has Becker, Caine, and the others in limbo, they might opt to cancel the Bell 205 flights and send only expert skiers. The longer-range 407 “can poke around in more remote places,” Sadan said, and always has expert skiers aboard. Larger and less-skilled groups need wider spaces to ski the untracked runs they were promised, and their aircraft are more limited in range.

The effort to salvage a marginal day is understandable: On days they don’t fly, they can lose $100,000 from the revenue stream, Becker says. But employees at Whistler Heli-Skiing and Blackcomb Aviation agree that efforts in recent years have helped remove some of the pressure on pilots to fly. Sadan said that because Whistler Heli-Skiing is paying for the flying, it’s primarily the guides’ choice on whether to fly—but they always respect the pilot’s decision. “He’s the pilot in command at the end of the day,” he said.

Clouds obscured the mountaintops on the drive to the heliport, but Becker hopes they’ll lift in time for the 10 a.m. start. Just as he’s finishing the avalanche briefing, though, he gets a signal. Four expectant skiers wait in the snowy parking lot with their packs as he goes to the Whistler Heli-Skiing building to investigate.

No go. A Blackcomb Aviation 407 had gone out and picked up icing on the blades, Becker explains to the group. He’ll try to book them for a different day.

Thus heli-skiers taste the disappointment of a general aviation pilot. And like a pilot, Caine has a Plan B—he’ll head to Whistler Blackcomb for a day on the lifts. The others will try again tomorrow. Becker drives the group back to the resort along the Sea to Sky Highway, passing Crazy Canuck Drive. The pilots don’t often make a no-go call at 9:30 a.m., he says, but ski guides have enough experience on the slopes to respect the call.

“Ultimately it’s the pilot’s decision. … Everybody knows you don’t mess around,” he says. 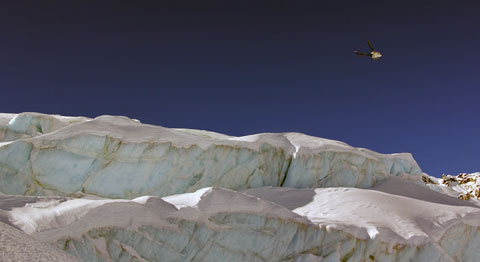