Get the app Get the app
AOPA will be closed July 4th, in observance of the Independence Day holiday. We will reopen at 8:30 am ET on Tuesday, July 5.
News & Media Baumgartner takes plunge from FL710 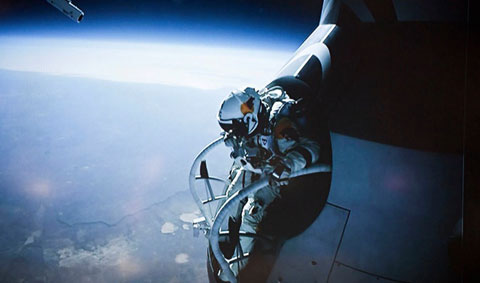 
At 71,580 feet msl, the air is so thin that liquids vaporize, and the temperature drops to minus 75 degrees Fahrenheit. From that height, Austrian daredevil Felix Baumgartner stepped out of the Red Bull Stratos Capsule March 15 over Roswell, N.M., and resisted temptation to pull the ripcord too soon.

"I wanted to open the parachute after descending for a while, but I noticed that I was still at an altitude of 50,000 feet," Baumgartner said in a news release from Red Bull. Temperature was an issue during this first manned test of the space capsule lifted by a helium balloon to the uppermost reaches of the atmosphere.

"I could hardly move my hands,” Baumgartner said. “We're going to have to do some work on that aspect."

Baumgartner accelerated to nearly 365 mph, and expects to break the sound barrier on an upcoming jump, wearing only a space suit. Red Bull Stratos plans to break the world freefall record with a jump from 120,000 feet. The March 15 test made the 42-year-old extreme athlete only the third person in history to survive a jump from that altitude.

The only other American to accomplish the feat, Joseph Kittinger, a living legend at 83 who jumped from 102,580 feet during an Air Force test in 1960, is a project mentor and led the ground team watching from mission control in Roswell.

Red Bull Stratos reported that this first foray above the “Armstrong line” to an altitude where Baumgartner’s life depended on his space suit went exactly as planned. From launch to landing, the test lasted one hour, 40 minutes.


Explosives broke the capsule free of the balloon following Bamgartner’s departure, and the capsule landed undamaged under a parachute.

"This test serves as the perfect motivation for the team for the next step," Baumgartner said in the news release.

The test had been postponed twice because of weather, and the next jump will have to wait for seasonal winds to pass. Baumgartner will make a leap from 90,000 feet before attempting to break the record