As evidenced by its continued presence in the AOPA Favorite Aircraft Challenge, the Beechcraft Bonanza is a legend in aviation, but even great airplanes have room for improvement and who better to uncover the opportunity than a Bonanza owner. 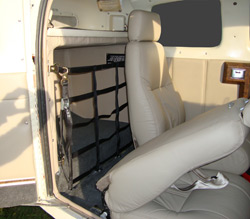 Thus began the odyssey of Jeff Simon, owner of a 1975 Bonanza A36. While lighter and arguably faster than newer A36s, those from the 1970s come up short in at least one way compared to those built starting in 1979—lack of an aft baggage compartment. Early A36s have a bulkhead right behind the aft seats. From 1979 and on, the model includes a baggage compartment extension into the tailcone behind the aft seat that can accommodate 70 pounds in about 8 cubic feet.

While a few attempts to provide an extension for older A36s have been created in the past, they involve significant structural mods and are all built from scratch.

Simon wanted one for his airplane, so he designed a simpler system that can be mass produced and sold to others, which his Sudbury, Mass.-based company, Approach Aviation now does. 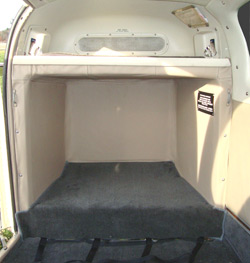 A $5,000 check gets you the completed SmartSpace Extended Baggage Compartment, ready to slide into the tail section of your A36 with minimal aircraft modification necessary, according to Simon. Some owners may have to reposition any avionics boxes housed in that area, but otherwise it’s a simple installation that most any A&P can perform.

The all-metal construction is sturdy and tidy. It includes a luggage restraint net and straps to fold up the aft seat bottoms, freeing up space in the main cabin when those seats aren’t used.