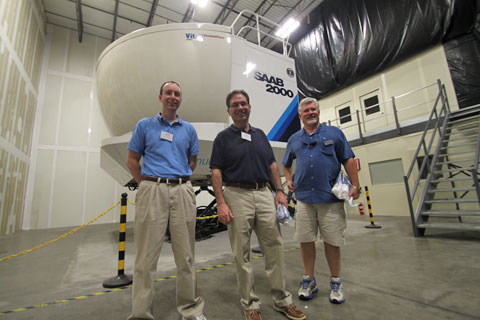 For some, it was a chance to visit an airplane from the past. For others, a chance to experience a whole new category of flying. For all, a chance to meet other pilots from across the country and share flying stories. Typical of AOPA Aviation Roundtable experiences, the strangers in the room became instant friends once aviation pleasantries were exchanged. Within minutes of meeting in Orlando, these AOPA donors were regaling one another with aviation tips and places to fly, the camaraderie and aviation bonds seamless, regardless of piloting experience and type of aircraft flown.

The March 15 and 16 roundtable in Orlando culminated with a visit to SimCom where attendees got the chance to fly a wide variety of flight training devices and full-motion simulators—from piston twins to turboprops and jets, including a 50,000-pound Saab 2000 airliner.

AOPA President Craig Fuller hosts the roundtables multiple times per year throughout the country as a means to engage with AOPA’s diverse donor group—to hear their ideas and perceptions and to encourage networking and friendships. Fuller and other key AOPA executives brief the donors on major association initiatives and provide insights into future strategies for the organization. Typically, the roundtables also include an aviation-themed experience, such as the SimCom visit. Donors pay their own way to the events, which usually last from one to two days over a weekend. 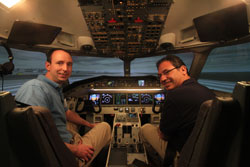 At the Orlando roundtable, for example, pilots Dave Pomerance and John Krystyniak got the chance to “fly” a Cessna Citation Ultra simulator; they both had experience in similar models of the Citation from years earlier. Although Pomerance, an aircraft dealer from Florida, and Krystyniak, an entrepreneur and contract pilot from Pennsylvania, had never met before, within minutes of settling into the full-motion jet simulator, they were operating as a seasoned crew. “It’s amazing how quickly it comes back to you and how little has changed from when I did my checkride—except for the glass displays,” said Pomerance, who was typed in the Citation IISP 28 years ago. Later the two went further upstream and flew a few approaches in the massive Saab 2000 simulator.

Meanwhile, others in the group fulfilled fantasies and explored potential new airplanes. Glenn Kautt, a Twin Commander 690B turboprop owner from McLean, Va., had his first experience flying the Eclipse 500 light jet when he climbed into SimCom’s Level D simulator. As with others, he was surprised at how easy the jet is to fly and at the high quality of the visual simulation. “It was an exceptional experience to compare different sophisticated turboprops and jets against” the Twin Commander, he said.

While one group of pilots took to the simulated skies, another group heard a discussion about datalinked Nexrad images in the cockpit. Simcom customer and King Air owner Dr. David Strahle shared decades of research he has conducted on how to get Nexrad weather radar imagery to the cockpit and the benefits of various types of images, especially composite radar files. A guest on Air Safety Institute webinars and a frequent presenter on the subject, Strahle holds nothing back in the controversial subject of composite versus base-reflectivity images for in-cockpit use. 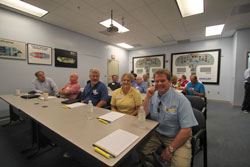 Even though the Aviation Roundtables are brief, they tend to foster new relationships among the donors, as experienced by Brady Sanders, of Lubbock, Texas, who was attending his first such AOPA event. “As a relative newcomer to aviation I did not know what to expect from my first AOPA Aviation Roundtable. It exceeded my expectations in every way,” he said. “The chance to fly the same simulators that the big boys train in was awesome, and even more to hang out with pilots from every walk of life was out of this world. As a result of this great event, I was able to map out a plan to get my instrument rating. This was my first AOPA event but it most certainly will not be the last.”