Get the app Get the app
News & Media AOPA backs &lsquo;Kids Across America&rsquo; campaign 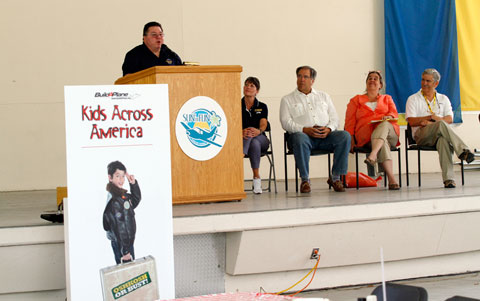 AOPA joined forces with Build A Plane to support the Kids Across America campaign announced March 28 at Sun ‘n Fun.


With more than 200 school-based airplane projects already under way, and more than 300 on the waiting list, Build A Plane has established roots in schools across the country that promise to bear a fruitful crop of future aviators and aerospace professionals. On March 28 at Sun ‘n Fun, AOPA joined forces with the nonprofit education organization to support Kids Across America, a new initiative to help children 18 and under get to EAA AirVenture in Oshkosh, Wis.

With the program, aspiring aviators will raise money through pledges for each mile they travel from home to Oshkosh, donations that will support current and future aircraft projects in schools across the country.

A private pilot certificate, paid for by Redbird Flight Simulations, awaits the top fundraiser, with a week-long trip to the Bahamas reserved for the runner up.

By working on donated airplanes, students get first-hand exposure to aviation and engineering, with lessons that relate directly to a national education priority.

AOPA President Craig Fuller took the stage at Sun ‘n Fun with Bradshaw and Build A Plane President Lyn Freeman, and pledged $1,000 from his own pocket in addition to the $1,000 donation from AOPA to support Build A Plane scholarships.

“It truly is showing young people across the country what aviation is all about,” Fuller said. “It’s becoming part of their lives.”

Educators have embraced Build A Plane because it drives home learning that is critical to future success in any number of fields (including, of course, aviation). Kentucky Institute for Aerospace Education CEO Tim Smith said the experience of hands-on work on an airplane has a lasting effect.

“We’ve given them a laser-like focus on their next steps,” Smith said. “We’re all about career pathways.”