Get the app Get the app
AOPA Members DO more LEARN more SAVE more - Get MORE out of being a pilot - CLICK HERE
News & Media IFR Fix: 'Coupled' approaches 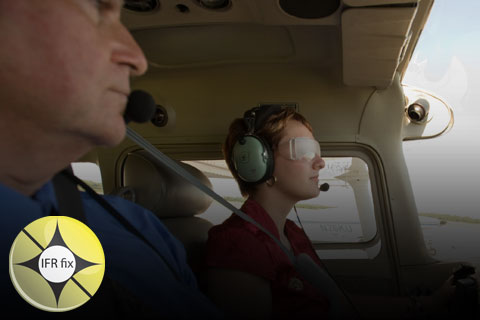 You’ve met another instrument pilot at the FBO. It was just a casual thing at first—chance meetings at the weather computer.

Turns out you had the same CFII, so that was a conversation starter. Now you’ve gone out for coffee, and then lunch at the Chop and Drop.

This morning an email is waiting for you.

“Will you be my safety pilot on Saturday?” The pilot has popped The Question.

Seems a little soon, but assuming no red flags have surfaced this can be a learning experience for you and good service to the other. Glance at the rule to make sure everyone is qualified.

There’s nothing like watching an approach unfold, free of the pressure to perform, to give you a higher appreciation of your IFR skills. Coming down the final approach course, compare even that minor displacement of the course deviation indicator with the perturbing picture in the windscreen, as the missed-approach point draws near. Now imagine the same scenario spiced with scud and tainted with turbulence.

You’re not there to instruct. But your role as visual observer may offer an opportunity to (diplomatically) invite the pilot flying (PF) to solicit the opinion of your mutual CFII on matters of technique that you (privately) consider flawed. If the pilot flying consistently blows headings, he or she probably was never taught to bug them every time.

No heading bug on the DG? Using an idle ADF card or backup VOR head works too.

Frustrating—isn’t it?—to observe a recurring error when the solution is so simple.
If you don’t feel comfortable making the suggestion, let the observation sharpen your own technique. Later, let the pilot see it in action when you reciprocate with the invitation to be your safety pilot.

As safety pilot your primary duty is to watch out for traffic, and be sure to place yourself on maximum alert when flying an approach against traffic at a nontowered airport. Obtain prior agreement from the pilot flying that breaking off for conflicting traffic is your call.

Keep scanning for other aircraft while exiting the pattern and let the local folks know where you’re headed. Speak VFR for clarity.

Flying as safety pilot goes well beyond riding along with your new pal. And whether you return impressed or distressed, it will be educational.

Earning an instrument rating is guaranteed to be one of the most challenging, rewarding, and fun projects a pilot takes on during a lifetime in aviation. Each week, this series looks at the IFR experience from a new perspective. Catch up on what you may have missed in the   IFR Fix archive.