Get the app Get the app
AOPA Members DO more LEARN more SAVE more - Get MORE out of being a pilot - CLICK HERE
News & Media Meet the Thunderbirds No. 3 pilot

Meet the Thunderbirds No. 3 pilot 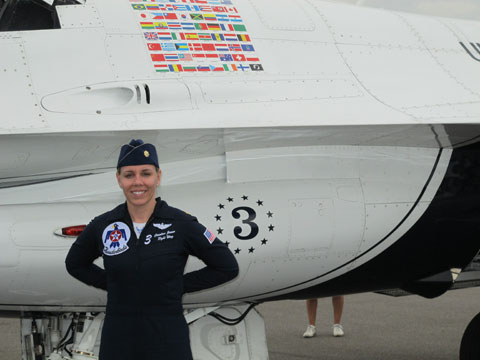 Maintenance crew members form a precise line across the taxiway as they walk the area where the U.S. Air Force Thunderbirds will park to clear it of foreign object debris. The chocks and egress ladder for each jet are in place, the technicians at their posts to direct each pilot, waiting. Energy levels explode as the pilots and the crew’s babies—those red-white-and-blue F-16s—fly overhead announcing their arrival.

The men and women behind the scenes—the maintenance crew—take great pride in their work for the Thunderbird pilots and their country.

“When the pilot gets out there, the only thing they need to do is they step in the aircraft,” explains Staff Sgt. Mark Creel. “We’re the only people in the Air Force where the pilot does not walk around the aircraft at all, puts all his faith in us as the maintainers to make sure it’s good to go.” A simple salute from the technicians signals to the pilot that the jet is ready.

“It’s a very high honor to have. It’s the only place in the Air Force where I’ll ever be able to do this or else they’re always going to go behind us. So, it’s a very high position,” says Creel, who has achieved the highest position on the maintenance crew as the avionics technician for the No. 1 jet. After successfully working his way up from the bottom on the night shift, it’s his fourth and last year with the Thunderbirds.

But his greatest honor is representing active duty, guard, and reserve servicemen around the world. “This is a complete honorable position to be in,” Creel says. “It makes you very humble to realize that you’re one person representing 700,000 people.”

One by one, the F-16s taxi in, park, and shut down with a highly choreographed post-flight securing regimen. The No. 3 jet is the last of the team to touch down at Sun ’n Fun in Lakeland, Fla., on March 29. Only when the pilot removes the helmet and opens the canopy can a spectator tell the difference between No. 3 and the rest of the precision flight demonstration team: A few sprigs of blonde hair not pulled back blow in the wind. Jet No. 3 pilot is Maj. Caroline Jensen, serving the first of a two-year stint with the team.

With more than 2,500 hours total time, including 200 combat hours and providing instruction in gliders and T-38s, Jensen, now a reservist, is only the fourth woman to hold a flight slot with the Thunderbirds and the second to fly the No. 3 jet. She holds the right wing slot of the four-ship formation diamond.

“I love the flying, it’s so much fun,” Jensen says, “but I love to go out and just see people and kind of maybe expose them to something new that they haven’t seen before or open a new possibility for them. I’d like to meet a bunch of kids this weekend and have them send me an email some day and say, ’Hey, I met you at Sun ’n Fun 2012 and now I’m going to be Thunderbird No. 3.”

Jensen’s father flew helicopters in Vietnam with the Marines, so she grew up with a respect for aviation and serving her country. However, her interest in aviation was sparked by a movie with an aircraft flying around clouds. Soaring through the clouds in person is much better.

“It’s a lot more fun than watching it on television, but it’s definitely as rewarding as I thought it would be and then some,” Jensen says. “It’s a lot of hard work, a lot of dedication, but it’s all worth it.”

Flying the fly-by-wire F-16s that can pull up to 9.3 Gs requires weightlifting, which better equips a pilot to endure the G loads, and cardio training. Jensen has withstood 9.2 Gs, but explains that they rarely fly the ship to its limits; the Thunderbirds demonstration flights do not exceed 7.5 Gs. During combat, particularly air-to-ground combat, the most she pulled was 5 Gs.

“When you are supporting an Army guy on the ground, you’re nice and level, fairly slow, and you’re looking in your cockpit at different things. You’re not even thinking about flying the airplane,” Jensen says. “You’re just trying to figure out where he is, and what he’s talking about, and how best to support him that way. So flying is like breathing at that point. It’s just secondary.”

The Thunderbirds fly the F-16s with nose-down trim so that they are always holding varying degrees of back pressure. According to Jensen, during a routine she’ll hold anywhere from 15 pounds to 20 pounds of backpressure. It took a month of training to get used to that, she adds.

She’s also had to get used to being away from her three-and-a-half-year-old son. The Thunderbirds’ performance schedule frequently takes her away from home. Her workweek runs Thursday through Tuesday. “Wednesday is our weekend, which we spend washing our clothes and repacking our suitcase,” Jensen says. Jensen and her son use the computer and telephone to talk while she’s away, and her husband, a Delta Air Lines pilot, often will bring their son to the shows.

During the shows, Jensen and the rest of the Thunderbirds visit schools and hospitals, and talk to airshow spectators to encourage others to pursue their dreams in aviation, the Air Force, or wherever their passion lies.

“You’re gonna hit bumps along the way; if you didn’t you wouldn’t be normal. You’ve just gotta keep going, stay in the books, and keep studying,” Jensen says. “If somebody doesn’t teach you in a way that makes you understand just ask a different instructor. Everybody teaches things a little bit differently. You’ll get it. It’s fun.

“All you need is the desire. The rest is just work for it.”

Jensen knows that first-hand. When she started down this career path 18 years ago at the Air Force Academy, she had only gone on four flights in her life.