Get the app Get the app
AOPA will be closed July 4th, in observance of the Independence Day holiday. We will reopen at 8:30 am ET on Tuesday, July 5.
News & Media Avionics: KSN700 Ready for Prime Time

Most pilots could easily identify Garmin as the number-one provider of new general aviation avionics, but few might realize that Bendix/King is number two. A new management team at the former market leader hopes to capitalize on that position.

Bendix/King was the powerhouse avionics producer in the 1970s, 1980s, and much of the early 1990s. However, it went quiet after a series of mergers and acquisitions that ultimately led it to being a subsidiary of Honeywell Aerospace. Today, under the leadership of a new president, Kevin Gould—formerly of Piper Aircraft and various other aerospace companies—along with a new Bendix/King management team, the company plans to wipe the dust off that iconic brand while earning the trust and market share of a whole new generation of pilots.

The first step in the revitalization was moving the company out from under the corporate overhead of the giant Honeywell brand. As a new, separate business unit headquartered not in Phoenix with Honeywell Aerospace, but in Albuquerque, Gould said the company is prepping for a comeback. 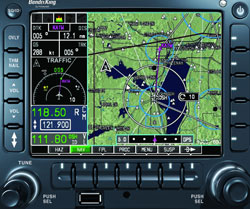 Bendix/King's KSN700 multi-role flight management system is at the heart of the company's strategy to attempt to return to a market leadership position. The unit is being developed in partnership with Aspen Avionics and is expected to be available by the end of the year.

He has hired two new vice presidents, including Roger Jollis as vice president of marketing. Jollis, formerly of Garmin’s automotive division, is, like Gould, an active GA pilot.

“We have to have the focus and accountability in this market. We plan to be a major supplier of technology for this segment,” said Jollis. He sees the enormous installed base of Bendix/King products as a lucrative business opportunity, but he listed five attributes the company must adopt if it is going to be successful in winning back pilots: innovation; intuitive interfaces; reasonable costs for products and support; world-class customer service for dealers and retail customers—including superior tools to help pilots learn new systems; and reliability, an attribute that Bendix/King has maintained for decades—evidenced by millions of products still in the field decades after they were manufactured.

Gould said the Honeywell relationship provides a level of financial stability not available to smaller companies while also providing a ready stream of technology developed and paid for by Honeywell’s high-end avionics development efforts.

The long-delayed KSN770 flight management system, navigator, and communicator is an example. The heart of the FMS is the same as the one in the Apex avionics suite at home in numerous turbine airplanes. The KSN770 project was delayed under the old management structure; Gould sees it accelerating under the new Bendix/King and its relationship with Aspen Avionics, which is under contract by Bendix/King to develop the interface. The new product is scheduled to ship by the end of the year.

Jollis promises numerous additional new product announcements in the coming months that will showcase the company’s commitment to the GA market and will also show off the company’s ability to be fleet and fast to market.

Gould, enthusiastic about his new assignment, is seeking other active GA pilots for his team. He needs to hire vice presidents of engineering and customer service and some 100 other positions over the next year, having already filled 50 positions in the company. —Thomas B. Haines

Aspen Avionics has made collaboration—including with competitors—a key part of its brand and culture. The Albuquerque-based company announced a partnership more than a year ago with Bendix/King for developing the interface of the KSN770 flight management system, even though Bendix/King makes primary flight displays and other cockpit displays that may compete with Aspen’s Evolution line of low-cost primary and multifunction displays.

Aspen President John Uczekaj says the relationship makes sense because Aspen doesn’t plan to get into the autopilot business and he was impressed by the Avidyne autopilot. As a former developer of flight management systems for Honeywell Aerospace, Uczekaj says the DFC90 provides capabilities and functions that rival those of flight control systems found in Air Transport category airplanes.

AOPA Pilot had the opportunity to fly behind the DFC90 in an Aspen-owned Cirrus SR22 replete with three Aspen Evolution displays. The attitude-based DFC90 gets its position information from the Aspen attitude-heading reference system. In return, the DFC90 sends mode information back to the Aspen system, where it is displayed for the pilot at the top of the PFD.

The DFC90 is meant to be a slide-in replacement for the S-Tec Fifty-Five X autopilot, which is a rate-based system. While highly reliable, rate-based autopilots, which derive most of their position information from a turn coordinator, do not fly airplanes, especially fast ones, as crisply as an attitude-based autopilot. In fact, based on our demonstration, the DFC90 briskly flies the Cirrus even under highly challenging circumstances. To test the autopilot, we flew a 90-degree intercept to the inbound course of an RNAV approach at 170 knots true airspeed—and about 178 knots groundspeed. While most autopilots would struggle to intercept under such circumstances, the DFC90 smoothly made the turn onto final, straying left of course about a quarter of a dot for only a few seconds. At glideslope intercept, the airplane smartly descended with minimal porpoising as it locked on to the signal at high speed.

Avidyne's impressive DFC90 autopilot has a number of features to keep pilots out of trouble. It is based on attitude, and not on rate information as many legacy systems are.

The DFC90 provides a host of new features that help the pilot reduce workload and improve safety. For example, as we dramatically demonstrated in an exclusive AOPA Live video , the “Straight & Level” button provides one-touch recovery from unusual attitudes when the autopilot is off. Find yourself in the clouds and spiraling downward? Hit the button, and the autopilot will roll the airplane level and pitch the nose up.

When the autopilot is on, an Envelope Protection system works hard to eliminate autopilot-induced stalls and overspeeds. If the pilot commands a climb rate or speed that is not sustainable, for example, the autopilot will pitch the nose down to prevent a stall, allowing the airplane to descend if necessary to maintain a safe speed. The full-time Envelope Alerting system protects against flight envelope exceedances by providing visual and aural warnings to the pilot, even when the autopilot is not engaged. For example, an excessive bank angle will cause a visual alert on the PFD and an aural alert through the headphones. Flap and gear speed exceedances can also be annunciated.

Another feature frequently found only on high-end autopilots is the ability to climb and descend at a selected indicated airspeed, useful for fitting in well with other high-performance traffic in busy airspace.

The DFC90 is already certified for installation in early Cirrus models that don’t have the Garmin G1000 cockpit. Certification efforts on the Cessna 182 are well under way. Avidyne officials report that a V-tail Bonanza was to arrive at their facility on April 2 to begin testing that will lead to certification in that model over the next few months. Other models will follow. —TBH

Sporty’s Pilot Shop and ForeFlight) are making life with your iPad a little sweeter. The two companies worked with Appareo Systems to develop a small, wireless, portable ADS-B weather receiver and WAAS GPS for the iPad.

Called Stratus, the new box is smaller than most handheld GPS units, runs off battery for eight hours, and allows users to get cockpit weather, TFRs, and more on an iPad with no weather subscription. Stratus works off the ADS-B network, which is available in a majority of the country today, and is expected to be fully operational by 2013.

The box was built by Appareo Systems, and works only with ForeFlight. Company chief Tyson Weihs says the weather integrates seamlessly with the app, providing menus for the time the data was received, brightness, and satellite coverage.

Connection to the unit is done through Wi-Fi, which means that multiple devices can connect and receive the information at one time.

Stratus is available for purchase through Sporty’s or Appareo Systems for $799. Shipments are expected April 23. —Ian J. Twombly 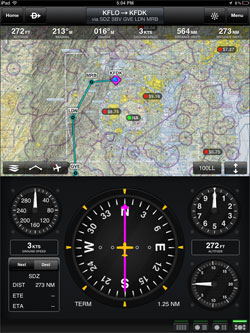 Garmin's new Pilot iPad app is a big step up from the company's previous offering.

Garmin has “Garminized” its iPad application. Garmin Pilot replaces the Pilot My-Cast application the GPS maker had come to the tablet market with just a few years ago.

The interface and features of Pilot are all new. The opening map page is not unlike a 696 or 796. In landscape, the full map page is displayed, but turn the iPad to portrait, and the map can be split in half with an HSI display that Garmin users will immediately recognize.

Navigation is through a main menu button on the top left. Tap it and selections for map, weather, charts, airport information, and two flight plan choices come up. Jumping to and between these pages is quick and easy. Flight plans can be created or altered graphically on the map page, or through text on the flight planning page. This way users can have their preference of touching to add waypoints, or adding them via text. Pilot also enables full route planning with airways.

Charting is another of the app’s strong points. Individual approach plates are categorized into “books” by airport. Every chart is georeferenced (additional fee), and the plates will automatically switch to the airport diagram upon landing, assuming one is available. Garmin calls its georeferenced airport diagrams SafeTaxi, and the increase in situational awareness is palpable.

Creative and useful tricks are scattered throughout the app, including a “bagel” menu that comes up when a waypoint is selected on the map page. Tap and hold, and a round menu pops up around the waypoint with options to add to the route, get more information, and more. The ability to get live weather with the Baron Mobile Link further enhances functionality and safety.

With this update, Garmin has placed itself with other top aviation application developers. The application is free to download and try, $99.99 for a year, and additional for SafeTaxi and georeferencing. It’s available now in the Apple App Store. —IJT