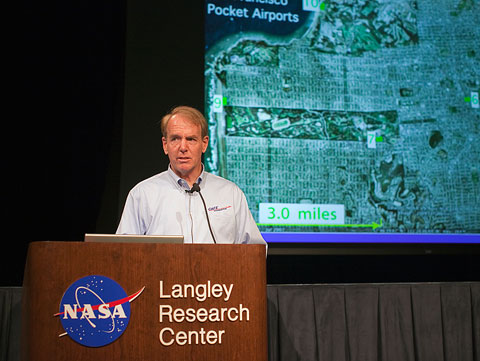 
Wheel motors and silent propellers drive aircraft skyward from 400-foot runways in the future envisioned by the CAFE Foundation, and major corporations are taking note. A symposium April 27 and 28 on the latest advances in electric aircraft technology drew representatives from industry giants including Boeing and Siemens, along with researchers and innovators from nine nations, according to CAFE Foundation President Brien Seeley.

“The world is awakening to the possibilities of electric flight as a serious potential market,” Seeley said.

New battery technology announced at the symposium held in Santa Rosa, Calif., will soon extend the range of current electric aircraft five- to tenfold, batteries able to store 1 kilowatt hour of energy or more per kilogram.

“That will end the range anxiety, and transform surface vehicles as well as air vehicles,” Seeley said. “They’ve already passed that in the laboratory.”

Seeley announced the CAFE Foundation is seeking a new federal grant to continue the Green Flight Challenge, which in 2011 inspired the design of aircraft able to carry at least two passengers at 200 mph for 100 miles, consuming the equivalent of no more than one gallon of fuel per passenger. Designers vied for a $1.35 million grand prize, and Pipistrel won with a Taurus G4 that far exceeded the minimum requirements.

That, Seeley said, is one of the benefits of using competition for prizes to spur innovation.

“The happy news is that if we run a technology prize and say you can’t win the million dollars unless you’re below 60 decibels, I’ll bet dollars to doughnuts that somebody’s going to go below 50 decibels, or even 40,” Seeley said. The foundation is optimistic that the federal government will underwrite the purse for the next Green Flight Challenge, and more to follow.

The White House recently lauded the competition as a model for others to follow, noting in a report that “they only pay for results. In contrast to grant-driven efforts, no award is made until a competitor meets each and every criteria set out by the prize sponsor. As a result, prizes shift risk from the government to the competitors.”

Seeley said the foundation has charted a course of future competitions that each demand specific elements of a vehicle with promise to transform transportation just as profoundly as the automobile and airplane did at the dawn of the twentieth century.

Wheel motors will give an extra boost facilitating short takeoffs from short, community-based runways, or “pocket airports.” Nearly silent motors will drive low-noise propellers that cut the aircraft’s overall noise signature at 125 feet distance to that of a typical conversation at three feet: 60 decibels. Add autonomous control, and a vehicle emerges that can eliminate gridlock. On that point, Seeley understood a fellow pilot’s sensitivity, and noted that pilot-free flight was “not our idea.”

“Frankly, at this point, our impression is that it’s an unstoppable trend,” Seeley said. It is a trend with benefits for GA nonetheless, Seeley noted: If autonomous electric aircraft operated from tiny airstrips in densely populated areas reduce traffic by even 4 percent, by some estimates, gridlock will end.

“It’s the car jams on the ground that are robbing our Cessnas and Pipers of their high-speed advantage,” Seeley said.

Autonomous aircraft, not needing room for a pilot, could meet the needs of most commuters, Seeley said: Most automobile trips are made with two or fewer passengers. Requiring fewer seats by eliminating the pilot's seat also allows designers to reduce weight and power requirements, and in turn, noise.

The electric air taxi itself, able to land on the grounds of major commercial airports, could dramatically decrease the door-to-door travel time. By operating quietly enough to avoid annoying too many people, this aircraft of the future could gain access to city centers and put travelers within a short walk, or golf cart ride, to their destination.

“The time that this saves means that this electric air taxi is going to trump any other form of transportation on trips of between 40 and 400 miles, by a factor of about three to one,” Seeley said. “Part of our (purpose for the symposium) was to show that yes, indeed, this can be done.”

The next Green Flight Challenge, pending federal funding, will push the limits of shortfield takeoff, using lightweight electric wheel motors able to produce torque even before they start to turn, and deliver 30 horsepower at each wheel. Acceleration—and a short ground roll—is limited more by human comfort than mechanical capability, Seeley said. “It depends how many Gs you want to subject grandma to.”

That challenge will be followed by a competition to reduce noise, and later a competition to navigate an obstacle course under autonomous (computer) control (backed up, for now, by a safety pilot), he explained.

Seeley said the truly exciting prospect is not just what designers will do to meet the criteria, but what they will do to beat it—and what else will come from those efforts, “all of the amazing things that will come out of the woodwork.”