World records in the works There is a flurry of world records poised to hit the news this year. Three pilots are planning to circle the globe, either for a record or for good causes.

World records in the works

There is a flurry of world records poised to hit the news this year. Three pilots are planning to circle the globe, either for a record or for good causes. One will attempt a record by going straight up beneath a balloon. Here’s the news to watch for. 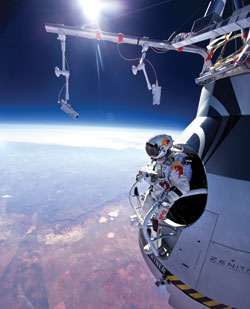 The Red Bull Stratos project in Roswell, New Mexico, is aimed at breaking the world altitude record for a parachute jump by having Felix Baumgartner step out of his capsule at 120,000 feet, breaking a record set decades ago by Joe Kittinger, now 83, in 1960. The director of mission operations is the same Joe Kittinger. There is no date for the jump, but a test leap from 71,580 feet March 15 went well—except for Baumgartner’s extremely cold hands. The temperature at that altitude was minus 90 degrees Fahrenheit.

Solar Impulse, the Swiss project that intends to fly around the world on solar-charged batteries, tested its pilots’ ability to stay awake all that time. A test in a simulator a few weeks ago went well. There will be two pilots, but they plan to either sleep, or relax, in 20-minute periods. The aircraft will sink during the night as the batteries drain, and climb during the day as the batteries are recharged to power electric motors.

Thinkglobalflight.org will send aviation educator Judy Rice of Florida on a trip around the globe in a Cirrus SR20 in late 2013. International student controller teams will assist with the flight. They’ll see through their participation the value of science, technology, engineering, and mathematics, and learn about the potential of careers in aviation and the aerospace industry. Green technologies will be highlighted. The flight has already drawn major sponsors.

Already halfway through his trip, Matevz Lenarcic of Slovenia spent 16 days stuck in central Australia with structural repairs to his one-of-a-kind Pipistrel before continuing on. To be fair, it wasn’t a production Pipistrel that developed cracks in the tail, but one built especially for the trip, and different in construction than the
Pipistrel sold to the public. He flew the repaired aircraft over Mount Everest. A photographer and scientist, LenarcicÄ� is using the flight to study the Earth’s fresh water supply, and will publish his third book of photographs. 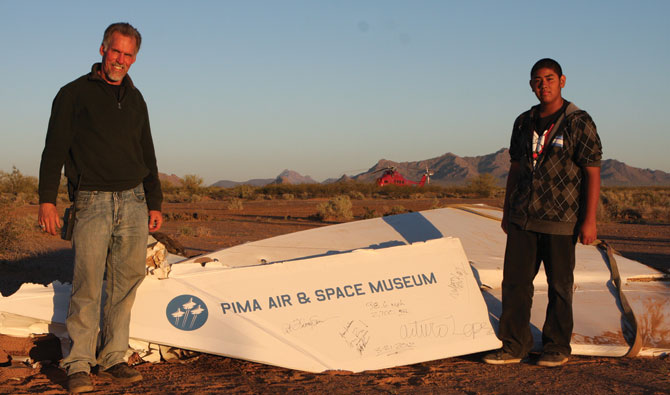 To borrow a line from the movie Ghostbusters, when you need a 45-foot-long paper airplane, “Who you gonna call?” Art Thompson. He’s the problem-buster. The same guy who helped build the B–2 bomber, the Batmobile for movies, the Red Bull car with the can on top, and the F–35 fighter used in 2007 by an evil pilot to attack actor Bruce Willis in Live Free or Die Hard. That’s who.

Thompson is cofounder of Sage Cheshire Aerospace, the company that built the capsule Felix Baumgartner will use to break the world record for the highest parachute jump (102,799 feet) late this year. His other company, A2ZFX in Lancaster, California, does the Hollywood effects.

One day the Pima Air Museum in Tucson, Arizona, came to Thompson with a crazy idea to inspire youth toward something other than video games—specifically, an interest in aerospace, science, and engineering: Build a 45-foot-long paper (actually Falconboard, a corrugated graphic board) airplane. Thompson had built an eight-foot paper airplane as a kid. It would be named after the youngster who built a paper airplane that could go the farthest. That turned out to be 12-year-old Arturo Valdenegro. The completed airplane was named Arturo’s Desert Eagle.

The airplane flew March 21 after it was dropped from 2,700 feet by a Sikorsky helicopter, using the private runway of aerobatic pilot Kirby Chambliss about 80 miles north of Tucson. It achieved stable flight until it reached a speed of 98 miles an hour. At that speed, the elevator controls could no longer hold their shape, and the craft plunged from 600 feet. But it flew, to the delight of 20 or 30 youngsters and 100 adults. Hopefully, it was an inspiration.

An expedition will launch in July to recover evidence of wreckage believed to be that of Amelia Earhart’s Lockheed Model 10 Electra, lost 75 years ago during her attempt to circumnavigate the globe. The airplane and its occupants were never found, in spite of a massive air and sea search that spanned 150,000 square miles of open ocean.

The International Group for Historic Aircraft Recovery (TIGHAR) will lead a deep-water research team to an island in the Pacific chain of atolls known as the Phoenix Islands. There, a University of Hawaii vessel will conduct a detailed search and mapping of the area.

The search stems from a clue that has been spotted in the original negative of a photo taken three months after Earhart’s disappearance of the western shoreline of Nikumaroro. The negative shows a protrusion from the reef resembling the landing gear of an aircraft. Photo analysts from the State Department say it appears to be the landing gear of a Lockheed Electra.

“If you ever want a case of finding a needle in a haystack,” Earhart’s disappearance is it, said Robert Ballard, professor of oceanography and president of the Ocean Exploration Trust. “I was totally convinced it couldn’t be found.” Ballard, whose previous explorations have led to the discoveries of the RMS Titanic, the USS Yorktown, and the torpedo boat PT-109 commanded by John F. Kennedy during World War II, said he was brought in to review TIGHAR’s research strategy.

Secretary of Transportation Ray LaHood said the voyage to recover Earhart’s aircraft is only possible because of what Earhart accomplished as a record-setting pilot. “Because of Amelia Earhart, our world is smaller,” he said. —Jill W. Tallman

‘Uncle Joey’ is a pilot

In the “guess-who-stopped-by-the-office” category is Dave Coulier, best known as Uncle Joey from the 1980s TV series Full House. Coulier was a hit at AOPA’s Frederick, Maryland, headquarters—especially with the women, who remember him as the funny uncle of the Olsen twins and best friend of Bob Saget. Coulier is a clean-talking stand-up comedian (he tours with the Clean Guys of Comedy). 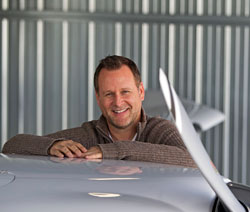 Coulier toured AOPA headquarters just like any other member—he has been a private pilot since 1979. “My dad had a friend who flew a Cessna 180 at an uncontrolled field in St. Clair Shores, Michigan. When I was just 5 years old, my father took me along. That first flight on a cold winter day got me hooked on aviation for a lifetime. When I was a teenager, I got my private license at that same airport,” he says.

Coulier, who has about 1,000 hours, is instrument-rated. He based his Bonanza B35 at California’s Santa Monica Airport for a number of years. “I got tired of being grounded on foggy days and started instrument training with Mark Doolittle—yep, he’s related to Jimmy Doolittle of Raiders’ fame—and six months later I was filing IFR and was a safer and more knowledgeable pilot too.”

The actor once flew his airplane from Santa Monica to the Full House set in Burbank. “It took 12 minutes. I was so tired of sitting in LA traffic. But when the studio heard about it, that was the last time.”

The comedian—he hosted America’s Funniest People for four seasons—loves the joy of flying. “Have fun! We are so lucky to be flying,” he says.—Julie Summers Walker

After 62 pairings of some of aviation’s most respected aircraft, pilots voted and talked smack with one winner prevailing in AOPA’s Favorite Aircraft Challenge online. Even though the storied Douglas DC–3 put up a courageous fight in the finals, it could not attract enough votes to overcome a wave of support by P–51 Mustang fans who helped crown the Mustang as 2012 challenge champion.

World War II-era fighters racing wingtip-to-wingtip, just 50 feet above the ground and at speeds exceeding 500 mph are a sight usually reserved for fans who attend the Reno National Championship Air Races held every September in Reno, Nevada. Those who can’t make the trip may want to visit the nearest IMAX theater and experience the next best thing: Air Racers 3D.

This 40-minute documentary chronicles the history of air racing and features the rise of 24-year-old Steve Hinton from a volunteer in his family’s business, the Planes of Fame Air Museum in Chino, California, to an unlimited gold class champion piloting Strega, a highly modified P–51 Mustang. An ambitious film, Air Racers 3D also covers the Reno experience from static aircraft displays to thrilling air show performances, such as the Royal Canadian Air Force Snowbirds.

Visually stunning, Air Racers 3D was filmed at the 2009 and 2010 Reno Air Races. In 2011, more footage was shot at the Planes of Fame Museum and at Reno-Stead Airport. Footage of racers from all six classes is included, so viewers get a taste of the excitement across the board.

Produced by 3D Entertainment USA and Pretend Entertainment in association with Stereoscope, Air Racers 3D is the brainchild of Christian Fry, director of the film. Fry, who flies a 1948 Navion, attended the Reno Air Races for the first time in 2004 and knew he had to make the movie.

“Aviation is just a subject matter that lends itself so well to the IMAX giant screens,” Fry said. “To put audiences in the cockpit of these airplanes and give them a sense of what it’s like to fly at 500 miles an hour. To have that feeling of flight, it’s just a really incredible experience.” —Geri Silveira