Get the app Get the app
AOPA will be closed July 4th, in observance of the Independence Day holiday. We will reopen at 8:30 am ET on Tuesday, July 5.
News & Media First pilot completes Redbird's experimental training

Pilots pursuing advanced training and ratings regularly use full-motion flight simulators; some gain type certificates in sims having never flown the actual aircraft. How would that training format translate to primary instruction?

Redbird Skyport is putting an experimental training program to the test at its headquarters in San Marcos, Texas, to see if completing all training in a simulator first—including mock checkrides—before beginning flight training is “a viable training method,” said Redbird Skyport Marketing Director Josh Harnagel.

The company’s first test case, Abraham McIntyre, executive director of Bahamas Methodist Habitat, earned his private pilot certificate May 7 after a four-week course with 33 hours of simulator training followed by 41 hours of flight time. He earned his certificate within the national average of 60 to 80 hours of training, but Harnagel said the school hopes to hone its training curriculum based on McIntyre’s and others’ results from the experimental “simulator first” program to decrease the number of hours spent in the airplane and perhaps even the total training time to earn a private pilot certificate. So far, about five other students are enrolled in the experimental program.

Redbird Flight Simulations had donated a $9,500 training package to Bahamas Habitat, sister organization to Bahamas Methodist Habitat, to send a candidate to the training program. The group selected McIntyre because he is based in the Bahamas and could respond quickly after natural disasters while other volunteer pilots are activated for a larger relief flight effort.

AOPA followed McIntyre through the ups and downs of the training process.

“I feel rough, it’s just not clicking right now,” McIntyre told an instructor during the “rollercoaster” week two of the training when he experienced a learning plateau common among students. That low point was quickly followed by a high a few days later when he completed all of his simulator training and experienced his first instructional flight in a Cessna 172.

Harnagel said the school will compare the results of the simulator-first training program with its control group which alternates simulator and flight time throughout the course. Redbird Skyport staff already have started analyzing McIntyre’s progress and are implementing some changes in their curriculum to improve instruction in the simulator. 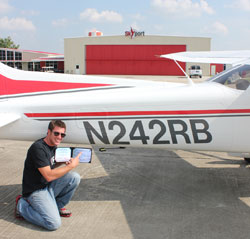 Before transitioning to the Skyhawk, McIntyre practiced maneuvers in the simulator alone, which helped boost his confidence for his first solo.

“This is it, this is where—I’m not really sure in aviation terms—the rubber meets the road, the wind gets underneath your wings,” McIntyre said of his thoughts as he taxied onto the runway at San Marcos Municipal Airport for his solo April 29. “I felt very confident, and I really feel that the simulators really helped me.” He attributed that to his solo practice in the simulator that started on his second day of training.

The simulator provided McIntyre with some advantages, including the ability to “fly” when the weather would otherwise prevent a lesson and repeatedly practice crosswind landing technique from final approach to touchdown. Students training solely in aircraft typically practice up to 10 crosswind landings during a lesson because they must fly the entire pattern. McIntyre said he did 35 or 40 crosswind touchdowns within 20 or 30 minutes in a crosswind simulator.

McIntyre noted that the simulator training helped him to be more prepared—and productive—during lessons in the Cessna 172: He learn the procedures for all of the maneuvers in the simulator, so that he just had to repeat them in the aircraft while becoming familiar with the different handling characteristics. McIntyre joked about some of the video-game-like qualities of simulators, but he repeatedly compared the transition from the flight simulator to the Cessna 172 to flying different types of aircraft.

Redbird Skyport will analyze the students’ performance in the experimental program to see if they can increase instruction time in the simulator to decrease the amount of time it takes to gain proficiency in the same maneuver in the airplane. As an example, Harnagel explained that they would test whether a student could spend two hours learning steep turn in a simulator and grasp it in the aircraft in 30 minutes, instead of an hour in each. The school plans to continue the experimental training program and report its finding during EAA AirVenture this summer. 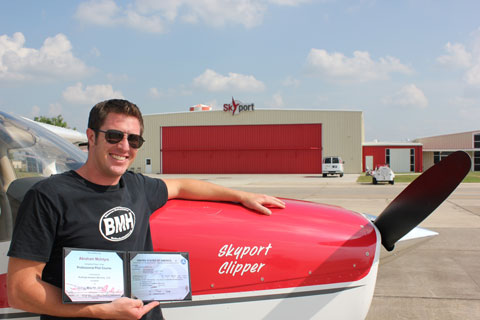