Get the app Get the app
Already a member? Please login below for an enhanced experience. Not a member? Join today
News & Media Cub summer: Maryland couple to fly J-3 to Lower 48 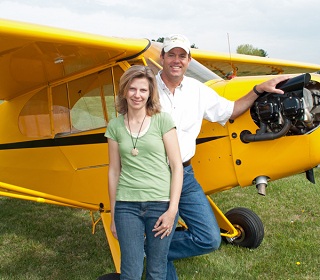 Meredith Tcherniavsky and Dana Holladay plan to spend the summer touring the 48 contiguous states in their 1938 Piper J-3 Cub.

If there’s anything more tantalizing than the prospect of flying a classic aircraft to all 48 contiguous states, throw in the fact that the aircraft in question is a 1938 Piper J-3 Cub and you may have just created the ultimate pilot bucket list item.

Meredith Tcherniavsky and Dana Holladay of Rockville, Md., plan to launch July 4 on a two-month adventure that will take them 8,000 miles in their J-3 Cub. Tcherniavsky and Holladay, who are husband and wife as well as business partners—they operate Holladay Aviation, a flight instruction and aerial photography business—are writing a book about the trip. Fly the Airplane will chronicle the couple’s flying adventures together and, they hope, inspire readers to pursue their own dreams.

“Touring the country low and slow in a small airplane is something we’ve always wanted to do, and the timing just felt right,” Tcherniavsky said. “Each day is an opportunity to do something incredible. We want to show people that you don’t have to be wealthy to enjoy a rich and rewarding life. You just have to get out there and make the best of what you have right now.”

The book will relate how the lessons the two learned as pilots helped them to cope with some rough experiences in their lives, and how aviation brought them together, Tcherniavsky said. The second half will be a travelogue of the trip. “The trip itself is a celebration of all we’ve overcome and accomplished through flying, and through each other,” she said.

The pilots checked off six states from the list of 48 when they purchased the Cub in Florida and flew it home to Maryland in January. On July 4, they will depart from Fallston, Md., and tour the Northeast in time to join the mass Cub arrival at EAA AirVenture in Oshkosh, Wis., which will celebrate the seventy-fifth anniversary of the aircraft. From Oshkosh they’ll head west and work their way counterclockwise across the country, with the hope of returning to Maryland around Labor Day weekend.

Tcherniavsky and Holladay plan to camp out and land at as many grass strips as possible. They plan to carry “the bare essentials,” a tent, and a camera. On board the J-3 will be a Spot satellite GPS messenger so that others can follow their progress, and they’ll update from the road via Twitter ( @danamerfly) and Facebook.

You can preorder the book for $25 per copy. Through July 4, $5 from each order will be donated to the Bob Hawkins Flight Scholarship Award. See the website for more information.