Get the app Get the app
Already a member? Please login below for an enhanced experience. Not a member? Join today
News & Media New turboprop flies in Australia 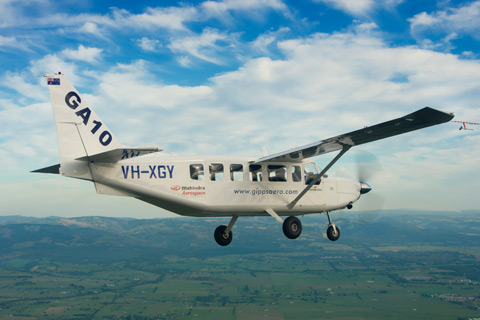 GippsAero, the Australian subsidiary of the Mahindra Group, of Mumbai, India, announced the first flight of a new aircraft the company described as the first single-engine turboprop designed and developed in Australia.

The 10-seat GA10, powered by a Rolls Royce 250 engine, was based on the GA8 Airvan utility aircraft. The first flight took place May 1 at Latrobe Regional Airport in eastern Victoria, Australia.

GippsAero said it expects the GA10 to be certified by Australia’s Civil Aviation Safety Authority and available for customer delivery by the second half of 2013. The aircraft is designed as a step-up aircraft for piston pilots, and is also suited to “a wide range of applications from passenger and freight work to air survey and surveillance roles,” GippsAero said in a news release.

In September 2011, GippsAero announced that it had flown a prototype CNM-5 five-seat single engine piston aircraft powered by a Lycoming IO-540 engine.