Get the app Get the app
AOPA Members DO more LEARN more SAVE more - Get MORE out of being a pilot - CLICK HERE
News & Media Rock your wings to Big Brother: Squawk, talk, file in TFR 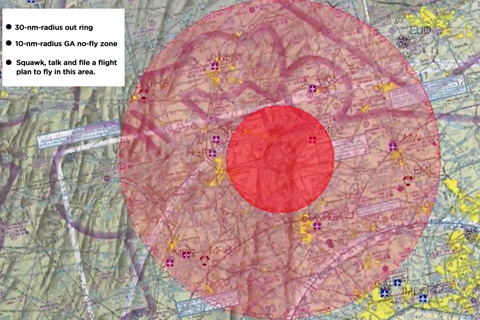 The mental image of a Cessna 150 shut down on the middle of a runway, its two pilots face down on the pavement, held at gunpoint, is hard to forget. It’s been seven years since the two pilots from Smoketown, Pa., violated prohibited airspace over the nation’s capital in 2005 and were forced to land at Maryland’s Frederick Municipal Airport where AOPA is headquartered. The sights from that day have greatly influenced my flying.

So, when the G8 Summit took place at Camp David May 18 and 19 and a 30-nautical-mile temporary flight restriction engulfed the Frederick airport, I quickly made a mental note to not schedule any flights that weekend. Then came the need to make a business flight to Ohio on May 19 during the TFR’s effective time.

Notams for every TFR list flight operations that are prohibited, like flight training, glider, balloon, unmanned aircraft, and seaplane operations to name a few; when transient flights will be accepted; and the procedures to fly VFR or IFR to or from an airport within the outer ring (between the 10- and 30-nm boundaries).

Pilots who want to fly from Point A to Point B, with one or both being in the TFR, need to follow three steps:

Sounds deceptively simple, especially when the consequences for noncompliance or a mistake could trigger an intercept. Two Cessna 172s that weren’t following the procedures to fly within the TFR were intercepted during G8 Summit on May 18 and escorted to land in Pennsylvania, while NORAD monitored five “tracks of interest” over the two days, according to Tom Zecha, AOPA manager of aviation security. One of the Cessna 172s was intercepted by an F-15 and a Black Hawk. 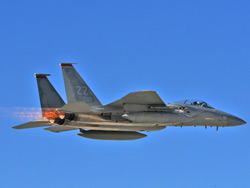 Not wanting to take a chance at violating the TFR, I called Potomac Tracon the night before my flight to verify the procedures for exiting the TFR on a VFR flight plan (departing IFR doesn’t require any extra steps). Potomac gave me a direct line to call for the procedures and thanked me for inquiring—they don’t want pilots to be intercepted any more than we want to be. Because I would be departing before Frederick’s control tower opened for the day, I was instructed to call right before my flight to receive a discrete transponder code and the frequency to contact Potomac when I had climbed high enough to establish contact. The key, the controller stressed over the phone, was to be squawking my discrete code before the Cessna 172’s wheels left the runway because “they” would be watching—“they” referring to NORAD and other government agencies, not other air traffic controllers. My flight plan was already on file with flight service, and Potomac activated it. (However, it also could have been activated by flight service.)

I must admit that I had a lump in my throat as I applied full power to depart Runway 23—the very runway on which the Smoketown pilots had been held at gunpoint—knowing that “they” were watching my flight track. About 1,500 feet agl, I established two-way communication with Potomac Approach on the assigned frequency. I frequently scanned the area around me for an approaching F-15 or Black Hawk until I cleared the TFR. I continued to receive flight following on my discrete transponder code until I reached my destination; an IFR departure at Frederick canceled his IFR flight plan once clear of the TFR but requested to receive flight following.

In 2005, pilots of a Cessna 150 were held at gunpoint on the runway at Frederick Municipal Airport after violating prohibited airspace. Photo courtesy of The Frederick News-Post/Bill Green.

“Squawk, talk, and file—that’s really it,” Zecha said. “Just make sure to stay clear of the inner GA no-fly zone and always monitor 121.5 MHz. If you do something wrong but can be reached on 121.5 MHz, that will take all the drama out of the intercept.”

Monitoring 121.5 MHz also can provide some entertainment. While I was flying within the TFR, I heard repeated radio calls to “Songbird” over the guard frequency. I resisted the urge to say that “Skyhawk” was on guard.

On the return leg, flight service recommended reminding air traffic control that the final destination was inside the TFR so they would grant flight following services, which otherwise would only be provided on a workload permitting basis. That suggestion worked beautifully with ATC. I activated my flight plan with flight service and then received flight following, keeping me in two-way contact with ATC and giving me a discrete transponder code. Once those three items are fulfilled, there’s no separate clearance required to enter the TFR.

Potomac Approach reminded pilots flying into Frederick, whether on a VFR or IFR flight plan, to maintain their discrete transponder code until after landing.

Both legs of the flight within the TFR worked seamlessly, but the possibility of a malfunction always exists—for example, a radio failure. In the event of a radio failure while inside the TFR, Zecha recommends alternating squawking 7600 and 7700. This lets everyone monitoring the flight know that you have a problem, and it satisfies the requirement for maintaining two-way communication with ATC. Next, pilots should exit the TFR on the most expeditious route (again, avoiding the 10-nm GA no-fly zone). Keep in mind, the quickest way to exit the TFR could be landing at the nearest airport. For example, an aircraft that’s only two miles from an airport but several miles from the lateral limit of the airspace should land.

Even after dotting every “i” and crossing every “t,” flying within a TFR can be unsettling—after all, every move is being monitored not only by ATC, but also by NORAD and several other government agencies. I gulped when ATC reminded me that “they” would be watching. Even though I understand the extra security needed to protect the president, all of the scrutiny feels a little Big Brotherish.

The constant reminders and helpful tips from controllers and flight service briefers made the flight quite anticlimactic—no F-15s or Black Hawks in sight. ATC and flight briefers are aware of the procedures and are happy to provide guidance or verify the procedures.

So why not keep those plans the next time a TFR pops up in your area? Review the notam, talk to flight service or ATC beforehand, and follow the procedures. Let “them” watch. Do it right; show “them” how responsible and professional general aviation pilots are. And, enjoy that flight, free of F-15s and Black Hawks.