Dancing a Jimmy Doolittle move with airshow legend Sean D. Tucker across the Virginia sky in an Extra 300 was so surreal, it made this aviatrix’s heart flutter and head swoon. OK, maybe it was the negative-4-G outside loop.

“Are you all set to kind of get hurt?” Tucker asked as we dove to 180 knots before pitching up, rolling inverted, and adding forward pressure to form the outside loop invented by Doolittle. “Push it, girl, push harder than that,” he coached, my face flushing as blood rushed to my head. Adding forward stick on the Extra seemed counterintuitive—doing so increased the pressure that was quickly reaching my previously untested threshold for negative Gs. Only when the pitch of his voice changed from the G forces did he say, “Right about there.” Despite attempts to exhale calmly and relieve the pressure, my head felt as if it were going to explode; his earlier comment, “Don’t bust my eyeballs out,” loomed fresh in my mind.

As soon as we completed the loop and rolled upright, the pressure inside my head subsided, but it took a few minutes to regain my bearings. The negative Gs were much more uncomfortable than the positive 5 Gs we pulled on other maneuvers. “It takes a long time to get used to negative Gs,” Tucker explained. “It’s a different world.” The outside loop left what Tucker later called “a little Jimmy Doolittle love”—a couple of burst blood vessels in my eyes. Minor discomfort to fly, for a moment, like Doolittle.

It’s all about finesse…

Tucker, a boisterous, passionate showman of the thrills of aviation, has wowed millions of fans in more than 1,000 performances since the mid-1970s; the key to his style of aerobatics and airshow performances is finesse. No matter how quick or dizzying the maneuver, or how body-beating the positive and negative G forces, Tucker transitions to and from every maneuver with finesse and, in some cases, with nearly imperceptible control pressures.

“Do you sense my inputs on the stick at all?” Tucker asked. Nope, not even a hint of the inputs as the Extra transitioned from a climb to a coordinated climbing turn. Tucker starts the novice with climbs and clearing turns to feel the aircraft’s nuances and become one with the machine.

“We wanna kind of dance with the airplane,” he said, emphasizing the importance of stick and rudder skills. The aircraft should become an extension of the body and flow gracefully through the air. That doesn’t mean the dance will be easy. The Extra responds precisely to control inputs and can withstand positive and negative 10 Gs, putting the body through a beating but prancing elegantly across the sky. That’s a signature of Tucker, who, like Doolittle, created many of his own maneuvers that he performs with Team Oracle in a custom-designed Challenger II biplane.

Ballistic, barrel, and slow rolls develop coordination and timing. What Tucker calls the ballistic roll (my favorite of all aerobatic maneuvers) simply uses ailerons to roll the aircraft through 360 degrees; but leveling off is deceptively tricky. “It just takes a while to get your timing correct,” Tucker said. The 20,000-plus hour performer makes the maneuver look effortless—it’s the finesse again—rolling three times to the left in about as many seconds (the Extra 300L’s roll rate is 340 degrees per second) and stopping upright with the precision of, well, Sean D. Tucker. (He’s the only civilian pilot to have flown close formation with the Navy Blue Angles and Air Force Thunderbirds, according to the Team Oracle website.)

The barrel roll, no longer judged in aerobatic competition, Tucker said, is his roll of choice for new passengers. While easy on the body, the 1-G maneuver is difficult to perform, judging roll rates and maintaining heading. Do it right, and Tucker will exclaim, “You’re a prima ballerina, baby!” Wander 20 degrees off heading, and he’ll be just as quick to point that out. Slow rolls, which require top rudder pressure when the aircraft is rolled on either side and stick pressure when upright or upside down, focus on coordination. Proper inputs prevent the sleek Extra’s nose from dropping and rapidly gaining airspeed, adding unnecessary G forces to the maneuver.

The flying carpet, as Tucker calls the Extra, with its low wing and bubble canopy, is beautifully built to respond to the pilot’s control inputs. Just be acutely aware of all inputs. “When your fingers let go and you relax, the airplane does exactly what you tell it to do,” Tucker said, which can make maneuvers less graceful, such as inadvertently flattening a loop. 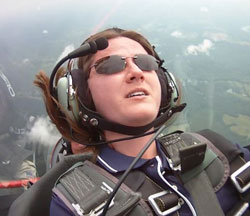 The negative 4 Gs pulled during an outside loop make my head feel like it's going to explode. Exhaling calmly helps relieve the pressure.

Aerobatics take a toll on the body: The combination of negative and positive Gs makes a pilot tired, degrading performance. This flight lasted 0.7 hours, and I presented signs of fatigue that Tucker quickly called to my attention: decaying airspeed, a high pitch attitude, uncoordinated flight, and a low power setting. That after pulling negative 4Gs and positive 5Gs, nothing compared to the forces Tucker and other airshow performers withstand during a routine.

“The longer you fly, the more desensitized you get,” Tucker explained. “So that’s why aerobatic flights are normally 0.5 [hours].” Desensitized indeed. Near the end of the flight, I looked at the inclinometer to double-check my rudder coordination during level flight—it was deflected halfway to the left, so much that even a first-time flyer would be able to feel something wasn’t right. I couldn’t feel it at all.

To stay sharp, Tucker practices his airshow routine up to three times a day, twice in the aerobatic box at airshow altitudes: “I eat, live, breathe, and sleep airshow flying.” He does it in the name of safety. “On this level of flying, it’s all about risk management,” he added.

“Airshow flying is certainly serious business, and I really feel you can do it safely.”

He stressed that same level of safety on this introductory aerobatic flight, practicing positive exchange of the flight controls, clearing the area of traffic, and starting maneuvers at 5,000 feet agl for plenty of cushion. As an airshow performer, he sets the altimeter on his aircraft to zero before taxiing onto the runway so that he always knows his height above the ground.

While many of the aerobatic maneuvers teach coordination, they also play an important role in safety, a concept emphasized at the Tutima Academy of Aviation Safety in King City, Calif., where Tucker is president ( see “Confident in chaos,” June 2012 AOPA Pilot). For example, rolls also teach upset recovery. Spin recovery is another technique pilots are required to know for safe flight. Tucker set the Extra up in an inverted flat spin and counted five rotations before letting me recover.

None of my maneuvers were perfect, but, as Tucker pointed out, “we don’t learn this stuff overnight.” I’m sure Doolittle’s first outside loop wasn’t perfect either, even as the inventor of the maneuver. A true aerobatic pilot like Tucker is always learning, always working to improve: “I just love the challenge of aerobatic flying. I’ve dedicated my whole life to this, and I’m still learning. I’m still so infatuated with trying to do it correctly. It’s hard. To do it correctly all the time keeps you focused, keeps you challenged, keeps you with goals.”

My next goal? A second dance with Tucker—this time, trying out the moves he has invented. 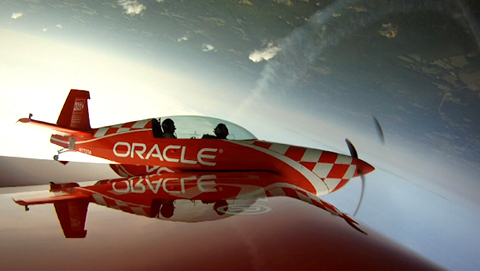