Get the app Get the app
Already a member? Please login below for an enhanced experience. Not a member? Join today
News & Media Kickstarter funds Synergy prototype 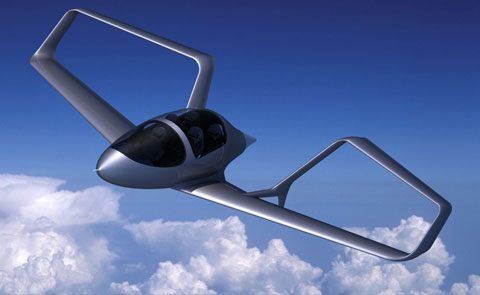 The concept design of a five-place aircraft that aims to shatter the present limits of GA efficiency helped designer John McGinnis raise more than $78,000—most from small donations—to finance a full-scale Synergy prototype.

Cut the fuel bill in half for a given horsepower; make it roomy; make it quiet; make it fast, easy to fly, and able to carry five people. Kalispell, Mont., designer John McGinnis has been hard at work—largely on his own—for five years on Synergy. For now, it is a scale model and an advanced concept design that blends a variety of drag-reduction technologies and techniques. In a matter of weeks, hundreds of Kickstarter donors have pledged an average of $119 to endorse, with $78,466 as of May 30, McGinnis’ stated vision. “To erase the artificial limits that make airplanes expensive, uncomfortable, and unwelcome,” reads the appeal on Kickstarter, a website created to “crowdsource” support for creativity in many fields.

McGinnis, in a telephone interview with AOPA, answered frankly an oft-asked question: When can one be had?

“You have to prove what it’s worth,” McGinnis said. “We’re not talking about what we’re going to have until we have it. A lot of people think this is a commercial effort—they’re getting way, way, way ahead of themselves. I’d like for everyone to know that this is just a science project at this moment in time.”

The funds raised through Kickstarter will allow McGinnis and a small team of family and friends to create a full-scale prototype. A larger team will be assembled after the planned public prototype demonstration and proof of concept, and only then does McGinnis plan to seek capital through more traditional channels to push Synergy toward the market.

While Synergy incorporates many new designs and concepts, the most obvious are the twin box tails that twist forward onto the wings, with a bullet-shaped fuselage that is 60 inches wide in the seating area. McGinnis believes he has a breakthrough on his hands that will significantly reduce drag, using both the airfoil design and a portion of the engine’s output. McGinnis aims to use a small fraction of energy from the engine to dramatically reduce, at the high end of the aircraft’s speed envelope, vortices of air caused by an airfoil’s production of lift. This is the source of induced drag, one of two main components of drag—the other being parasite drag, the product of friction between aircraft parts and the air they pass through.

Mark Moore, senior aerospace engineer at NASA Langley Research Center in Hampton, Va., whose work focuses on advanced concepts for general aviation aircraft and unmanned vehicles, had a chance to review McGinnis’ work in detail—Synergy was submitted for competition in the 2011 Green Flight Challenge.

Synergy did not come together in time for the competition, which spawned a wide range of creative designs and was Moore’s brainchild. McGinnis’ radical design was reminiscent of a project Moore worked on a decade ago—then with a box wing, instead of the box tail configuration, which produces a different set of results and challenges.

Moore described his reaction: “Oh, my gosh—this was an idea that I was trying to pursue.”

What stopped Moore a decade before was a combination of time and the sheer complexity of the problem. Without sophisticated wind tunnel tests and powerful computers able to model moving air in three dimensions—resources generally reserved for major corporations, universities, and government agencies—it will be difficult to tell what Synergy is really doing even after a full-scale prototype is built, Moore said.

The advantage of the box tail design, Moore said, is that that the tail produces down force, not lift, the mother of induced drag.

“You don’t shed a significant tip vortex,” Moore said, noting the tail produces virtually no induced drag until it reaches the fuselage, where the vortices fall in line with air already disturbed by the passing fuselage, and the spinning propeller at the rear. 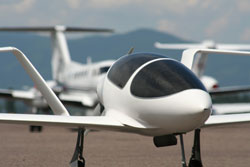 This quarter-scale model has helped spark interest in Synergy, though it will take a full-scale prototype to prove anything.

There are penalties to be paid, however: Moore said he isn’t sure the reduction in induced drag will offset the increase in parasite drag and weight that result from the box tail’s greater surface area and structure. (Moore emphasized that his opinions are his own, and not representative of NASA).

It is extremely difficult to compare the performance of the new design to traditional aircraft without sophisticated wind tunnels, computers, expertise, and time.

“The comparisons were so complex that I never even published a paper on it,” Moore said.

Still, the right tests may eventually prove McGinnis correct in his belief that there’s a huge opportunity that generations of designers have missed. Moore said he wholeheartedly supports the attempt.

McGinnis is confident that he can achieve significant performance gains, reduce noise, and solve central problems that have kept GA from being a more integrated—and widely used—part of the overall transportation system: lack of efficiency, noise, and high cost.

“What this is really all about is aiming at things that enable ordinary folks to have highly efficient airplanes that are comfortable to ride in,” McGinnis said.

While there are skeptics in the design community who challenge some of the core assumptions—Moore, for example, expects the box tail will prove more efficient at 100 knots than the 200 knots or more McGinnis hopes to deliver—YouTube videos of the radio-controlled model have drawn plenty of interest: 7,829 viewers for a 55-second clip of a flyby.

“Everyone who has ever seen this airplane has been impressed by it,” said McGinnnis, who enticed Kickstarter donations with coffee mugs, shirts, and the distant promise of a ride when Synergy comes to town.