Get the app Get the app
AOPA Members DO more LEARN more SAVE more - Get MORE out of being a pilot - CLICK HERE
News & Media 'Snoopy 1' travels country, visits DC area 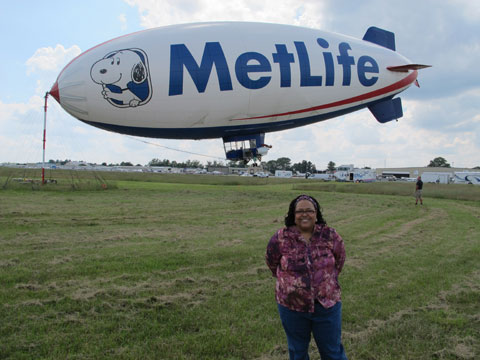 As I was driving to work last week, I saw the MetLife blimp floating in the breeze at Frederick Municipal Airport, where AOPA is headquartered in central Maryland. The blimp, Snoopy 1, was in town to cover the Preakness Stakes, the second leg of the Triple Crown.

But the weather at Frederick was rainy and foggy for most of the week, and the blimp remained. Finally on May 24, I sent a tweet (@MetLifeBlimp) saying I was across the street and asked to stop by for a visit. The person overseeing the blimp’s Twitter account answered immediately, and I walked across the street for a ride to the blimp. 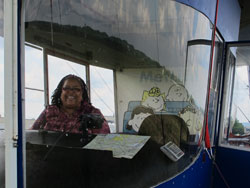 My host was Charlie Smith, the blimp’s pilot, who also happens to be an AOPA member. “Everyone who wants to become an airship pilot must be a commercial pilot with an instrument rating,” said Smith. “All the training is done on the job, because there is no flight instructor or training school to show you how do to it. The tricky part is finding pilots because there is so much travel. We’re all over the place, making it a nomadic experience. But traveling is great because you get to see so many wonderful cities.”

The blimp travels with a crew of 13, including the pilots, mechanics, and crew, along with three trailers that carry all the equipment. Snoopy 1 films PGA tournaments, football games, and horse races. Frederick Municipal is one of the two airports of choice to park the blimp when it is in the Washington, D.C.-Baltimore area, said Smith. 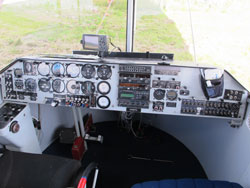 “When it’s time to land, we have to have the mast that holds the blimp set up first, because there’s no other way to anchor it down,” Smith explained. “We need a minimum of eight people to take off and land. Most days, the crew will get to the airport about an hour before we do so they can set up the equipment.”

The big difference between flying a blimp and an airplane is the lift, said Smith. “Our lift is the helium gas we have to maintain at all times. We have power with Rotax engines to get us in the air, but the helium gives us the lift to give us equal buoyancy in the air,” he said.

When taking off and landing, it’s done at very slow speeds, said Smith. “Our top cruising speed is 42 knots. We normally cruise at between 30 and 35 knots with no winds,” he added. “We do a gradual approach, pull engines into idle and manually control it on the ground. It takes about three minutes to land and latch onto the mast.” 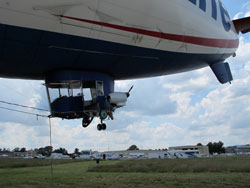 Looking at the cockpit, it’s not much different than an aircraft cockpit. “We’ve got all the standard instrumentation. We don’t have an aileron,” Smith said. “We have these two rudder pedals and also have wheels attached to each side of the pilot’s seat, which is our elevator. It looks like a wheelchair.”

It’s rare that the public can get rides in the blimp, said Smith. “We do a series of rides for the Believe in Tomorrow Foundation, which helps sick children. We also do media rides.”

The @MetLifeBlimp social media team is pretty quick about responding on Twitter, said Smith. “There are times we’re flying around towns doing general trips and someone will send a tweet asking if we can fly over a school or other location. We like to do this because it gets us out there and allows us to be more in touch with the public,” he said.