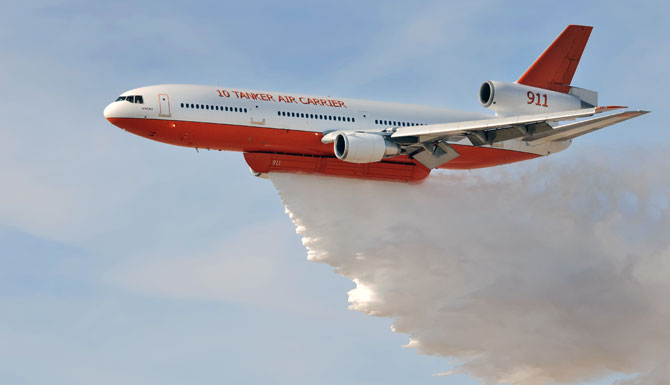 Jack Maxey pulls back on the three large throttles, and the 420,000-pound-MTOW Douglas DC–10 pitches over into a 3.5-degree descent, as stable as if it is following an ILS glideslope. The heavy jet is almost in landing configuration, with leading-edge slats extended and its massive flaps reaching 35 degrees into the slipstream.

But the landing gear remains retracted—and there’s not a runway in sight.

In a continual, stabilized descent at a steady 140 KIAS, the orange-and-white behemoth turns base, then final, aligned with a downhill-sloping ridgeline in Southern California’s high desert east of Victorville. The mountains look big—very big—through the windshield when the jet levels off about 300 feet above the ragged terrain. 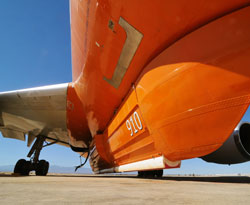 DC–10 tanker 911, nicknamed "Vicki" from a fire season spent in Australia, drops almost 6,000 gallons of water on a training flight. Attached to the bottom of the former airliner's fuselage are three modified Erickson tanks; an S–64 Aircrane would carry one.

Then, in eight seconds, the modified airliner sheds nearly 97,000 pounds as it drops 11,600 gallons of water in a precisely controlled stream; the three General Electric CF6 engines roar as the power comes up; and the tanker banks left, climbing as it turns back to Southern California Logistics Airport, the former George Air Force Base.

This flight is a practice mission for the three-man crew. It differs from a mission only in that no columns of smoke roil upward nearby (drops normally are in advance of a fire, not on the actual flames); the ride is smooth (heat from a fire sends massive amounts of air rising skyward, causing turbulence and even its own weather); and the liquid that fell from the airplane was white, not dyed red (retardant foam or gel is mixed with water so that it clings to foliage and other fuels longer; plain water evaporates quickly but some retardants can persist as long as 30 days).

How did this 37-year-old airliner, which once carried more than 250 passengers for Continental Airlines, end up flying low and slow over wildfires?

“Speed is of the essence in a fire,” explained Rick Hatton, president and CEO of 10 Tanker Air Carrier. “Getting there with enough—or more than enough—is the way to go. It’s called the first strike philosophy.”

And the concept can prevent fires from spreading. “It’s the big [fires] that get the attention, but there’s no such thing as a big fire that didn’t start as a small fire,” said the former Marine Corps F-4 Phantom pilot—and Lancair Legacy builder—who owns the company with two partners who have heavy-jet experience.

“The Station Fire is the most recent example,” Hatton said. When that fire started north of Los Angeles in 2009, it was considered a small fire—but it grew to encompass 164,000 acres. 10 Tanker was called in on day four, and flew 31 missions. “There were more dollars in unemployment claims as a result of that fire than there were dollars spent in suppression costs.”

Founded in 2002, the company began by conducting extensive research. “We tried to get a handle on what it would take to build a better mousetrap—and we learned a lot,” Hatton said. “We’re airplane people—we’re not historically fire people by any means.

“Essentially, you come over the fire at 3,000 feet agl, and you want to drop down to 200 agl without gaining any speed.” The preference is to drop with descending terrain. Aircraft performance was validated using United States Forest Service flight profiles that utilize a 7-degree glideslope. “Jack and I jumped into the sim to see if there was a way to get the DC–10 down under those conditions. There was,” Hatton explained. “You do that by going to a landing configuration, except that the landing gear is up.” Descent rates used in the field usually are shallower—but not always.

10 Tanker borrowed, and then bought, tank technology from Erickson Air-Crane. Three tanks, like those used by the S-64 Aircrane Helitanker—but strengthened and expanded—are mounted below the DC–10’s fuselage, providing a capacity of 11,600 gallons. Finite element modeling determined where the aircraft structure would bear the load of the tanks, and where strengthening would be required. After four years of work, the company received a multiuse supplemental type certificate that applies to all DC–10 models; airplanes retain their standard airworthiness certificates. 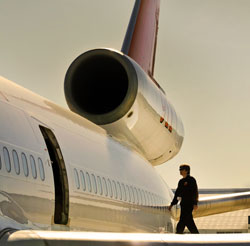 Boeing, which purchased DC–10 manufacturer McDonnell Douglas, was commissioned to create a maintenance and inspection program for the airframe in a tanker role. “You shorten inspection intervals, and put more of them on the calendar instead of cycles,” Hatton said.

The company also worked with the forest service’s Interagency Airtanker Board in Boise, Idaho, charged with approving new aerial firefighting technology. A grid test—which required 2,800 cups mounted on stakes—precisely determined delivery rates in gallons per 100 square feet. Both of the company’s DC–10s have full operational approval that must be renewed after six years.

The two converted airliners operate primarily under Part 91 of the federal aviation regulations—except when they’re on firefighting missions, when they operate under Part 137 (agricultural aircraft operations). “It allows you to drop things from airplanes, and it provides a waiver to required distances from things,” Hatton explained. “We choose voluntarily to emulate Part 121 with our training, operations, and maintenance.” Twice a year, flight crews train in a Level C simulator, with an emphasis on IFR work. “In this business you don’t fly very much,” he added.

Hatton is very pleased with the company’s results so far. “We have flown over 420 fire missions on over 70 named fires, in six states and two foreign countries, and without exception the professionals who requested, dispatched, and guided these events were impressed with our delivery.”

Keys to that success are the fact that the load is carried externally; it’s delivered by gravity flow, not under pressure; and coverage is computer-controlled through constant-flow doors. “If you have a given flow rate at a given altitude, airspeed, and wind, it’s just math to determine coverage level,” he said. Dropping retardant ahead of a fire, the airplane can create a fire break up to three-quarters of a mile long and more than 50 feet wide. 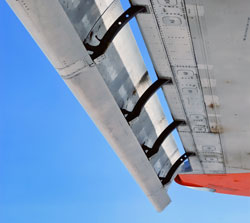 The average mission to date is one hour, four minutes long; the tanker can reload on the ground in as few as eight minutes. A Beech King Air serves as lead plane, guiding the tanker to the specific drop location; instructions include the coverage level for the retardant, which is adjusted from inside the cockpit. The tanker can drop all 11,600 gallons in one pass or make a series of smaller drops.

As a tanker, while the DC–10 is more expensive to operate than smaller tankers, “it basically does the work of four airplanes, for the price of two,” Hatton said.

So far, 10 Tanker has been operating under “call when needed” contracts—there’s no guaranteed usage, but the company will respond within 24 hours of a call if aircraft are available. The company would prefer an exclusive use contract, under which it’s paid a fee to be on call over a specified period; it then bills a much lower hourly operating cost, and crews on standby will launch within 25 minutes of a call.

However, the privately funded company is not likely to convert additional aircraft without a multiyear exclusive-use contract. “A fleet of DC–10s would significantly enhance and easily integrate into any future USFS fleet scenario,” Hatton said. 10 Tanker has identified airframes for future conversion, a process that takes about six months, and has an extensive inventory of spare parts and components.

“If used properly, [exclusive use] costs the government less to get the job done,” he said; the cost per gallon of suppressant delivered is significantly lower, and high volume combined with short turnarounds can put more suppressant on a fire quickly—from an orange-and-white DC–10, 200 to 500 feet overhead. 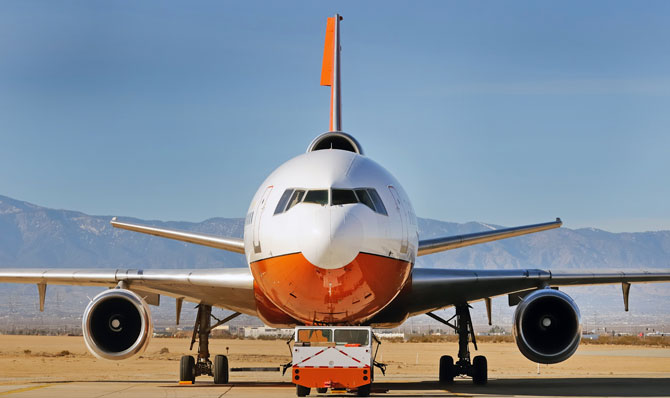 As the chief supervisory pilot for 10 Tanker since its inception, Jack Maxey has done things most pilots will never have the opportunity to do—and his exposure to test flight and certification was very rewarding.

Maxey, who has logged more than 13,000 hours, was chief pilot for Omni Air International when it was an all-DC–10 operation; he was a DC–8 captain for Air Transport International; and he’s worked for other airlines.

“It takes a certain kind of person to do this kind of flying,” he said. It has benefits: “The airplane doesn’t know if you’re flying in Levis or not.” (Nomex flight suits are a contract requirement while on fire missions.)

VFR skills are critical. “Ninety percent of what we do is VFR, daylight, hands-on flying,” Maxey explained. “With the guys we’ve brought in, it’s sometimes been a challenge to get them back to their Cessna 150, VFR-chart days.”

Good planning keeps you out of most of the smoke, he added. Columns of boiling smoke are extremely turbulent—and you must remain in visual conditions to follow your King Air lead plane, which is about 1,000 feet ahead of you. —MPC

Staying out of the way

Fire season tends to start in the Southeast in the spring, typically migrates to the Northwest by June, then down the California coast in August. “But these are dangerous assumptions because of climate change and drought,” said Rick Hatton, president and CEO of 10 Tanker.

Large brushfires and wildfires often receive temporary flight restrictions, disseminated by notam like other TFRs. Major fires pose a very real danger of collision with air tankers, lead airplanes, and helicopters operating in and near TFR airspace. In addition, smoke and haze from a fire can reduce visibility—sometimes far from the actual flames—and heat from the fire can cause updrafts, downdrafts, and turbulence.

A fire traffic area, the initial attack airspace structure over a wildfire, typically extends to a 12-nautical-mile radius, extending from the surface to 2,500 feet agl. 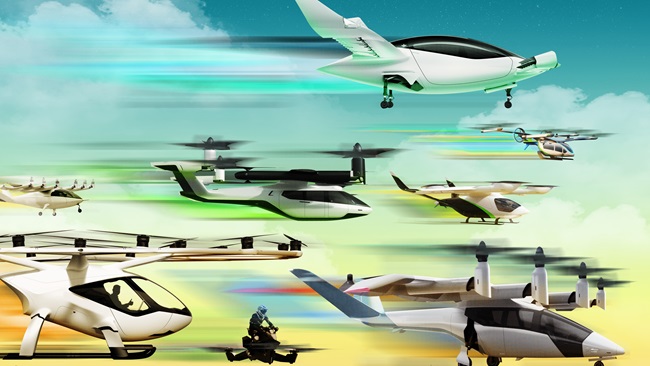