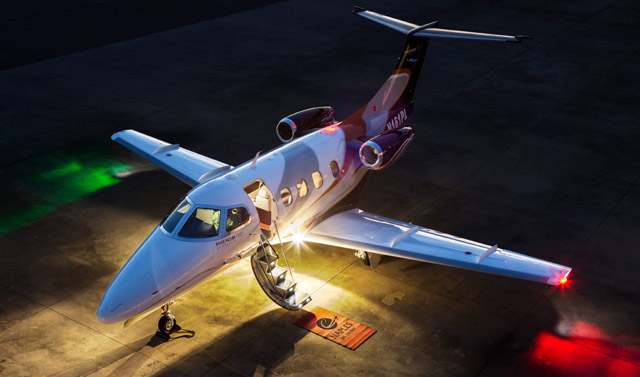 When the Phenom 100 was announced in May 2005 it caused a fair amount of excitement. It was a clean-sheet design from a company that previously focused on producing airliners, plus a sole business jet—the large-cabin Legacy 600. What would be Embraer’s idea of a small business jet?

For one, the cockpit features an avionics suite dubbed Prodigy, based on Garmin’s popular G1000. The Phenom’s three-screen setup includes a keypad for data entry, and the entire panel has a clean, uncluttered look that reflects design goals aimed at reducing workload. Anybody with G1000 experience will have little difficulty learning the Prodigy’s knobology, something Embraer knew would appeal to step-up turbine pilots with backgrounds using Garmin equipment. 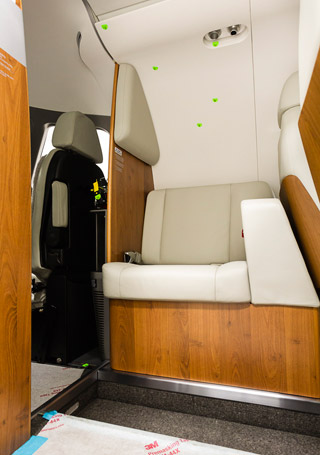 New for 2013 will be an optional side-facing seat across from the cabin entry door, as seen in a photo taken at the new Melbourne assembly facility.

Both the Phenom 100 and its big brother, the Phenom 300, are very much computerized airplanes, loaded with all sorts of sensors, processors, and diagnostic features. The idea is to use the latest digital technology to make the airplane safer to fly and easier to maintain. Some in the industry have taken to calling the Phenoms “computers with wings.”

With an advertised maximum cruise speed of 390 knots, a maximum range of 1,178 nm, and a max operating altitude of 41,000 feet, the Phenom 100 promised performance similar to that of the Mustang’s—but with a stronger ramp presence, larger cabin dimensions, and an aft flushing lavatory. It also has a bigger price tag, which is now up to $4.1 million.

Now that a few years have passed it’s time to look over the Phenom 100 experience. Has the airplane lived up to its promise?

Perhaps the biggest complaints about earlier versions of the Phenom 100 centered on the brakes. Simply put, they were grabby. And powerful, being designed for maximum braking. Pilots didn’t like the way the airplane lurched while taxiing, and couldn’t smoothly modulate braking. After landing, more problems would crop up. It was either maximum braking, swerving, or no braking if a pilot pumped the brakes in the conventional manner. The trouble here was that the digital, brake-by-wire brake control unit (BCU) would reset each time the pilot let off on the brakes, and it would be a critical microsecond or so before braking was again available. So some pilots, sensing an apparent loss of braking during the momentary reset time, kept pumping the brakes, only to experience another “loss” of braking. Meanwhile, the airplane stormed down the runway (Phenoms have no reverse thrust). Some pilots felt the brakes had failed completely, applied the emergency/parking brake, and blew the tires. Some simply ran off the end of the runway. This problem was fixed by software upgrades to the transmitters in the brake control units, giving the pedal assembly a longer pedal throw, and installing less powerful return springs. Essentially, the brake system is now more like that of the much friendlier Phenom 300’s. Now brake pressures are more linear, and braking is much more conventional in feel. The brake fix is available free of charge as a retrofit item. The current BCU fix is the fifth iteration, and everyone appears to be happy with the fix. 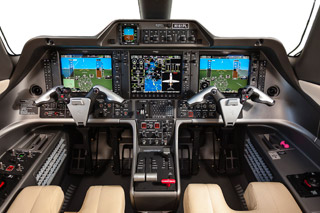 Then there were the “brake fail” annunciations. Usually, these happened because the system was extra-sensitive, and designed to sample voltage and pressure spikes and other anomalies so frequently—as often as 60 times per second—that minor transient fluctuations fooled the system into thinking that the brakes had truly failed. The drill was to pull the flap circuit breaker to reset the system and clear any faults, wait, then push it back in. Usually, the message went away. The new BCU has so far solved the problem.

Another software-related issue had to do with the flap system. The system assumes that after shutdown the flaps would be put in the full up position. If the flap handle was moved to a flaps-down position while the airplane was depowered, pilots would get a “flap fail” message when they next turned on the battery masters. The Phenom flap system computer is always looking for signs of flap asymmetry, and powering up with flaps down would trigger a false alarm. A new flap control unit was developed and installed in the entire fleet by mid-2011, and the problem went away.

The aft-cabin cooling fans were too loud, so a redesign that halved the fan speed dialed down the noise.

Early Phenom 100 bleed air pressure-regulating and shutoff valves (PRSOVs) would sometimes give false messages, saying that the valves were closed when they really were open. This problem was solved by modifying the PRSOVs’ electric switch monitoring system.

Having only one cabin seating option grated on some customers. That the seats were too wide and didn’t articulate or swivel was another issue. Now Embraer offers a side-facing forward seat opposite the cabin entry door (a $53,302 option) and a belted lavatory seat ($48,334). Together that makes for a total of eight seats. To raise payload, a 330-pound increase in maximum zero fuel weight ($15,000) also will be made available. Also, in a big move, Phenom 100s will have articulating and swiveling seats starting in mid-2013; essentially, these are the seats used in the Phenom 300. Because structural changes are involved, the new seats will not be retrofittable to earlier Phenom 100s. 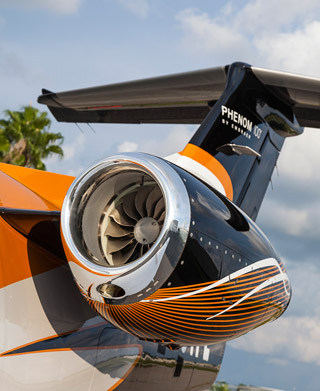 The 1,695 lbst Pratt & Whitney PW617 engines can go to 1,820 lbst under its automatic power reserve (APR) mode in emergencies such as an engine failure after takeoff.

According to NTSB records, Phenom 100s have been involved in just three accidents as of mid-2012. All involve braking issues, which led to runway overruns. A September 10, 2010, accident at Brenham Municipal Airport in Brenham, Texas, happened after the pilot received a “brake fail” warning after a takeoff from Tucson, Arizona. During the landing at Brenham Municipal the pilot reported “zero braking,” applied the emergency brake, blew both tires, and then ran off the side of the runway. No one was injured.

During a landing at the Sedona, Arizona, airport on May 25, 2011, a Phenom 100 ran off the end of Runway 21, which has a downhill slope; hit a fence; and went down an embankment. Witnesses saw the airplane fishtailing at high speed as it went down the runway. Two on board received serious injuries, but three others were uninjured.

On February 3, 2012, an “anti-skid brake failure” during a landing roll at the Campo Grande, Brazil, airport caused a Phenom 100’s tire to rupture, but the pilot and two passengers were not injured.

Pilot feedback. So much for the bad news—which is not bad at all in the grand scheme of things. Especially when you consider that Embraer has a warranty that covers everything—even brakes, tires, and scheduled and unscheduled maintenance—for five years. Add Pratt & Whitney’s Eagle Service Plan (ESP) engine warranty plan, and you’re covered for everything that wears out or breaks.

Owners love the airplane. Dr. Michael Alper of Boston says that his Phenom 100 is comfortable and quiet and that Embraer’s support has been “unbelievable.” He uses his airplane to fly for business and pleasure, mostly across New England and to Canada and back. “I always wanted a jet,” he said. “And this one’s been phenomenal, pun intended. Yes, there have been growing pains, but Embraer always covered the expenses.” 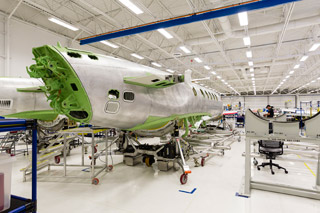 Jay Obernolte keeps his Phenom 100 at the Big Bear airport in Southern California. “It’s a fantastic airplane,” he said. “It doesn’t look like an entry-level jet. It looks like a real jet, and I catch myself looking back at it before I close the hangar doors.” Obernolte plans for 360 knots when flying near the airplane’s maximum operating altitude of FL410, but says he can get 390 knots when flying in the low thirties. “It’s a great weather airplane, too,” Obernolte said. “It’s good in ice, and that small wing handles turbulence very well. It’s also easy to land.

“If there are any shortcomings I’d say it was the airplane’s contaminated-runway performance. Without any speed brakes, spoilers, or reverse thrust, stopping distances are really dramatically lengthened. Payload/range trade-off is another issue. With full fuel I only have 600 pounds of useful load; with the cabin full, I can only fly an hour. But that’s a light-jet thing anyway. All light jets have compromised payload.”

Dr. Tiron Pechet of Bedford, Massachusetts, said, “What’s not to like about the airplane? It’s a joy to fly and it’s nearly impossible to make anything less than perfect landings. It’s well set up for single-pilot flying, although you have to develop a different way of thinking about pilot workload.

“By that I mean it’s better. Before, when I flew a Citation I was all over the panel and doing all sorts of arithmetic for descent planning, for example. With the Phenom’s Prodigy panel, moving maps, and the FADEC-controlled engines, my workload is down. Now I can devote my attention to situational awareness and planning ahead.

“Embraer’s approach to maintenance took some getting used to. With the Citation I had a guy who did my radios, another guy for the engines, and so on. With Embraer I have a single point of contact. One time I landed and had three CAS [crew alerting system] annunciations. I did a download from the airplane’s CMC [central maintenance computer] and sent it to Embraer service representatives in Brazil. Before I could even get a rental car, they were towing the airplane into the hangar for repairs. All the problems were fixed that evening.”

Embraer’s background making airliners has driven its business-jet design, manufacturing, and maintenance philosophies. This approach, and the string of improvements over the years, have built customer loyalty. Soon, the tradition will be extended with the introduction of Embraer’s Legacy 500 and Legacy 450 midsize and “mid-light” jets, respectively. First flight of the Legacy 500 should happen before year-end. Before long, Embraer will have a full line of business jets. If they’re all as successful as the Phenom 100, and the economy’s anticipated upswing comes about, the company is in for a good ride. 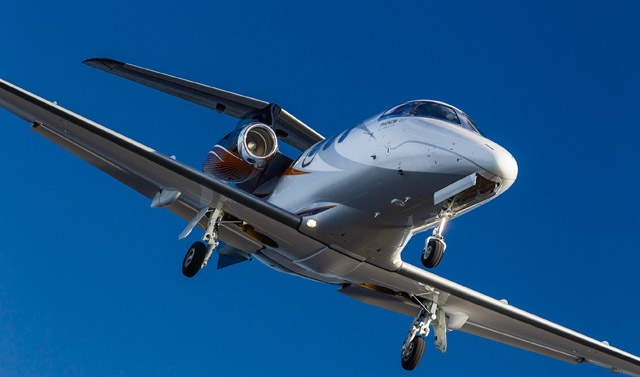