Get the app Get the app
Already a member? Please login below for an enhanced experience. Not a member? Join today
News & Media Never Again: Lights in the night sky

What is that - really? 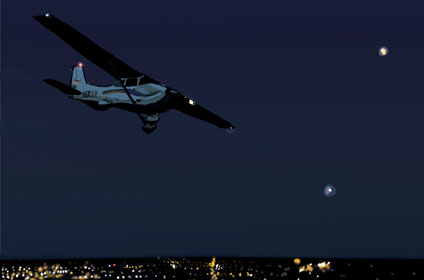 Listen to this month's "Never Again" story: Lights in the night sky. Download the mp3 file or download the iTunes podcast.

It’s not unusual for a pilot who flies regularly at night to suffer an optical illusion concerning lights. The most common one is seeing Venus low on the horizon and thinking that it is an oncoming landing light. There is an infinite variety of other visual traps. I have had two experiences, one as a pilot, and one as an air traffic controller.

It was back in the 1980s. I was working at the Houston Air Route Traffic Control Center. At night it is common practice to combine all positions into one, rather than staff empty sectors. On this night I was responsible for an area that would normally encompass seven different sectors during the day. I was alone, monitoring all the frequencies for those sectors.

I had two aircraft on my radar scope. One was an airliner climbing out of Houston on his way to Mexico City. The other was a military C–130 on a nearly reciprocal heading, about 100 miles away from the airliner. The two aircraft were on different frequencies. The airliner called on the radio and asked if I had any targets in his vicinity. I already knew I had no pertinent IFR traffic. I did a quick scan for any other transponder or primary (nontransponder) targets. Except for the two aircraft I was working, the scope was blank. I told the pilot so.

“Well, Center,” he responded, “I’m not sure I should be telling you this, but there is a light in our one o’clock position, a couple of miles out. It seems to be maintaining the same relative position.”

The pilot never actually said “UFO,” but it was clear that was what he was implying. I did another scan and assured the pilot that nothing was painting on radar. I told him to advise me of any changes. I briefly considered the C–130, but initially dismissed it because the airline pilot was so confident that the object was close. After about a minute I keyed up the frequency.

At this point I began to think again about the C–130, and a slightly mischievous plan popped into my head. I reached up and turned off the transmitter for the frequency the airliner was on, and then called the C–130. “Air Force One-Two-Three-Four, do you have your landing lights on?”

“Air Force One-Two-Three-Four, could you flash those lights on and off for me?”

Two seconds later the airliner transmitted again. Until this point the pilot had been using that gravelly Chuck Yeager kind of voice that many professional pilots effect. This time he was clearly excited. “Center! The light…it’s pulsating!”

This was an experienced airline crew. If they could be fooled by distant lights, any of us could be.

The second experience goes back to the 1970s when I was a full-time charter pilot. I was on a VFR long cross-country flight in a Piper Lance. The controller called traffic, three miles ahead, a Cessna 172, same direction, same altitude. “You are rapidly overtaking him,” the controller added. I looked ahead and saw a single white light, the tail navigation light. I did not realize—or maybe just didn’t consider—the fact that red and green wingtip lights are generally not visible from directly astern.

“Traffic in sight,” I answered.

I was not concerned. The other airplane was pretty far out. I would keep an eye on him, of course, but experience had taught me that in most cases, even when it appears that tracks are identical, one airplane or the other will eventually diverge.

After a minute or two the controller called back. “Traffic now 12 o’clock, a mile and a half. Verify you still have him in sight?” The weather was clear and a million. Of course I did.

“Traffic in sight, I answered, slightly annoyed. The relative position of the light in front of me had not changed.

Another minute went by, and the controller called again. “Traffic one half-mile. Sir, on my radar, your targets are going to merge.”

I had the light clearly in sight still some distance away. Did this guy want to reach in and fly the airplane for me? “Traffic in sight.”

But the controller’s urgency planted a seed of doubt. After another few seconds I decided to listen to that little inner voice that we all should learn not to ignore. That voice was saying “something is not right.” I turned 15 degrees to the right, just to be sure. Almost immediately the light assumed some aspect change. Within seconds it flashed by me on the left side. I felt cold, clutching fear as how close to a midair I had just come sunk in.

I had never realized before how much the human brain relies on perspective to measure size and movement. Had I been watching two lights instead of one, say the tail navigation light and the green light on the right wing tip, my brain would have registered the fact that the two lights were drawing apart much sooner than I did. With only one light there was no way to judge distance or closing speed.

I won’t make this particular error again. A corollary to the lesson learned might be to pay attention when a controller seems to be trying to tell you something. Most controllers are not pilots and often don’t have a clear understanding of how things are aloft, but they have access to information that we don’t: radar and a much better view of the big picture.

Nighttime is a magical time to fly: generally smooth, less traffic, and on clear nights a beautiful vista of stars and surface lights. But keep your wits about you when you see things that can’t be explained or don’t seem right. It’s easy to get fooled.

Robert I. Snow began flying in 1968. He flew professionally in the 1970s, and then served 25 years as an air traffic controller at Houston Center.