Get the app Get the app
AOPA will be closing at 1:45pm ET on Tuesday, December 6th. We will reopen Wednesday morning at 8:30am ET.
AOPA Members DO more LEARN more SAVE more - Get MORE out of being a pilot - CLICK HERE
News & Media Pilot Briefing 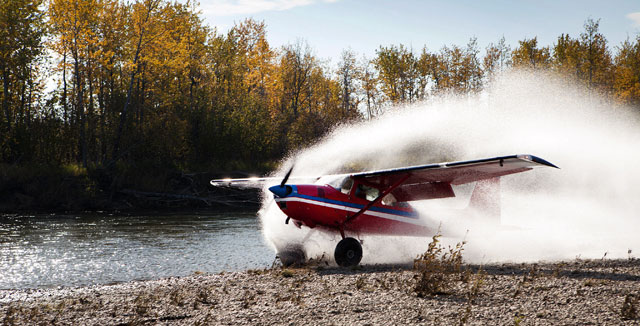 You’ll be able to talk to these pilots in person at AOPA Aviation Summit in Palm Springs, Calif., October 11 through 13. They will be available each day of the show from 10:30 a.m. to 11:30 a.m. during the “Ask the CFI” Roundtable for students to ask the Alaskan pilots questions about careers in aviation.

Who better to host “Adventures in Flying” talks than the pilots other pilots live vicariously through as they fly over some of the most beautiful yet treacherous terrain in the United States? The talks will take place October 11 at 12 p.m. and October 13 at 2:30 p.m. at the East Lawn Community Area outside the Palm Springs Convention Center.

Don’t miss the opportunity to talk to the featured pilots on the Discovery Channel’s Flying Wild Alaska. For more information visit the website.

AOPA’s newest media offering—a weekly web TV show, AOPA Live This Week—is now easily accessible anytime you’d like to watch, including on Roku. Simply sign up for the AOPA Live This Week newsletter and you’ll have access to the weekly shows as well as archives of past presentations. Hosted by AOPA Editor in Chief Tom Haines, AOPA Live This Week features the latest general aviation news, industry and personality profiles, and travel and human interest feature stories from the aviation experts of AOPA Pilot, Flight Training, AOPA ePilot, and AOPA.org. 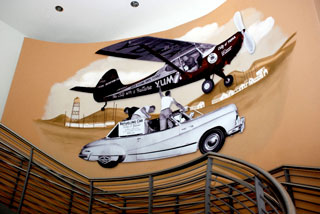 How about a nice 1,124-hour flight that goes anywhere you want, as long as you stay within fuel range of Yuma, Arizona? That’s what Bob Woodhouse and Woody Jongeward did in a 47-day flight in an Aeronca 15AC Sedan ending October 10, 1949. It demonstrated that Yuma has good flying weather year-round, and two years later helped to convince the military to reopen what is now Marine Corps Air Station Yuma.

The Aeronca was found in Minnesota in the late 1990s; brought back to Yuma, where it was restored; and is installed in the Yuma city hall—along with a mural depicting the transfer of gas cans from a Buick to the airplane. The permanent display is to be dedicated October 10, 2012.

Pumps in the airplane allowed the men to transfer fuel from milk cans—once they were handed up from a car—to the fuel tanks, and to pump new oil to the engine every 100 hours. A failed magneto finally ended the flight. Their record inspired the Hacienda Hotel of Las Vegas to attempt to break it. The Yuma record was broken in 1959 by a Cessna 172 that had taken off from Las Vegas in December 1958 and landed there in February. It was flown by Robert Timm and John Cook (see “Endurance Test, Circa 1958,” March 2008 AOPA Pilot). —Alton K. Marsh

AOPA has tapped Adam Smith as senior vice president to lead the Center to Advance the Pilot Community. The center will strive to stop the decline in the number of certificated pilots in the United States and seek ways to stimulate growth. 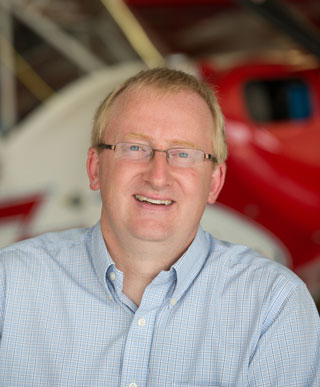 “Adam’s experience and leadership qualities make him the ideal person to guide the center as it brings together a whole range of programs designed to grow and support the pilot population,” said AOPA President Craig Fuller.

Some of the center’s work has already begun with a focus on helping student pilots complete their training through the Flight Training Student Retention Initiative. It recognizes successful training programs with the Flight Training Excellence Awards and supports students with customized information through the My Flight Training website. AOPA has also begun research into successful pilot communities to help aviation enthusiasts create environments that get pilots flying and keep them flying. All of these efforts have been based on extensive research, which will continue to be an important part of the center’s activities.

“What we have learned so far gives us hope for the future and has been the impetus behind the creation of the center,” said Fuller. “We see a future that includes a more robust pilot community in which more people earn pilot certificates, pilots are more active, and the flying lifetime of pilots is extended.”

Just as American Olympic athletes were scooping up gold (lots of it), silver, and bronze medals in London, the Martian spaceship (or SUV) Curiosity got a perfect score for sticking its landing on the red planet. The NASA and industrial team that launched it was no less happy than the families and coaches of the athletes. 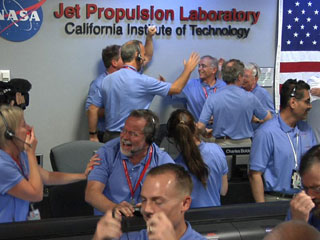 Cleared to final approach by distant controllers powerless to intervene from that moment on, the Mars Science Laboratory capsule cradling Curiosity endured a perilous descent through a very thin atmosphere and safely deposited its cargo—the product of a $2.6 billion effort—on the surface of Mars August 5 (PDT).

“Today, the wheels of Curiosity have begun to blaze the trail for human footprints on Mars. Curiosity, the most sophisticated rover ever built, is now on the surface of the Red Planet, where it will seek to answer age-old questions about whether life ever existed on Mars—or if the planet can sustain life in the future,” said NASA Administrator Charles Bolden. “This is an amazing achievement, made possible by a team of scientists and engineers from around the world and led by the extraordinary men and women of NASA and our Jet Propulsion Laboratory.”

Communication with Earth was largely cut off during the seven-minute descent from entry into the Martian atmosphere. Curiosity, so far away that radio waves need 14 minutes to make the trip, broadcast simple tones—a heartbeat—to signal all was well.

A parachute deployed (and was captured by an orbiting camera) to further slow Curiosity, while the final descent required a rocket-powered sky crane that dangled the car-sized rover below, keeping the rockets high enough from the surface to avoid creating a massive dust cloud, and deposited it gently on a gravel field near Mount Sharp. —James Moore

Remains of the departed can circle the Earth forever under a new service called Aerial Tribute based in Boulder, Colorado, that offers a slightly different approach to spreading ashes from an aircraft.

Company founder Marc Arnold developed new technology to release remains quickly in a “puff” from his Stemme S10-VT glider while circling in strong thermals above 14,000 feet generated by the Rocky Mountains.

“The [remains] outclimb the sailplane, typically at more than 1,000 feet per minute, as the plane continues circling in the thermal,” Arnold said. “We would not claim that all the ashes remain airborne forever, yet some of the finest particles certainly ride the updraft through the tropopause and into the upper altitudes. These particles ultimately circulate indefinitely along with naturally occurring atmospheric dust.”

He noted that some of the ashes become part of the Earth’s atmosphere.

Costs range from $600 to $1,000. A video is made of the release, and options include music added to the video later, and the inclusion of messages from mourners written on biodegradable rice paper. —Alton K. Marsh 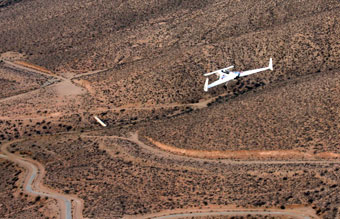 Would you believe a newly minted private pilot passed his checkride in a Cessna 172 and flew a single-seat electric airplane he had never seen before at 202 mph nine days later? How about losing the motor and making an emergency landing at Inyokern Airport in California? Trust me, it happened, and is going to keep happening.

Chip Yates, a mechanical engineer who raced motorcycles until he broke his pelvis, went 200 mph on an electric motorcycle. By the way, he says he has broken many bones but never a major one. (Chip, read the part above about your pelvis.)

Then he took the same electric drive mechanism, powered by lithium ion batteries; put it in a Long-EZ; and went 202 mph. (He had previous experience in a friend’s Long-EZ.) By the time you read this he will have attempted an official speed record going even faster—like 230 mph. He has altitude records in mind, too.

But wait, there’s more. His flightofthecentury.com project will have him flying a second electric aircraft across the Atlantic Ocean, refueled by little battery drones. The dead battery drones will drop off and either plop into the ocean or glide on wings back to a support ship, while a new drone plugs in, so to speak.

Yates has done everything he said he would do so far. Better watch this guy. —Alton K. Marsh

When is a blimp not a blimp?

For years people have referred to nearly all blimps as the Goodyear blimp, even when they weren’t, to the consternation of other blimp sponsors. Now, Goodyear is swapping out its blimp fleet for Zeppelins. 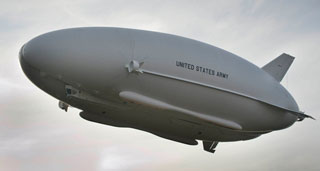 The age of the blimp, which is to say the age of the nonrigid airship carrying Goodyear colors, is about to end. Goodyear has rekindled an old partnership with the German company ZLT Zeppelin Luftschifftechnik GmbH & Co., one that began in the 1920s and ended with the start of World War II.

Together, the companies will produce—in Akron, Ohio—a set of replacements for the old blimps, Zeppelin NT airships with semi-rigid frames. Testing will begin in 2013.

The pilots will no longer rely on ground crews to capture them or fling them skyward: A Zeppelin NT, with rotating engines mounted high above the canopy on the airship’s semi-rigid frame, will vector thrust where it is needed. The new airships will be able to launch and land like a helicopter, controlled with a fly-by-wire side stick in a cockpit more reminiscent of a regional jet.

What should we call the Goodyear Zeppelin? The Goodyear blimp, of course. Only aviators will know the truth. —James Moore

Citation Ten gets a speed boost to Mach 0.935

Cessna engineers have found a way to boost the speed of the Citation Ten, the follow-on to the Mach 0.92 Citation X, from Mach 0.92 to Mach 0.935. That beats the Gulfstream 650, once the fastest business jet in the world, which flew at Mach 0.925. The Ten is also 15 inches longer than the Citation X.

It will be interesting to see if the announcement sends Gulfstream engineers back to the drawing boards to find a little more speed to regain the title of fastest business jet. To brand the Ten as a speed demon, Cessna officials have announced sponsorship of the Chip Ganassi Grand Prix racing team. The Cessna name will appear on all four race cars of the team, driven by some of the highest profile race car drivers in the world: Dario Franchitti, husband to movie star Ashley Judd; Graham Rahal; Scott Dixon; and Charlie Kimball.

“As our founder Clyde Cessna said, ‘speed is the only reason for flying,’ so at Cessna we design, engineer, manufacture, and fly the fastest civil aircraft in the world—not for us, but for our customers so they can work faster, more efficiently, and get the job done,” said Scott Ernest, Cessna president and CEO.

It appears, however, that the speed boost is all about bragging rights. Cessna mentioned the title of “fastest civil aircraft in the world” in the opening line of its press release, demonstrating the value it places on speed as a marketing tool.

The announcement came a few days after Cessna said it has increased the range of its planned midsize jet, the Citation Latitude, from 2,000 nautical miles to 2,500 nm. —Alton K. Marsh