Get the app Get the app
AOPA Members DO more LEARN more SAVE more - Get MORE out of being a pilot - CLICK HERE
News & Media Pilots: Adrian Eichhorn 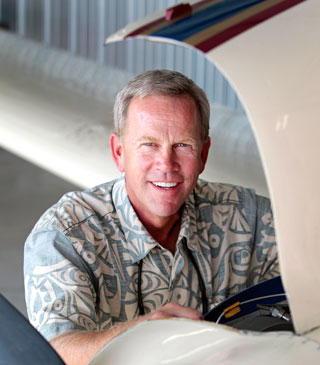 His 1,000-watt smile indicates that the boy who always wanted to be an airline pilot has gotten just what he wanted out of life. Oh, there have been a few roadblocks along his path, but Adrian Eichhorn is comfortably happy as a JetBlue Airways pilot and passionate preacher of all things Beechcraft—Bonanzas and Barons, anyway. It was not always this way. In the Army he became a civil engineer instead of the helicopter pilot he wanted to be and didn’t get to solo in an aircraft until he was 29. And he stayed in the Army longer than planned because his assignments “kept getting interesting.” He was the nuclear advisor to President Bill Clinton: “I would have been the guy to tell the president what to do in case of a nuclear attack.”

When he retired from the Army things got even more interesting—his first job as a pilot was as a corporate pilot for the Washington Redskins. And then he flew for the FAA. “That was the experience of a lifetime,” he says. Remember the case of convicted murderer Neil Entwistle? Eichhorn was the pilot flying Entwistle back to the United States. “My mom saw me on Nancy Grace,” he grins. But life as a VIP transport pilot took its toll and he jumped at the chance to fly for JetBlue. No more beepers.

Along the way, Eichhorn became a Bonanza owner. Always an engineer, he enjoys discovering what makes things work. And he enjoys helping others. “The more you know about your aircraft, the better pilot you will be,” he says. “No one is taught how to be an owner.” Since 1992 he has been teaching Bonanza and Baron owner-maintenance clinics around the country and assisting in owner-assisted annual inspections. “I’ve seen Bonanzas from all over the country and seen everything that can be wrong with an airplane. And I love to help educate the owner.”