Get the app Get the app
Already a member? Please login below for an enhanced experience. Not a member? Join today
News & Media Baumgartner free fall reaches Mach 1.24 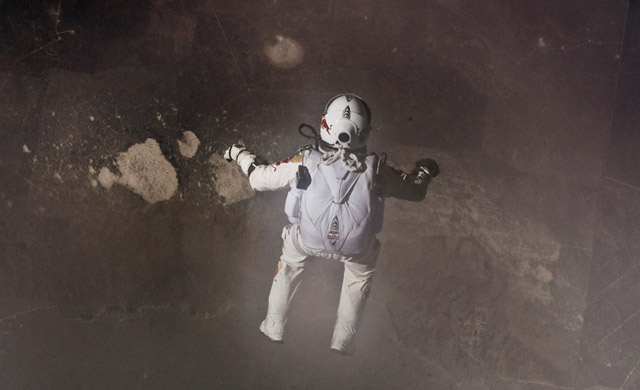 Felix Baumgartner, captured by a camera on the Red Bull Stratos capsule, begins to accelerate to Mach 1.24 as he skydives from the edge of space Oct. 14. Photo courtesy Red Bull Stratos.

Felix Baumgartner hopped from a capsule dangling at the edge of space and into history Oct. 14, falling from 128,100 feet and breaking the speed of sound.

Baumgartner, 43, an Austrian daredevil sponsored by energy drink maker Red Bull, paused for a few seconds at the capsule door, his words garbled by radio static but later repeated:

“I know the whole world is watching, and I wish the whole world could see what I see,” Baumgartner said. “Sometimes you have to go up really high to understand how small you really are.”

Red Bull Stratos assembled a team of 300 engineers, scientists, and specialists who supported the flight, including the man whose records for highest jump and fastest fall were shattered: retired U.S. Air Force Col. Joe Kittinger, who was Baumgartner’s radio contact in mission control, a baritone voice that helped keep Baumgartner focused on the task. While official results are still pending, a representative of the international record sanctioning body Fédération Aéronautique Internationale, told the New York Times that there is no doubt Baumgartner set records: an independent assessment of data collected during the jump pinned Baumgartner’s top speed at Mach 1.24; the ascent to the edge of space was also history’s highest manned balloon flight. The final numbers may change slightly following extensive analysis. 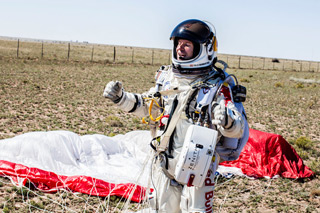 Baumgartner nearly spun out of control, picking up speed fast in a near vacuum, he managed to stabilize the descent without deploying a drogue chute that would have reduced his speed. The drogue chute was designed to deploy automatically in case Baumgartner lost consciousness, as Kittinger had during one of his Air Force test jumps.

“I thought I'd just spin a few times and that would be that, but then I started to speed up,” Baumgartner said in a statement released by Red Bull Stratos. “It was really brutal at times. I thought for a few seconds that I'd lose consciousness.”

The heater on Baumgartner’s facemask failed during the ascent, causing it to fog up and prompting discussion on the ground about an abort—returning Baumgartner to terra firma under the capsule’s recovery parachute. “Fearless Felix,” as he has been dubbed by fans, would have none of that. As the ascent continued, he made plans to jump blind.

The facemask cleared in time for Baumgartner to take a good look below as he exited the capsule, though the fog returned on the way down.

Kittinger, 84, will retain one record from his own efforts in 1960: the longest duration free fall. Baumgartner, thanks to much higher speed generated by the higher jump, pulled the ripcord after a four-minute, 20-second free fall, about 15 seconds sooner than Kittinger had.

Red Bull Stratos hopes that the attention-getting effort (millions watched online, and the jump was broadcast live by The Discovery Channel) will also have a scientific payoff, yielding data that will guide engineers devising systems to allow emergency exits from spacecraft.