Get the app Get the app
Get the latest news on coronavirus impacts on general aviation, including what AOPA is doing to protect GA, event cancellations, advice for pilots to protect themselves, and more. Read More
Already a member? Please login below for an enhanced experience. Not a member? Join today
News & Media iPad 101: 5 tips for the novice 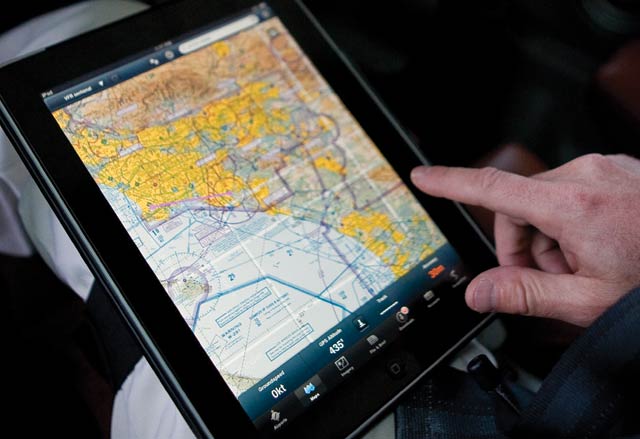 Is the iPad a legal replacement for paper charts?

“The answer is yes! … Asterisk,” said Sporty’s Vice President John Zimmerman in the seminar “iPad 101,” at AOPA Aviation Summit Oct. 11. For normal Part 91 operations, pilots can use the popular tablet in lieu of paper but should use it during an evaluation period first; for those flying Part 121 or Part 135 operations, the answer is probably still “yes,” Zimmerman said, but you may have to fill out some paperwork. Zimmerman offered practical tips for novice iPad users, advising on topics from whether to spend the extra cash for 3G to how to configure it for in-flight use.

Thinking of buying an iPad, or turning yours into a flying tool? Check out these five tips from Zimmerman’s presentation.

With 16, 32, and 64 GB offerings, pilots can get by with 16 GB, he added, as all the charts in the United States typically add up to no more than 8 GB. But consider that you may download chart updates a couple of days ahead of time, bumping the storage closer to 16 GB. If you use your iPad for nonaviation purposes too, you may want to opt for 32 GB.

Frequent travelers may want 3G data, but others may not need it. The built-in GPS in the 3G devices doesn’t work as well in the air as on the ground, Zimmerman said, and pilots with Wi-Fi-only iPads can buy a more reliable external GPS for around $100.

Apple publishes an operating temperature for the iPad between 32 and 95 degrees Fahrenheit and a max operating altitude of 10,000 feet. Practically, pilots have used the iPad outside those parameters. Zimmerman said the only time he has had the iPad overheat was when he left it in direct sunlight in the glareshield; it shut itself down to prevent damage. Pilots can deal with another limitation, the prospect of GPS interference, by configuring the iPad correctly for flight.

Preflight your iPad just as you do your airplane. Zimmerman recommended charging the battery of the iPad, and its wireless accessories, before each flight. (Pilots also might consider a backup power option, as weather and GPS accessories can cut the iPad’s eight- to 10-hour battery life by 30 percent, he said.) Make sure your apps are up to date, and load your favorites and routes. To maximize your battery life, turn the screen brightness lower and turn off Wi-Fi, 3G, or Bluetooth if you don’t need them, Zimmerman said. And don’t leave the iPad on the glareshield.

Sporty’s offers a newsletter and website to help pilots make the most of their iPads.