Get the app Get the app
Already a member? Please login below for an enhanced experience. Not a member? Join today
News & Media UFO sighting: Don Newman 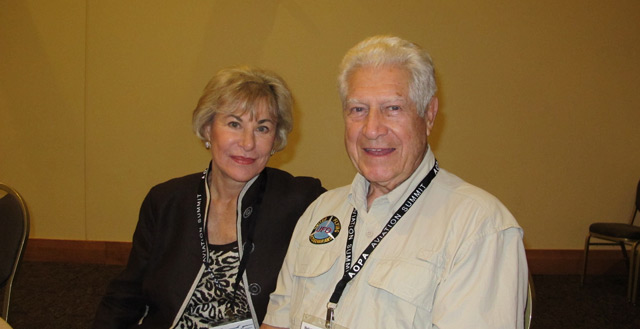 Astute attendees of AOPA Aviation Summit may have noticed a number of UFOs among the taildraggers, turboprops, and other familiar airframes around the Palm Springs, Calif., convention center.

These UFOs are rare, indeed—but they’re not unidentified. They’re the United Flying Octogenarians, a group of about 1,250 men and women who have flown as pilot in command at age 80 and above.

“It’s kind of an exclusive group,” said UFO President Don Newman, 89, who attended Summit with his wife, Ginger. The organization held its annual meeting in conjunction with Summit, and Newman said the Oct. 11 luncheon drew 71, about a third of whom were spouses.

Newman was a B-17 pilot and instructor in the U.S. Army Air Corps and today flies a V-tail Bonanza. He has logged 1,000 hours in the B-17 and 7,000 total hours, racking up certificates and ratings for airplane single-engine land and sea, airplane multiengine land, and instrument airplane, as well as CFI and CFII. He has owned aircraft ranging from his first, a radial-engine Howard DGA-15P, to a pressurized Cessna 414. The energetic octogenarian recently won a spot landing contest at a Florida meeting of the group.

The Florida pilot, the former undersecretary of Health and Human Services under President Ronald Reagan and U.S. minister to the International Civil Aviation Organization (ICAO) under President George H.W. Bush, recalled seeing AOPA President Craig Fuller in cabinet meetings during Fuller’s time working in the White House. He didn’t know Fuller was also a pilot until later, he said. The two pilots ran into one another again in the Learning Pavilion at the exhibit hall, where Ginger pointed out other UFOs who had made their way to Palm Springs for Summit.