Get the app Get the app
AOPA will be closed July 4th, in observance of the Independence Day holiday. We will reopen at 8:30 am ET on Tuesday, July 5.
News & Media Avionics: Time to join the fray

Avionics: Time to join the fray

Subscription-free weather and traffic from Garmin

Subscription-free weather and traffic from Garmin

At last, the long-touted benefits of the ADS-B system are beginning to arrive in general aviation cockpits—and Garmin’s new GDL 39 receiver is the first to make us reconsider our earlier advice that pilots should wait until closer to the FAA’s 2020 deadline to buy new equipment.

For $800, Garmin’s portable ADS-B receiver shows weather and, with some important limitations, aerial traffic—and it does so on Apple iPads, Android tablets, and Garmin portables (696 , 796 and Aera) as well as the G3X (a non-TSO PFD based on the 696). Traffic (but not ADS-B weather) is available on the 396 and 496.

I recently flew with a GDL 39 from Garmin headquarters in Olathe, Kansas, to AOPA’s home base in Frederick, Maryland, and the weather and traffic information it displayed on an iPad vastly improved pilot situational awareness during the 815-nm trip. (The GDL 39’s picture of weather and traffic also closely aligned with information provided by XM Satellite Weather and TIS displayed on a Garmin 696 in the same cockpit.)

Installing the GDL 39 was a simple matter of placing it in the vacant back seat of a Vans RV–4, raising its antennas to receive ADS-B signals, and pushing the power button. Two LEDs—one green indicating its 4-hour lithium-ion battery was charged, and one blue showing Bluetooth readiness—quickly illuminated. I placed the iPad (running Garmin’s Pilot app) on my kneeboard about three feet away from the transceiver, and taxied to New Century Airport’s Runway 18 to begin the journey east.

One of the ADS-B system drawbacks was immediately apparent. Unlike XM Satellite Weather, which sends its Nexrad images from above allowing pilots to read them on the ground, ADS-B weather information is distributed via ground stations—so it’s seldom visible on cockpit displays until airplanes are flying. On this day, a colorful blob of violent weather was churning across Michigan and northern Ohio just north of my route. The nasty weather showed up immediately and in detail on the XM display, but it didn’t appear on the ADS-B display until I was leaving the airport traffic area.

Much has been said and written about comparing the nuances of the XM versus ADS-B weather information. But on this July morning, both agreed that there were wide areas of green and yellow with concentrated, embedded lines of red and purple—and that told me all I needed to know: Stay away. 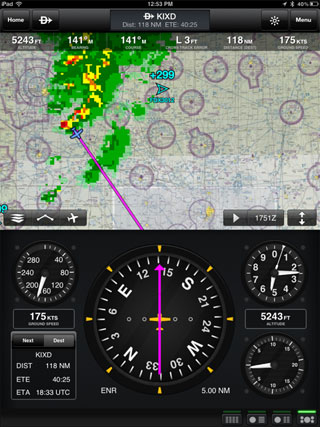 Pilots can display weather and traffic information from the GDL 39 on their gadget of choice (in this case, an iPad with the Garmin Pilot EFB). The GDL 39 receives weather all the time, but airplanes must send ADS-B Out signals in order to get the full traffic picture.

There are two ADS-B frequencies in the United States (1090 and 978 MHz) and the GDL 39 uses both of them. Airliners show up as white diamonds with the airline code and flight number (DAL FL1020, for example, is Delta Air Lines Flight 1020), as well as altitude (above or below) and an arrow showing relative movement. These aircraft already broadcast ADS-B Out signals on 1090, and the GDL 39 receives their signals directly (air to air).

Traffic closer to my altitude, however, was largely invisible because those airplanes (and mine) carry Mode C or Mode S transponders. Getting a full traffic picture from the GDL 39 requires broadcasting an ADS-B Out signal, and my airplane wasn’t doing it. Occasionally, however, when an airliner flew within 15 miles, the GDL 39 in my airplane would “hitchhike” on its signal and display Mode-C traffic by linking to a ground station (ADS-Rebroadcast).

That traffic view offers a tantalizing glimpse of the fuller picture we’re all likely to see post-2020. But knowing I was only getting a fragmentary traffic view was almost worse than none at all. And, believe it or not, that’s how the brain trust in charge of the ADS-B system wants it.

The FAA goes to a lot of effort to block traffic signals as an “incentive” for all pilots and aircraft owners to “participate” by buying and installing ADS-B Out equipment. As further inducement, the agency is doing away with its Traffic Information System that currently shows traffic in airplanes equipped with Mode S transponders.

There’s much talk among avionics manufacturers about the promise of future low-cost ADS-B Out equipment now in development. Such welcome possibilities could greatly lower the cost of complying with the FAA’s ADS-B Out mandate by the January 1, 2020, deadline. And once our airplanes have an approved ADS-B Out source, adding the benefits of subscription-free weather and traffic through innovative products like the GDL 39 is a no-brainer.

For pilots who receive weather only, the GDL 39 (and others such as Stratus developed by Foreflight and Sporty’s) pays for itself in less than two years (XM subscriptions are currently a minimum of $30 a month, excluding fees and hardware). For those whose airplanes are currently equipped with Garmin Mode S transponders, upgrading them to ADS-B Out costs about $1,200 (and allows the GDL 39 to provide a full traffic picture as well as weather).

And for the vast majority of us with Mode C transponders, adding ADS-B Out remains costly—but hopefully less so in the near future. And the benefits of subscription-free weather and traffic take away at least some of the sting from the ADS-B mandate.