Get the app Get the app
AOPA will be closing at 2:30pm ET Wednesday, November 23rd, and will remain closed Thursday and Friday in observance of the Thanksgiving holiday. We will reopen Monday November 28th at 8:30am ET.
AOPA Members DO more LEARN more SAVE more - Get MORE out of being a pilot - CLICK HERE
News & Media Never Again: Mountain meandering 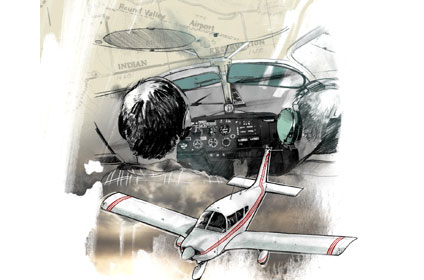 My friend Glenn co-owned a 1968 Cherokee 180 and wanted to visit a mutual friend who was staying at a cabin in Happy Camp, California. He was slowly taking lessons, so we flew together a lot. The little Cherokee was a basic VFR airplane with questionable VOR reliability, but everything else worked fine.

I was confident as a 100-hour-plus pilot and looked forward to the trip from Reid-Hillview Airport in San Jose to Northern California. The weather forecast called for some clouds, but I knew there was VFR weather inland a little over the Central Valley and along Interstate 5. This was long before GPS or even Loran, so it was going to be pilotage and dead reckoning all the way.

We loaded up the airplane looking forward to the approximately three-hour flight. With about five hours of fuel on board and baggage stowed, we departed, climbing slowly to the northwest and Napa. This is where we came upon the clouds.

I had a decision to make: go under them with rising terrain ahead or climb above them and see if the VOR would work and use dead reckoning as a backup. I added power and we started climbing. As we continued northwest the clouds continued to build in the summer heat. We got to 5,500 feet and then 7,500 feet, where we leveled off for a while. Those big puffy clouds kept rising up to us. Nothing convective, but they just slowly kept billowing higher and forcing me to continue climbing.

Full throttle, pitch up, and I started climbing again. Now the clouds were building a little faster than we were climbing, so I had to deviate off course and navigate my way around them. Passing through 9,000 feet, it grew colder, and we were starting to get worried about our course—and when would these clouds stop developing?

We eventually limped up to near 12,500 feet. I knew I had to stop climbing, as we didn’t have oxygen, and the Cherokee just wasn’t going to climb any more. If I didn’t get us out of here, we would end up in the clouds with poor navigation equipment and my three hours of hood time from my training a year ago to save us.

We looked for breaks in the clouds, hoping to be able to get under them and find an airport. We hadn’t seen a break since leaving Napa. I looked out the left window and as we rounded another tall cloud, there was a perfect hole right over what looked like an airport. I headed toward it and sure enough, I could see writing on the taxiway: “Round Valley.” Woo hoo!

We weren’t as lost as I had feared as I quickly located the airport on the chart and plotted a course inland toward clear skies and away from the mountains. I called ATC and requested flight following and told them we were VFR above the clouds and heading inland but we needed to get down.

We were identified on radar as we headed east to clear skies. I spotted another break in the clouds, and being able to see the ground was a powerful draw to descend. The hole was big enough to get down, and I advised ATC we were descending.

The plan was to fly east until we spotted Interstate 5 and follow it north. We landed at the first airport we saw, Red Bluff Municipal, to call Flight Service for an update. No cell phones or onboard weather via XM—this was old school flight planning. Thinking we had five hours of fuel, I didn’t bother checking the levels at this point, as we had been two or three hours in the air.

Flight Service reported more clouds and overcast along the coastal areas, but we weren’t sure if the weather at Happy Camp was clear enough. So we decided to keep flying north as far as we could, knowing the valley was clear and we’d overnight in a motel if needed. I wasn’t giving in to get-there-it-is. Or so I thought.

We launched again to see how far north we would get. We overflew Redding Municipal Airport, just 22 nm away, and then turned back to wait out the weather. Once again the day’s events corrupted my thinking and I didn’t check the fuel.

We launched again and got closer to the mountains to try and pick our way toward Happy Camp, this time underneath the overcast that put us closer to the tops of the mountains. The clouds seemed to lower the farther inland we got, and I realized we just weren’t going to make it. We turned around again and landed at Redding. This time I did check the fuel gauges.

What’s this on the left tank? Bare sheet metal—it was empty. I put the cap back on and checked the right tank. I saw some sloshing but not much. I dipped the tank and discovered about six gallons. We had our 30-minute reserve, but I sure didn’t know that as I was flying. Dodging clouds had preoccupied me and I hadn’t checked the status of all the systems.

Over dinner we told our story and reflected on what might have caused us to burn so much fuel. We had spent so much time trying to climb and we were at full throttle for so long and also possibly not leaning it properly that our fuel burn rate was much higher than I planned for in cruise. I had initially planned a much lower altitude for most of the flight with a short climb if needed.

Now as I close in on 1,000 hours and am a CFII, I burn this lesson into my students. Always check fuel before each leg, as it can save your life. Not a bad trade-off for spending a minute to check fuel on board.

Ron Klutts lives in Mountain View, California. He is a CFII with approximately 1,000 hours.