Get the app Get the app
Already a member? Please login below for an enhanced experience. Not a member? Join today
News & Media Wx Watch: Horrible highs 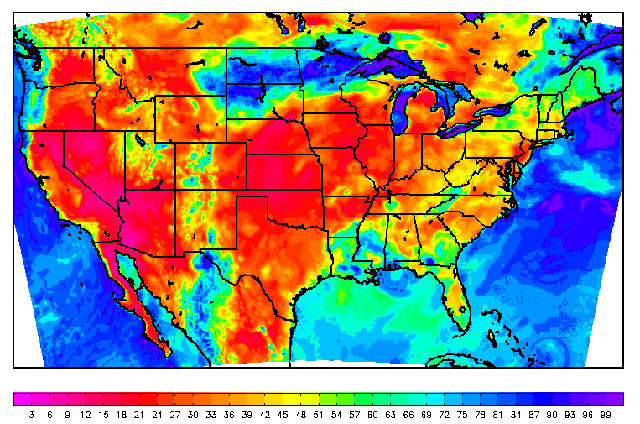 The drying effects of the high are apparent in the relative humidity chart. Areas in red show RHs below 24 percent. The blue area of 80- to 90-percent RHs over the northcentral states is associated with precipitation north of the low pressure system and stationary front affecting those states.

From our earliest days in ground school, we’ve all been conditioned to equate high pressure with good weather conditions—meaning good visual meteorological conditions (VMC). That’s a pretty good rule, but as with anything meteorological, there are exceptions. You can have good VMC but still face a lot of problems when high pressure dominates.

In the warmer months, high density altitude issues come to mind. Remember that high pressure is basically a large area of descending air. And if air cools when it rises, then the converse is true: It warms when it descends. Now we have a situation where the air under the influence of a high becomes warmer and warmer the closer it gets to the surface. It may be a comfortable 20 degrees Celsius/68 degrees Fahrenheit at 5,000 feet, but thanks to adiabatic warming, temperatures at sea level could easily be 33 degrees C/90 degrees F. Throw in a short runway, a runway obstructed by trees or obstacles, or a “one-way” runway experiencing a bit of tailwind, and you’ve got a recipe for risky takeoffs and landings. Of course, higher-than-standard temperatures at high-elevation airports will present the same problems. 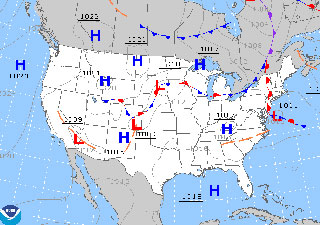 July 9, 2012, was just one day under the influence of several days' worth of high pressure over the United States. The surface analysis chart shows the center of the high over Kentucky and Tennessee, but its effects ran from the Midwest to New England, and as far south as Florida.

Other problems crop up when a high’s descending air traps smog and haze at lower altitudes, often beneath persistent temperature inversions. Instrument meteorological conditions (IMC) on an otherwise bright summer day? It happens.

This most recent summer gave us a good example of how a large high pressure system can make for some miserable flying weather. For weeks on end, a mammoth high pressure system parked itself over the central United States. The result was 90-plus Fahrenheit surface temperatures over much of the nation, and record-breaking stretches of 100-degree-plus temperatures. All that warm air did more than boost density altitudes. As high-pressure’s air descends and warms, all that heat evaporates any moisture and lowers dew points and relative humidities. This is how the fire weather (a combination of high temperatures, low relative humidities, and high winds) over Colorado ended up creating massive forest fires.

Humongous high pressure systems are a main summer weather feature east of the Rocky Mountains. As our summer sets in, the sun’s rays hit North America more directly, bring warm air northward, and colder temperatures retreat to Canada. Now the tendency is for the jet stream to move north as well, following the zone of temperature contrast to more northerly latitudes.

What’s left is uninterrupted high pressure, from the Rockies east, and from Michigan to the Gulf of Mexico. Once in place, a high this big stagnates and prevents any fronts from breaking the high’s hold. That’s why these sorts of highs are called blocking highs. They’ll stay in place, too—for a week or more—until a trough aloft forms and eventually brings cold fronts strong enough to
provide relief.

Continental highs aren’t the only semi-permanent features of America’s summer weather. The Bermuda high—so named because its center is parked off the southeast coast near Bermuda—is another big, big player in aviation weather.

It’s easy to imagine how the Bermuda high works. First off, it’s over the Atlantic, so it’s a moist air mass. Its clockwise flow sends moist air inland, and because of the flow pattern winds will be out of the south. This means warm, muggy air from Florida and the Gulf of Mexico spreading over the entire eastern half of the United States. Unlike the big continental highs we just discussed, the Bermuda high is loaded with the kind of moisture that can create and perpetuate widespread thunderstorm activity. These conditions can last for days or weeks because, like continental highs, the Bermuda high tends to stay locked in place for pretty much the entire warm season. Go ahead, look on a surface analysis chart right now. Chances are, there’s a big “H” off the southeast coast.

It would be wrong to say that continental or Bermuda highs don’t move. They do, from west to east as most other weather systems do in the Northern Hemisphere. When their centers move east, the southerly wind flows off their western areas help fuel strong cold fronts and thunderstorm outbreaks as the warm air rams into advancing colder air. This is one reason why the presence of this so-called “back side” of high pressure systems should be a heads-up for pilots. The hot, damp air of the back side is destabilizing, and its arrival on the scene often means convective sigmets will soon follow. Still think all highs are nice? 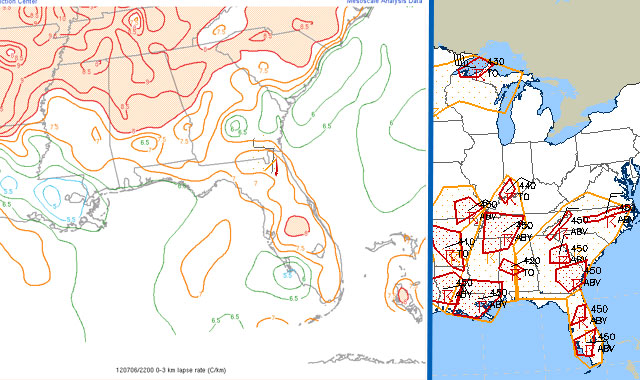 A July 9, 2012, chart showing lapse rates from the surface to 10,000 feet (left) shows rates of eight to nine degrees per thousand feet; the standard lapse rate is two degrees. This means relatively cool air, so any heated rising air parcels will get a huge boost as they ascend. And, sure enough, there are plenty of convective sigmets (right) to prove it.