Get the app Get the app
Already a member? Please login below for an enhanced experience. Not a member? Join today
News & Media Lost prop on checkride: Did he pass?

Lost prop on checkride: Did he pass? 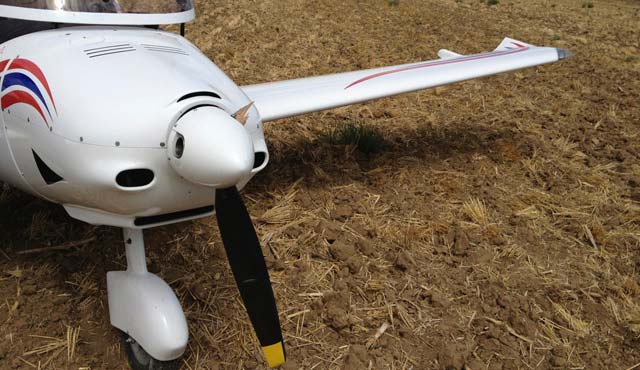 The checkride was going smoothly, and Brian Garrett was mentally prepared for a simulated emergency over Colorado on Sept. 1.

Then, the prop fell off. Two-thirds of it, at least. One blade had completely sheared, and probably smacked into a second blade as it detached, leaving the TL-2000 Sting Sport light sport aircraft without a working powerplant. There was a loud noise, lots of vibration, and then relative silence. Garrett, 43, had already logged about 170 hours as a sport pilot, and this was his private checkride with designated pilot examiner Drew Chitiea. On the plus side, the LSA Garrett co-owns boasts a 17-to-one glide ratio, so at about 2,500 feet above ground, they had a little time to work with.

“I reached over and flipped the transponder to 7700 and changed the radio to 121.5 and just started working on the whole procedure,” Garrett recalled in a telephone interview with AOPA. “My mindset was already that I was going to have to do that at some point in time during the flight.”

Garrett said there were several good emergency landing field options to choose from below, and he set his sights on a freshly plowed farm field, setting up for a dead-stick landing, his first, on an actual soft field—also a first. Garrett said ATC had a few questions about their situation following confirmation of the initial Mayday, and Chitiea offered to handle those while Garrett focused on putting his training to work. 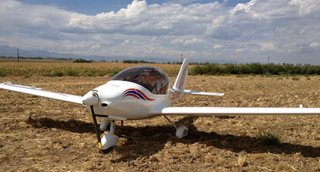 “I was really much more concerned about just flying the plane,” Garrett said.

Previous study, including lessons from Flight Training magazine (Garrett is a member, and avid reader), helped Garrett set up his final approach, and he put the LSA on the ground as softly as he could. Garrett estimated that the soft dirt brought the aircraft to a stop in about 100 feet, and the pair wasted no time getting out.

Garrett had just two questions at that point: “The first was, ‘Are you OK?’ and the second one was, ‘Did I pass?’” Garrett recalled. He was anxious that the checkride had been cut short before all maneuvers were completed, that it might negate his effort.

Garrett got affirmative answers to both questions. A reporter and photographer from the Times-Call of Longmont, Colo., soon arrived to document the results, including a relatively unscathed aircraft, and completely unscathed occupants including a newly minted private pilot. Chitiea told the paper Garrett had “demonstrated his competency.”

Garrett, an IT professional, plans to continue his flying career, though he’s in no hurry to repeat the checkride experience.

“Would I want to go through that again? No, not necessarily,” Garrett said. “Having done it, I can sort of reflect back and say I can definitely do it, and I know the things I should pay attention to.”