Get the app Get the app
Already a member? Please login below for an enhanced experience. Not a member? Join today
News & Media Splashy paint scheme serves a cause

Splashy paint scheme serves a cause 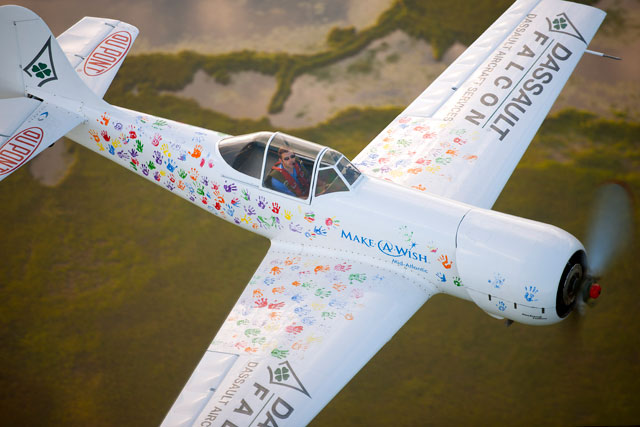 Dassault Falcon Jet took a decidedly hands-on approach in its effort to create an eye-catching aircraft paint scheme to raise money for the Make-A-Wish Foundation.

The company’s Wilmington, Del., service facility painted a single-engine Yakovlev Yak 50 blank white and guests (including Delaware Gov. Jack A. Markell) placed their 270 colorful handprints on the airplane’s wings and fuselage. The effort raised about $3,000 in donations for the Make-A-Wish foundation (which helps children with life-threatening illnesses fulfill their most cherished desires) and left aircraft owner Olivier Langeard, a Dassault employee and aerobatic pilot, with a one-of-a-kind paint scheme.

“Aircraft owners are always trying to one-up each other when it comes to the appearance of their airplanes,” said Langeard, who learned to fly in his native France. “But it’s going to be hard to top this one. It gets a lot of attention and draws awareness to the Make-A-Wish foundation wherever it goes.”

Langeard displayed his colorful Yak 50 at EAA AirVenture in Oshkosh, Wis., this year, and he plans to take it to other aviation events around the country.

“We used the same processes in stripping, anodizing, and painting this airplane as we use on jets,” he said. “The quality of the work is exceptional—and it serves a great cause with the Make-A-Wish foundation of the Mid-Atlantic.”