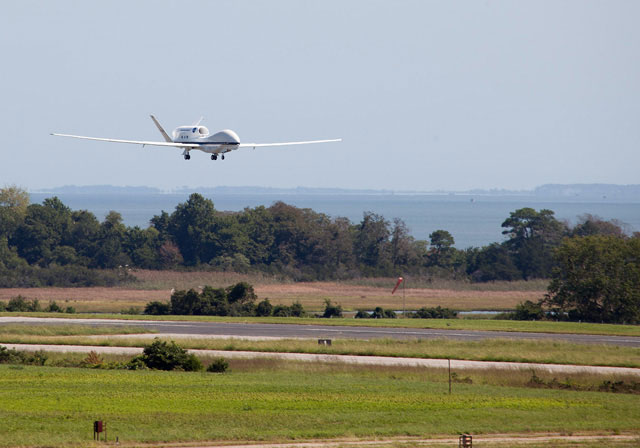 NASA is taking its hurricane hunt to a new level, launching a pair of customized Global Hawk unmanned aircraft systems from the East Coast to scout storms in the Atlantic Ocean.

The UAS project is a five-year effort, expanding on similar projects in the past, with a goal of better understanding hurricanes, and refining the computer models used to predict them. The hurricane hunters maintain a safe distance from the storms, patrolling high above, rather than inside the wind circulation and turbulence. NASA has set up procedures to keep their distance from other aircraft as well.

Pilots based at the agency’s launch facility at Wallops Island, Va., maintain visual contact with the Global Hawks until they reach an altitude of about 30,000 feet, at which point control is handed off with a phone call to a ground station in California, where controllers monitor the mission and adjust the programmed route as necessary.

They’re also on the phone with ATC.

“This communication is vital as air traffic controllers provide the altitude and number of other aircraft sharing the same area of the U.S.'s National Airspace System and international air space as the NASA aircraft,” the space agency reported in August. “When the Global Hawk reaches an altitude of between 60,000 and 65,000 feet, there are few aircraft competing for space.”

Scientists hope the Global Hawks can settle a debate about the Saharan Air Layer, or SAL, a warm and dusty air mass that blows from Africa’s Sahara Desert. Research has produced conflicting views of SAL dynamics, according to Scott Braun, lead scientist on the Hurricane Severe Storm Sentinel project.

“We are going out to try to determine what effect, if any, the SAL really has on Atlantic storms,” Braun said in a Q&A posted on NASA’s website.

NASA flew the Global Hawks above Hurricane Leslie Sept. 7, and set a course for a yet-to-be-named storm on Sept. 10. This is not NASA’s first foray into UAV storm study: Similar missions have been mounted in the Pacific, though they were one-year efforts. The H3 project is slated to be the most persistent and far-reaching to date.

This time-lapse video shows Hurricane Karl as seen from NASA's unmanned Global Hawk aircraft during a 25.3-hour flight Sept. 16 and 17, 2010. Eight of the Global Hawk's 20 passes over the hurricane were flown in coordination with NASA's DC-8 and WB-57 science aircraft flying below. Global Hawk was flying as part of NASA's GRIP mission to study how tropical storms form and develop. (No audio.)