Get the app Get the app
Already a member? Please login below for an enhanced experience. Not a member? Join today
News & Media Dimple aerodynamics: A hole in one?

Dimple aerodynamics: A hole in one? 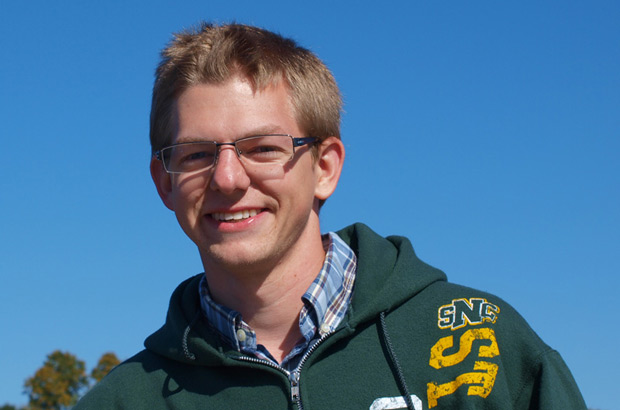 Erik Miller was still too young to rent his own hotel room when he set out—with a friend—on a 16-hour drive from Wisconsin to Kansas to prove a theory about golf balls and airplanes. The results of that effort, undertaken as a high school student, have just been published in a peer-reviewed technical journal of aviation design, the Journal of Aircraft .

Miller, 20, now a senior at St. Norbert College in De Pere, Wis., is not alone in exploring an aerodynamic principle borrowed from the golf ball industry that could one day help bush pilots get off the ground a little faster. Most of the others working to expand understanding of vortex generators have undergraduate and graduate degrees.

“It’s really exciting,” Miller said of his byline in a peer-reviewed technical journal published by the American Institute of Aeronautics and Astronautics.

With a gift for math and a keen interest in aviation (he earned his private pilot certificate in 2009 at age 17), the high school junior set out to prove that the dimples of a golf ball can improve the aerodynamics of airplane wings. 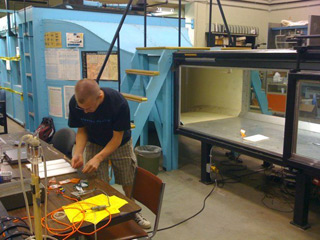 The dimples generate vortices as a golf ball moves through the air, tiny areas of turbulence that help preserve layered airflow and create lift by expanding what’s known as the boundary layer. Golf ball designers have in recent years taken a closer look at the dimples, using sophisticated computer modeling to fine-tune the size and placement of dimples to extend the flight of the ball. Aircraft designers have used vortex generators for years—the tiny vertical fins lined up along the top of the wing of many large aircraft are there for the same basic reason as the dimples of a golf ball.

Miller hypothesized that dimples could be applied to aircraft wings to help prevent separation of airflow (stall) at high angles of attack—particularly on takeoff. As a high school student, finding a wind tunnel to test this theory proved to be a significant hurdle. He made a lot of inquiries, “just talking to every university I knew that would possibly have a wind tunnel,” Miller recalled. “They weren’t very willing.”

At last, Wichita State University agreed to let the teen work in the school’s wind tunnel, and Miller set out with a friend (who was 18, and able to rent a hotel room) to put theory to the test. He found that dimples would indeed increase lift and delay separation, though only at high angles of attack. 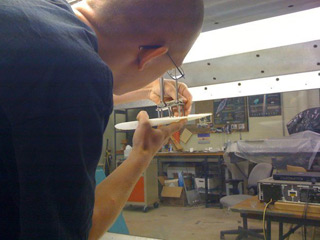 As a high school student, Erik Miller tested a theory about dimples in the wind tunnel at Wichita State University. Photo courtesy of Erik Miller.

“In a pitch up angle it would increase the boundary layer,” Miller said. Straight-and-level flight is another story, and there are many profiles Miller never tested.

His article, “Effects on the Boundary Layer Caused by Inclusion of Dimples at Varying Depths,” was published after years of revision, aided by high school teachers and college professors who encouraged him to keep at it. While the basic theory, formulas, and calculations remained unchanged, Miller said his first draft didn’t earn the approval of the journal’s editors.

“My writing wasn’t really what they were familiar with,” Miller said. “I needed to cut it down.”

Miller said he hopes others will continue to explore the potential of making airplanes fly better—at least on short-field takeoffs.

“The research I was able to do only consisted of four different models,” Miller said. “There’s so many more variables on positioning and the size of the dimples.”

Miller has meanwhile changed course away from engineering as a profession, finding he likes mathematics best. He’s aiming for a career in the actuarial field, and hoping to pass the torch to another young gun.

“I envision eventually finding an aeronautical engineering student and encouraging him to take the project and finish it up,” Miller said.

He does plan to keep flying—after college, when he has a little more time, and money.